How the ‘mysterious holes’ formed in the Yamal peninsula 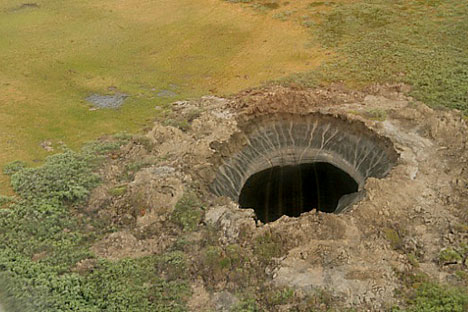 Noted scientists tell RIR that the holes found on the Yamal Peninsula that have sparked so much interest on the internet have no known analogues on land, but could indicate a serious degradation of the permafrost, with global implications.

Any such holes known to science have only previously been discovered at the bottom of the Arctic seas. However, according to Doctor of Technical Sciences Vasily Bogoyavlensky from the Institute of Oil and Gas Issues at the Russian Academy of Sciences, even these have virtually never been studied.

In a practical sense this means that, in the absence of fundamental research, scientists will not know the conditions in which these holes can form and the regions in which they can form.

If they are sufficiently analogous to the holes in the Kara, Pechora, Barents and other seas (these are known by the scientific term ‘pockmarks’) and are formed as a result of natural gas explosions, then this could pose a significant threat.

“If this is the case then it could cause ships to sink, which has happened on more than one occasion abroad,” explained Bogoyavlensky. “In 1995 the Russian vessel Bravenit almost sank in the Pechora Sea as a result of an underwater gas explosion that occurred while a shallow engineering shaft was being drilled.” 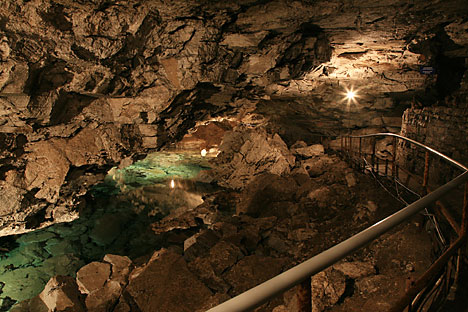 The unique Kungur ice cave, one of the largest karst caves in European Russia, is located in the Filippovka village, 100 kilometers off the city of Perm. Pictured: Grotto with an underground lake. Source: Igor Kataev / RIA Novosti

According to the scientist, the Arctic seabed has, as far as can be told, the same geological structure as that found on the Yamal Peninsula, with one exception: The ground is covered with a thick layer of permafrost, which is all but absent from the northern seas.

“The majority of what is now the Arctic seabed 10-15,000 years ago was land with permafrost formations. Apart from that, this huge area was covered by a powerful glacier, part of which survives to this day in Greenland,” Bogoyavlensky added.”

This is a ground and rock layer, the temperature of which remains constant at below 0º C for a very long time – from 2-3,000 to several thousand years. In the permafrost zone, ground water exists as ice that can be more than 1,000 m deep.

According to data from the Earth Cryosphere Institute at the Siberian Branch of the Russian Academy of Sciences, more than 70 percent of Russia is covered by a layer of permafrost, which amounts to around 12 million sq km. In the world as a whole, permafrost covers one quarter of the total landmass.

“A significant part of the Paleo-permafrost zone in the Barents and Kara seas has been melting up until the present day. In some areas, the frozen ground has been retained, particularly close to the shore. There is frozen ground in the Kara Sea but this is breaking down.”

Since there are hundreds and thousands of pockmarks on the seabed, this could indicate that further degradation of the permafrost would lead to new holes appearing in the future.

The permafrost is a huge reservoir of greenhouse gases, and specifically of methane, which is causing the atmosphere to warm up.

Since the permafrost occupies such an enormous area, the thawing of the permafrost as well as other processes have a direct effect on the global climate. According to forecasts conducted by United Nations experts, this in turn could lead to a rise in global sea levels of a meter within this century.

A lake is going to form

A permafrost expert with more than 40 years’ experience, Marina was one of the first to arrive at the mysterious hole close to Bovanenkovo – one of the largest gas deposits in Russia.

“For me the biggest surprise was that the location appeared untouched by any kind of human activity. My first thoughts were that this hole was the result of an accident that occurred whilst drilling for natural gas,” Leibman explained to RIR.

Scientists did not risk venturing down into the hole: There was a very high risk of it collapsing, but they did lower a video camera down to the bottom.

There is a small lake at the bottom of the hole, formed of dirty water. As the temperature is above freezing, but the walls are frozen, this water, which is mixed with clay, is draining down the walls and collecting at the bottom.

According to Leibman it could take 2-3 years for the hole to fill with water and become a lake.

By all accounts, the hole could have been formed as a result of an increase in temperature in the local climate. Does this mean that the topography of the Yamal Peninsula is suited to these cavities?

“It is not the case of course that the entire topography is suitable, since specific conditions need to come together in one location for this to happen. This is linked to the type of rocks found near the surface. It depends on the geological cross-section, on the gas content within the rocks, and the amount of ice,” the scientist said.

Leibman explained that if the ice content is high, and the density of ice is half that of rock, processes begin to work to redistribute matter in the soil, adding that the gas would need to be at a depth accessible to warmth seeping down into the rock from above.

“It would take several decades for the present rise in temperature to reach down to a depth of 100 m. I think that the temperature wave would have travelled 20 m underground by 2012. In the location where the hole formed the soil had thawed to a depth of 73 cm.”

As Leibman noted, there is a similar hole at Taymyr in northern Siberia, and in theory this could also happen in Chukotka (in the Russian Far East) but there is no reason to expect new holes to appear south of 69-70º in northern latitudes.

“Around 10,000 years ago it was warmer than it is now, so the permafrost had melted in more southerly latitudes. The permafrost at these latitudes is not solid any more, but is isolated, and interrupted by river valleys and under deep lakes. Whatever needs to escape [this refers to methane - RIR] has already escaped long ago. There is no longer any need for the gas to fracture the permafrost since it can escape via the rocks, which have thawed out,” Leibman explained.