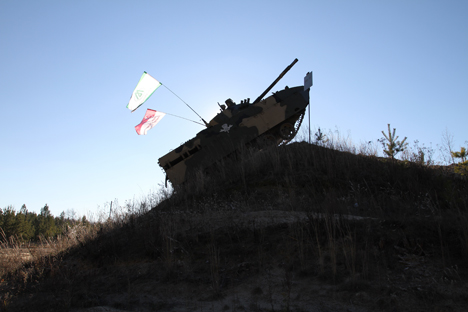 The vehicle can be dropped from an aircraft with the crew inside, and move into battle immediately deep behind enemy lines.

The Russian Army has taken delivery of a prototype batch of the modernised BMD-4M airborne assault vehicle as part of its rearmament.  This armoured vehicle can deal a ‘crushing blow’ in a combat scenario. Thanks to its powerful weaponry, large reserves of ammunition and high speed, groups of assault troops are able to literally ‘drop from the skies’ and overwhelm enemy logistics units. The first ‘airborne’ assault vehicle for the ‘blue berets’ entered service in 1968. Today assault troops are taking delivery of a fourth generation vehicle, designed to replace the obsolete BMD-3s.

Eight modernised BMD-4M vehicles were handed over by the manufacturer Kurganmashzavod to the 106th Guards Airborne Assault Division, where the vehicles continue to undergo testing. 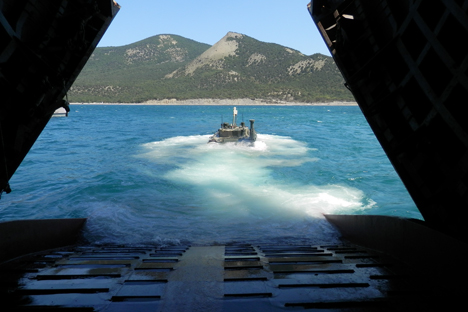 The airborne assault troops are Russia’s elite troops and they have had a long wait for a unique fourth generation vehicle. The BMD-4M differs from its first three predecessors in terms of more powerful weaponry, and its increased reserve of ammunition, which is what the ‘airborne guards’ really needed. The point being that airborne troops do not have tank or artillery support during front line operations.

The new vehicles can be launched from an aircraft and transit to their allotted targets in a matter of minutes at a speed of up to 70 km per hour. The BMD-4M is able to cover 500 km without refuelling.  It would only take the airborne assault vehicles a few hours to bring any state the size of a western European country under full control. Like its predecessor, the BMD-4M can traverse water obstacles without any special preparation. Afloat this armoured vehicle is able to develop a speed of 10 km per hour.

The Chief Designer of the BMD-4M Sergey Salnikov said the vehicle’s strike radius has increased to 7 km as a result of a new artillery gun, which is capable of striking military equipment as well as fortified structures. The automatic reloading of ammunition reduces the physical and psychological burden on the crew, while the automated guidance system can operate in thermal imaging mode. The 100-mm artillery gun fires Arkan guided anti-tank shells almost silently when working at maximum output. These characteristics make the BMD-4M a multi-role, self-propelled rocket and artillery system.

The track-assembly for the BMD-4M is state of the art and easy to control. The gearbox is automatic and the suspension is more balanced, which is very important when there are huge bumps on the road. The commander of airborne assault forces Colonel-General Vladimir Shamanov sat behind the wheel and tested the new assault vehicle. “The BMD-1s and BMD-2s would always begin to vibrate, and it was difficult to understand the vibration amplitude, but this vehicle does not vibrate. It is also very stable in the turn and the control system is simple and reliable. I liked the BMD-4M,” Shamanov said.

Thanks to its designers the BMD-4M is able to negotiate gradients of up to 35 degrees and maintain fire whilst in motion, turning the turret and keeping the target in its sights. 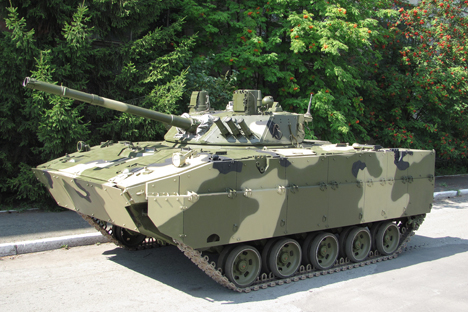 Overall in terms of its characteristics this armoured vehicle is starting to resemble a first class all-terrain vehicle.

The hydro-pneumatic suspension allows the armoured vehicle to alter its clearance. It is able to both hug the ground and rise above it - this is necessary for loading onto an aircraft ahead of a deployment and also for camouflage during combat operations.

The French also tried to create a vehicle capable of being dropped from an aircraft with the crew on board, however after one of the participants in the tests was killed during a drop, testing was stopped. No other European countries have decided to parachute vehicles into battle with soldiers on board.

Viktor Pechenkin, Deputy Chief Designer of the Kurgan Manufacturing Plant said, “Up until now only the Chinese have created an analogue for the BMD-2, however this vehicle is two generations behind the Russian model.”

There are problems with the new Russian design. First and foremost it is very heavy 13.5 tonnes as opposed to 8 tonnes for the BMD-2. The Il-76 transport aircraft is only able to accommodate two vehicles at present. The troops and ammunition as well as the parachute systems add considerably to the weight of the aircraft. Despite the fact that testing is 51 percent complete, the BMD still needs to complete drops with other BMD vehicles from an aircraft.

There are however significant advantages to the BMD-4M modernisation. The BMP-3 armoured vehicle for infantry, developed by the Tula Design Bureau created a unified armament and guidance system platform. This unification makes operation and repair cheaper and easier both in the field and at the manufacturing plant.