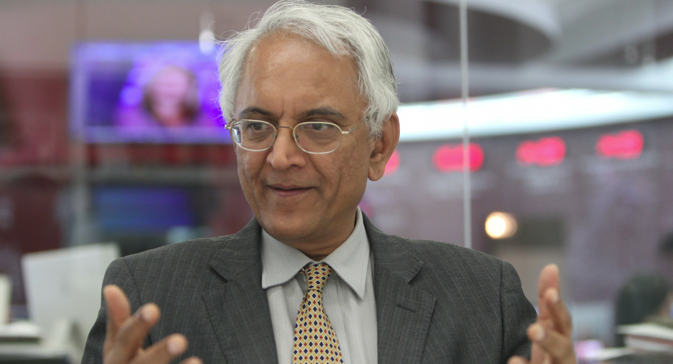 P.S. Raghavan: "I confirm that India is not party to any sanctions on Russia and our business entities remain keen to expand bilateral trade." Source: Sergey Kuksin / RG

On Independence Day, India’s ambassador to Russia is upbeat about bilateral relations and Vladimir Putin’s trip to New Delhi later this year.

What impact do you think Vladimir Putin's visit to India in December is going to have on the bilateral relationship?

We look forward with great anticipation to the forthcoming visit to India of H.E. the President of Russia. When our Prime Minister met the President at the BRICS Summit last month, he said that the new government in India will work successfully with Russia to take our bilateral relations to a new level. In preparation for the visit, both sides are working to step up progress on our ongoing projects of cooperation and to identify new areas of cooperation for the future. We believe that during this visit, our two leaders will spell out their vision for the course of our bilateral cooperation over the next decade.

Which areas of Indo-Russian cooperation do you devote most attention to?

The special and privileged strategic partnership between our two countries covers virtually the entire range of human endeavour: politics, economics, defence, energy, space, education, science & technology and culture. Our intense interactions in all these spheres keep diplomats and government officials of both countries constantly on their toes. In today’s circumstances, we are paying particular attention to further strengthening economic cooperation, creating new educational and research linkages and promoting tourism exchanges. These are areas where potential is enormous and not fully tapped.

Last year the bilateral Working Group on priority investment projects was created. Are there real results, which could stimulate Russia-India trade and investment cooperation?

We have a number of investment projects under discussion in areas like automobiles, pharmaceuticals, coal, fertilizer, energy and steel. As we prepare for the India-Russia Inter-Governmental Commission on Economic Cooperation, we expect not only to expedite progress on ongoing projects, but also to identify new avenues for increasing both trade and investment exchanges. Our new government in India is committed to creating more favourable conditions for foreign investors and particularly promoting the manufacturing sector. I see great prospects of joint manufacture in India of machinery, equipment and products not only for the Indian market, but also to provide Russia with requirements which it is now sourcing from elsewhere.

Is there any progress in developing economic cooperation between India and the Eurasian economic union of Russia, Belarus and Kazakhstan?

We have traditionally close relations with Russia and also with Belarus and Kazakhstan. Our trade and economic cooperation with all three countries are showing an upward trend. We believe that a closer engagement between India and the Eurasian Customs Union - which will soon become the Eurasian Economic Union - will be mutually beneficial and provide further impetus to our efforts to create a quantum jump in our economic cooperation.

We have already commenced a dialogue to look at all aspects of this engagement and to recommend the future course of cooperative action.

In your opinion, how soon it would be possible to begin making mutual payments between Russia and India in rubles and rupees?

Our two countries have been discussing trade in national currencies as an initiative that can significantly increase the volume of bilateral exchanges of goods. Our Central Banks have recently set up a Joint Working Group to work out modalities. We would like to see an early completion of this exercise.   There have also been talks between the Export-Import Bank of India (EXIM Bank) and the Vnesheconombank for a guarantees cooperation arrangement, by which they would facilitate loans in local currencies for Indian and Russian companies seeking to invest in each others’ countries. This arrangement could boost mutual investment.

Do you see the West-imposed sanctions on Russia as an opportunity for Russia and India to explore closer cooperation with each other? In what areas?

I would not like to look at India-Russia trade and economic cooperation through the prism of external relationships. We have tremendous opportunities bilaterally which we should exploit. The areas of cooperation which I have mentioned are exciting in themselves and of great mutual interest. Of course, I confirm that India is not party to any sanctions on Russia and our business entities remain keen to expand bilateral trade.

How is the India-Russia roadmap on nuclear energy cooperation progressing? Are we likely to see more agreements to build nuclear power plants in different parts of India?

Our cooperation in nuclear energy has made excellent progress and is moving from strength to strength. The first unit of the 1000 MW Kudankulam Nuclear Power Plant – set up with Russian assistance – has achieved 100 percent capacity. Work on the second unit is progressing very satisfactorily. India and Russia have now signed an agreement for the third and fourth units. We are also in discussions on a number of other areas of cooperation in nuclear energy.

This year seems to have a lot in store in the field of defence cooperation between our countries: Indra naval drills have taken place recently in July, then in September-October Indra terrestrial drills are going to be held. Do you think it means the new quality of Indo-Russian defence partnership?

Our recent Joint Naval Exercises off the Russian Far-Eastern Coast is another demonstration of the close relations of friendship and trust between the Armed Forces of our two countries. Similar Joint Exercises between our Armies and our Air Forces are also planned in the near future. You perhaps know that the Indian Army is right now participating in the World Tank Biathlon 2014 organized by the Russian Army in the Alabino Ranges.

You noted the high standards of education of the Far Eastern University during your recent visit to Vladivostok and said that you would like to see more cooperation in this area between the two countries. In your opinion, what steps could facilitate student exchange between India and Russia, and what are challenges that need to be overcome?

You are right. I was very impressed by the Far Eastern Federal University – their beautiful campus and the strides they are making to achieve a level of excellence comparable to the top Universities of the world. I have seen similar developments in St. Petersburg State University, Kazan Federal University and Moscow State University. This is a story that has not been adequately told in India and hence our educational linkages are not at the desired level. India and Russia have recently launched a number of joint research projects in science and engineering linking Universities in our two countries. We need to build on this to have more exchanges of students and faculty, as well as doctoral and post-doctoral fellowships. We have a few thousand Indian students studying medicine in Russia. We can multiply that figure manifold, if our students also avail of educational and research facilities in science and engineering disciplines, particularly in disciplines where courses are offered in the English language. Our Prime Minister has also mentioned an idea which we are exploring: to establish more facilities for teaching Russian in India, so that Indian students can thereafter directly enroll for courses of higher education in Russia. We are also looking at the logistical factors which affect the enrolment of Indian students in Russian Universities. This includes creating easier conditions for visas, defining the role of contractors, etc.

I believe establishing contact with different regions of this country and connecting them to India will have a huge impact on our economic cooperation, educational linkages and tourism exchanges. I have seen this already in the regions I have visited so far and we are planning to expand this activity. This includes encouraging our businesspersons, media representatives and tourism agencies to join these visits. Our Embassy periodically invites government and business representatives from various Russian regions to make presentations to the Indian business community on prospects and opportunities for collaboration. We are happy to facilitate visits to India by government and business delegations from various regions.

You said there should be more tourist exchanges between our countries. In what ways do you think the tourism industry could get a boost? What issues should be tackled in order to increase tourist flow to Russia?

Our tourist exchanges have witnessed substantial growth in recent years, but we would like them to grow further. We welcome the increasing trend of Russian tourism to Goa. I would like to convey to my Russian friends that there are also a number of other places in India which they could visit: the beaches of Kerala, the hill stations in the Himalayas and a number of historical sites. About 250,000 Russian tourists visited India last year. There is no reason why the figure should not cross a million in the near future. Air India started its direct flights between Delhi and Moscow last month. Air connections from central and Far Eastern Russia still need to be improved. We are progressively making issue of Indian visas simpler and quicker; we are also working with authorities here for a similar arrangement for Indian tourists, so that we can have a significant increase in Indians visiting this country. Tourism is a form of people-to-people contract that has a beneficial impact on every other sector of the bilateral relationship.