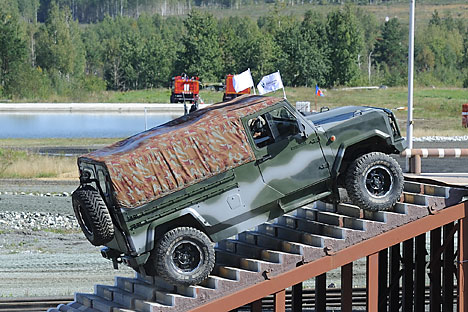 The Skorpion can be used for reconnaissance missions as well as for carrying out counter-terrorist operations.

The Skorpion-LTA, Russia’s newest armoured vehicle is designed “for conducting counter-terrorist operations and reconnaissance missions,” according to its manufacturer the Zashita corporation. The vehicle weighs all of 4 tonnes and is capable not only of transporting 5 persons and a tonne and a half of cargo in difficult terrain, deserts, and even mountains, but also of providing the carriage protection from small arms fire, shrapnel, and even from the blasts of improvised explosive devices having a mass of up to 4.4 pounds.

Rival for the Pink Panther

Light armoured vehicles with a hauling capacity of up to 1.5 tonnes have firmly taken their place in the arsenal of special operations forces in many countries around the world. Such vehicles are used not only for action at the enemy's rear but also for patrolling and the escort of columns. Thus, the legendary English 22nd SAS Regiment (British Special Forces) has already been using for many years the product manufactured by the Land Rover Company that is known by its informal name Pink Panther for these purposes, and their American colleagues from the JSOC (US Joint Special Operations Command) in the 1990s had already adopted the family of Pintsgauer automobiles produced by Steyr-Daimler. According website of the Zashita Corporation, the grade of protection provided by the armoured vehicle is assessed at 6a, i.e. the armour of the light tactical automobile withstands even B-32 armour-piercing bullets fired from an SVD sniper rifle.

At the same time, the highest classification of armoured protection of the Scorpion-LTA used in the West is class 4, capable of withstanding hits of 7.62 mm armour-piercing bullets. “Such a class of protection in combination with the high mobility of the Skorpion gives it an advantage over similar foreign automobiles, in particular over the currently popular VPS of the French firm Panhard, which although it is capable of withstanding the blasts of improvised explosive devices thanks to protection installed on the underside, its body has the minimum armoured protection,” Oleg Kovshar, a military expert and editor of the internet-project Military Frontier, told RIR.

The armoured protection allows the Skorpion to be used not only for reconnaissance missions but also for carrying out counter-terrorist operations. An anti-terrorist unit can enter into a building occupied by terrorists at a distance convenient for an assault under the protection of the automobile's armour. The Skorpion also has quite serious weapons. Depending on the task, it can be mounted with a 7.62mm Pecheneg  machine gun as well as an AGS-17 30mm automatic grenade launcher  and a high-calibre Kord heavy machine gun . If tactically necessary, weapons can be quickly removed from the Skorpion carriage and used in combat in their normal weapons mounts.

Skorpion in a swamp

The official demonstration of the Skorpion-LTA and its “brother” assault vehicle the Skorpion-LSHA B  to the leadership of the Russian Ministry of Defence was held on the testing grounds in Bronnitsy near Moscow. The armoured vehicles overcame various obstacles and even navigated the artificial pond, which garnered positive responses from top military officials.

“As usual, such an important event was not without problems. There were several days of heavy rains and the ground was very muddy; aggravating the situation was water pouring out of the artificial pool the automobiles navigated,” a Defence Ministry representative taking part in the testing of the newest armoured vehicle said. “Thus, the Skorpions were in a real swamp and passed the challenge set before them with honour. It is true that after having completed the demonstration, the LSHA B sat on its ‘bottom.’ During the evacuation of the vehicle its tire burst. But this did not prevent the vehicle from making it on ‘the rim,’ as they say, through the mud to its parking place.”

The Skorpion will enter into the service not only of special purposes divisions, but also into the recently formed Special Operations Command, the creation of which was announced late last year by the Chief of the General Staff Valeriy Gerasimov.

The Tigr armed vehicles are now found in the Uruguayan, Jordanian, and Chinese armies. After ending its cooperation with Russian companies, the UAE created its own version of an armoured vehicle based on the Tigr design and named it Nimr. Currently, the Arab Tiger (Nimr means tiger in Arabic) is supplied to several countries including Jordan and Algeria.

Currently the Russian Spetsnaz forces already use the UAZ 3132 Gusar, an armoured vehicle of a similar class. At the same time, the new Skorpion surpasses it in tactical capabilities. “The Russian Tigr armoured vehicles are being purchased in many countries around the world at the moment, but it is difficult to say yet what the export potential is for the lighter Skorpions before they have finished testing,” Oleg Kovshar said. “It is worth mentioning, however, that the Russian automobile surpasses its Western competitors in the class of protection without losing much in mobility.”