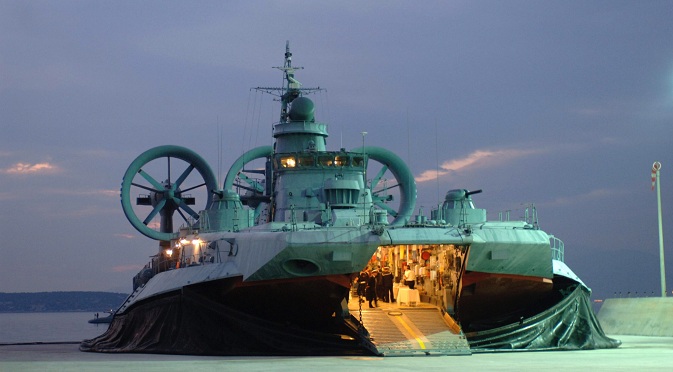 RIR presents a selection of Russian arms and ammunition with an unusual look.

The Zubr is practically invisible when it is in motion, and it seems that only a rising wave is rushing to the shore. But all at once, with a terrible din, the largest and fastest amphibious assault craft in the world heavily climbs ashore. It is only then that you can see its enormous four propellers in circular fairings at the stern and its ‘skirt’ creating the hovering cushion thanks to which the boat ‘soars’ above the water.

The Zubr rolling out onto a beach full of sunbathers, Kaliningrad. Source: YouTube

The Zubr can transport heavy technology and troops and land them onto a shore without any special installations. A real all-terrain vehicle, it can also move not only on water but also on land and on ice, overcoming impediments of up to a meter and a half high.

Besides Russia, the Zubr is also used by the Greek armed forces.

The first thing that comes to mind when you see the Palma is its incredible likeness to a human being: There is its head with eyes and a mouth, there are its arms. Its head is an optical electronic system of guided automata inside a sphere on the top; its mouth and eyes are video and infrared channels and a laser rangefinder. The arms can turn into rapid-firing cannons and guided antiaircraft missile systems.

The ‘little man’ stands guarding vessels and fires at incoming anti-ship missiles targeting the vessel if the latter does not have an antiaircraft missile system.

The Palmas can be found on the Gepard class frigates built for the Vietnamese navy, as well as on the Russian frigate Admiral Gorshkov, which will be launched this year.

The Predecessor to the fifth-generation airplane: the SU-47 Berkut

The Berkut has the appearance of an ordinary airplane - until you look at its wings, which appear to be attached at the wrong angle. However, it is the ‘anomalous’ backward sagittal wing that is the Berkut's principal advantage.

When taking off from an aircraft carrier's short runaway, the wings allow the plane to gain speed quickly and change to a horizontal flight without falling into the water. The craft is capable of maneuvering at low speeds and can even carry out a dynamic deceleration called the Pugachev Cobra, in which it flies tail-first while avoiding a tailspin.

The SU-47 can be called the progenitor of the fifth generation PAK FA plane. Since it was the only Russian plane with the dimensions of a destroyer but with an inner cargo compartment, in the course of the PAK FA program test flights it contained imitations of long-distance guided missiles.

Only one experimental prototype of the Berkut was ever built, and the craft did not make it into the force.

The surfaceeffect vehicle is a unique hybrid of a ship and a plane, and it is not really clear if it inherited more from the plane or the ship. As this craft takes off and land on water, and can fly at a speed of 311 mph only a few meters from the water's surface, the surfaceeffect vehicle is never threatened by sea mines or enemy torpedoes. It also goes unnoticed by enemy radars.

The USSR made two types of surface effect vehicles: the Orlyonok and the Lun. The latter was capable of carrying Moskit anti-ship missiles and was indeed a very menacing weapon, even even picking up the nickname of ‘the aircraft carrier killer’.

Only one prototype of the Lun was made and after the death of its constructor Rostislav Alexeyev its development was shelved.

The Orlyonok was smaller in size and was created to help the landing troops disembark. It could transport 200 troops and two tanks.

The USSR intended to produce 120 Orlyonoks, but due to the absence of funding the project was unfortunately frozen. With the collapse of the USSR the development and production of military surface effect vehicles was permanently cancelled.

Almost a convertiplane: the MI-12 helicopter

Unlike the American V-22 Osprey, the MI-12, the world's largest helicopter, does not have rotating propellers, yet it was also constructed according to a transverse scheme, which, in view of its complexity, is rarely used in helicopters.

However, it was impossible to construct a helicopter with major lifting capacity according to an ordinary scheme, since this giant was designed as a military machine capable of transporting cargo of up to 30 tons, such as ballistic missiles.

Besides the unusual location of its propellers, the MI-12's peculiarity consists in its wings: by the fuselage the wing is narrower. This type of construction increases the helicopter's maneuverability and its lifting force.

Despite its achievements and an excellent appraisal, the helicopter did not make it into the force. The military rejected the MI-12s, whereas civilian aviation had no need of large numbers of the craft.