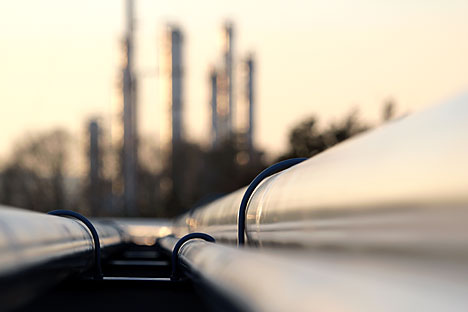 The downgrade assumes a drop in oil and gas production and lower oil prices. Analysts predict that the forecast may be further revised, either up or down, as early as this fall – depending on developments in Ukraine.

The Economic Development Ministry has made substantial revisions to its forecast for economic development parameters downward for 2015–2017.

Under the basic scenario, Russian GDP in 2015 will grow by 1 percent, instead of the earlier expected 2 percent, while inflation will reach 6.5 instead of 5.5 percent.

Furthermore, the ministry's analysts predict a fall in the export of oil, gas and petroleum products. While in 2013, oil and gas exports to countries outside the former Soviet Union stood at $323.4 billion and in 2014, at $ 313.56 billion, in 2015 they may fall to $292.5 billion. The ministry believes that oil prices will reach $90–95 per barrel and stabilize there.

"The forecast is indeed extremely pessimistic. It is hard to imagine a worse situation, of course, a global force majeure aside," says managing partner with AKG FinEkspertiza Agvan Mikaelyan.

Furthermore, he continues, the forecast proceeds from the economy's strong dependence on oil and gas and does not envisage any changes in the structure of the economy in the near future.

"If this is how it will be, then the level of pessimism is justified," Mikaelyan adds. In particular, he points out, the authors of the forecast do not expect any real growth in incomes. Furthermore, on key parameters, some analysts' estimates are even more conservative.

"For example, as far as oil price forecasts are concerned, if the Federal Reserve System starts raising interest rates next year, in 2016-17 Brent oil may fall to the price of four years ago, of about $80-95 per barrel," says Dmitry Bedenkov, head of research at Russ-Invest.

In the opinion of Finam analyst Anton Soroko, a forecast like this from the ministry was long overdue and has now been triggered by a drop in the oil price to this year's lowest level so far. Having said that, he continues, a decrease in the oil price by several dollars should not result in any serious changes to the budget.

"The budget for the next several years has been compiled on the basis of quite conservative oil price forecasts and so far there is no need to revise the budget parameters on that account," Soroko says.

"I cannot agree that there will be a sharp drop in retail sales because of a reduction in imports. I think substitutes will be found and even if there is a drop, it will not be significant," Agvan Mikaelyan is doubtful about the ministry's conclusions too.

"The U.S. Federal Reserve System (FRS) is undecided about the time frame for introducing a tougher monetary policy," he points out.

According to Bedenkov, a rise in the interest rates in the U.S. will invariably weaken commodity prices, which are an important economic growth factor in Russia.

"It should be borne in mind that the balance of power and sentiment can change. All it takes is the political will of the parties that can influence the events," says chief analyst with UFS IC Alexei Kozlov.

According to him, the main thing that could protect Russia against the negative impact of the world economic crisis "is to make Russia less dependent on raw materials, which can be achieved by creating a balanced and self-sufficient economy."

However, as Bedenkov points out, the main destabilizing factor for the economy is the situation in Ukraine.

"It is hard to predict possible further mutual sanctions imposed by Russia and the West, as it is difficult to predict what their relations will be like. This too can have a significant impact on the forecasts of the key parameters," he says.

For his part, the president of the Centre for Strategic Communications, Dmitry Abzalov, does not expect it that a deterioration in the economic situation will lead to cabinet resignations.

"Personnel decisions in Russia are traditionally taken closer to the end of the year and I doubt  that any government members, including the prime minister, may resign before then. Abzalov concludes that changes are more likely ahead of the parliamentary election set for 2016.