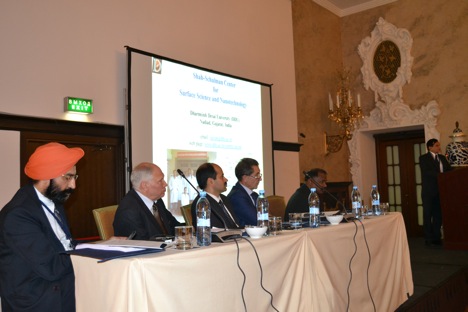 A delegation from Gujarat hosted a major roadshow at Moscow’s Hilton Leningradskaya Hotel to showcase the mega investment opportunities in the Indian state.

A high-level business delegation led by Girish Chandra Murmu, the Principal Secretary to the Gujarat Chief Minister, Anandiben Patel, is currently on a visit to Moscow to mobilize the support of Russian companies to participate on a larger scale in the biennial 7th Vibrant Gujarat Summit-2015 to be held on January 11-13 in Gandhinagar. With this purpose in view, the Gujarat delegation hosted a major roadshow at Moscow’s Hilton Leningradskaya Hotel to showcase the mega investment opportunities in the Indian state.

The 19-member business delegation at the roadshow projected the expanding prospects of the summit for Russian companies in Gujarat which since 2003 when the first summit was launched, has turned itself from an “investor’s summit” into a “global business hub.” The business delegation consisting of high-level representatives of Indian industry, trade and businesses, demonstrated the importance of the roadshow in Moscow, highlighting the upcoming large projects and big-ticket investment opportunities in Gujarat.

The Gujarat roadshow for Russia’s greater participation in the “Vibrant Gujarat Summit-2015” was held for the first time in the Russian capital, in the backdrop of Narendra Modi becoming Prime Minister, in May. It may be recalled that it was Modi who conceptualized and launched the biennial event in 2003 when he was Gujarat Chief Minister.

In fact, the Vibrant Gujarat Summit gave Modi a platform to showcase his development agenda on a larger scale. The 7th summit, next year, will also witness seven partner countries, including Australia, Canada, Britain, Japan, Netherlands, Singapore and South Africa. A number of representatives from different Russian companies were present at the roadshow.

He also focused on the high level of economic development of Gujarat during the tenures of Modi as Chief Minister, laying the solid ground for international investments in Gujarat.

Modi has so far visited Moscow twice since he first accompanied the-then Prime Minister Atal Bihari Vajpayee in November 2001, as a part of Indian delegation to sign an MoU for cooperation between Gujarat and the Russian region of Astrakhan. Later during the visit of Modi in July 2006, the two sides signed an agreement to extend the MoU up to 2011.

July 2006, during his six-day visit to Astrakhan and Moscow, Modi made a strong case for Russian investment in Gujarat, claiming a major breakthrough to launch cooperation with Russia’s oil and natural gas monopoly Gazprom. During his talks with Gazprom counterparts, the sides agreed to form a joint working group to develop cooperation, including business strategy, exploration strategy, human resources development and technical support. Gazprom and Gujarat State Petroleum Corporation has already signed an MoU for wide-ranging cooperation. Modi’s third visit to Moscow, in November 2009, to participate in the 4th International Energy Week and 9th Russian Oil and Gas Week conference was also very fruitful as he was able to convince the Russian oil and gas companies about reinforcing and enhancing the vibrant image of Gujarat as a petro capital of India and even at the global level.

It is worth- mentioning in this context that during his meeting with Russian President Vladimir Putin, in Fortaleza (Brazil), at the sidelines of the BRICS summit in July, Modi also fondly recalled his visit to Astrakhan region in his early days as Gujarat Chief Minister. Talking about that visit, he said, he felt as if he was in India.

Speaking at the roadshow, Nikolai Korolyov, Astrakhan’s Vice-Governor and Alexander Astarkov, Russian Chambers of Commerce, assured the delegation that Russian companies will participate in the summit, in a big way.