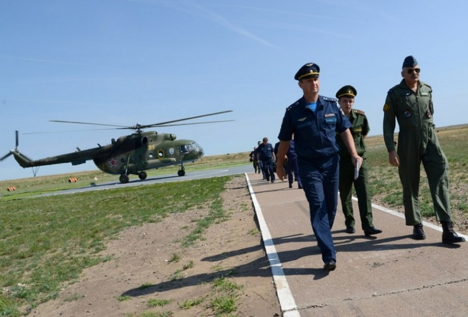 Avia Indra-2014 is being held in Voronezh at the Pogonovo range and in the Astrakhan Region at the Ashuluk training range. Source: Roman Demyanenko / RIA Voronezh

Over the course of the anti-terror drills, pilots from mixed crews communicated with each other in English, and using sign language.

The Pogonovo fighting ground near Voronezh hosted one of the main events of the Avia Indra 2014 Russian-Indian exercises on Tuesday, September 2. The joint Russian-Indian crew flew the Mi-35 and Mi-8, as well as the Su-30 CM. Helicopters brought down several thousands of litres of water to the firing ground, practicing fire-fighting, and the fighters hit the ground targets with missiles and bombs.

“The Indian Air Force is not involved in counter-terrorism operations. Their main task is to provide combat support to troops. Therefore, we have chosen operational and tactical aviation exercises at the fighting grounds and practicing of special Army Aviation missions,” said Colonel Alexander Maksimtsev, deputy chief of the Russian Air Force. “This involves interception of air targets, fire-fighting, search and rescue operations and support of ground forces. The Indian Air Force has a lot of experience in the highlands. We are interested to learn about the methods of their work.”

The second phase of the exercises will be held in India in November 2014. “Russia and India have historical Air Force connections,” Indian Air Force Commander Praveen Keshav Vora said. “We are using the Russian equipment from the sixties: MiG-21, MiG-23 and Su of various types. We have similar methods, because our technique is the same. We are carrying out these exercises for the first time and expect that they will serve as the basis for the development of our mutual cooperation. At first glance, this stage went very well, but we will discuss everything in detail when we get back to the base.”

Pilots from mixed crews communicated with each other in English, and using sign language.

“We use a similar technique. Only our spillway devices are Canadian. But there is almost no difference between them. However, the weather here is different, other nuances of piloting, new people,” IAF Commander Nikhil Purandari.

Russian pilots have said that the there is almost no language barrier among the crew members, because the aviators’ language is similar.

The Avia Indra-2014 exercises started on August 29. The first phase will last until September 5. From the Russian side, aviation pilots from the 4th training centre are involved and as well as pilots from the 334th centre for Army Aviation Combat Training.  In Voronezh, pilots are trained using the Lipetsk aviation centre technology.

“They have expressed great interest in our systems, they probably need to modernize their weapons arsenal,” Maj. Gen. Babakov, head of the Russian Air Force's anti-aircraft missile troops, said.