ALROSA to boost export of diamonds to India 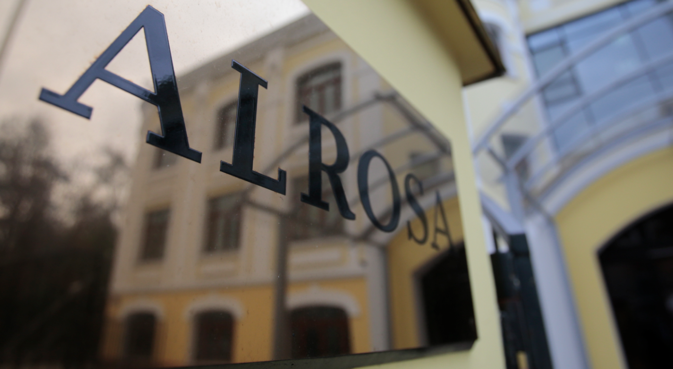 ALROSA's sales policy is based on long-term agreements, which account for over 65 percent of total sales volume. Source: Reuters

The leading Russian diamond miner is looking to work closely with Indian companies in the next few years.

ALROSA, the world’s largest diamond mining company, is looking to expand its presence in Asia, targeting both India and countries with a large Indian expat population. Recently Jitendra Kumar, the head of the Moscow office of Dubai’s Brilliant Diamond LLC proposed to hold a Yakut diamonds auction and the Week of Yakut diamonds in the Emirates.

Head of Customer Policy and Marketing at ALROSA, Vladlen Nogovitsyn told RIR that the company was considering the risks that could come with potential sanctions while formulating a strategy for the 2015 to 2017 contract period. The company has already started selecting its long-term customers and is expected to announce them at the end of the year. “Anticipating the possibility of sanctions on the import of Russian diamonds to the EU, ALROSA will give priority to customers whose companies structures have units that are registered in other jurisdictions, such as Israel, Dubai and China, this way in case of possible difficulties these customers can continue to purchase,” Nogovitsyn said.

ALROSA's sales policy is based on long-term agreements, which account for over 65 percent of total sales volume. At present the company has 41 long-term customers, including 9 Indian companies. “We expect that in the new contract period, this number will slightly grow, in part because of new customers from India,” the company's spokesman said, stressing that ALROSA is ready to cooperate with any company that meets the requirements and criteria for potential customers.

Incidentally, earlier this year ALROSA and the Indian Gem and Jewellery Export Promotion Council (GJEPC) signed a memorandum of understanding to exchange information, including statistical indicators of diamonds' export and import, reviews and development forecasts, market research data. This exchange will allow ALROSA and GJEPC get a deeper and more detailed understanding of the situation on the diamond market. “The cooperation touches upon a subject as sensitive as synthetic diamonds, the emergence of which causes concerns for some in the market,” Nogovitsyn said.

“GJEPC has an obligation to inform customers about the kind of diamonds they are buying. Selling synthetic diamonds without a corresponding notice misleads the customer and, as a matter of fact, undermines the reputation of the whole industry. Moreover, GJEPC stands for selling synthetic and natural diamonds separately and not mixing them within one batch. ALROSA shares this approach and our information exchange will cover this issue as well,” he added.

Last year, ALROSA sold nearly $4.7 billion worth of diamonds. The revenue in the first half of the year increased by 27 percent compared to the same period last year. Belgium accounts for nearly half of total exports. India is in the second place (about 15 percent), Israel is third (11 percent). The UAE received about 4 percent. “Overall since the beginning of the year we see gradually increasing demand for rough diamonds, so far the price growth amounted to about 7 percent, although the initially expected growth was of 3-4 percent,” Nogovitsyn said. He added that the demand for diamonds in the key trading centres is also rising.

However, the market analysts believe that to increase the sales of Yakut diamonds the company and Yakutia also have to work on the brand. “Rough diamonds from Yakutia are in demand because they are mined in a peaceful conflict-free region, and the origin of the diamond is clear and transparent,” Director of Territorial Promotion at AGT Communications Vladislav Shulaev said. “These are things that important buyers and producers of diamonds should appreciate. Still, for many buyers of small diamonds in Asia, especially in India and China, ALROSA is yet to establish a niche.”

According to him, it is important that the rebranded Yakut diamonds company targets a wide range of small diamond producers. He suggested that the offer by Jitendra Kumar could lead to a breakthrough. “An influential event such as the Diamond Week in the UAE will allow ALROSA to strengthen its position in Dubai and cooperate more effectively with the Indian buyers. Moreover, cooperation with all of the Middle East countries will be expanded,” Shulaev said. He adds that India and China are potentially huge markets for Yakutia.