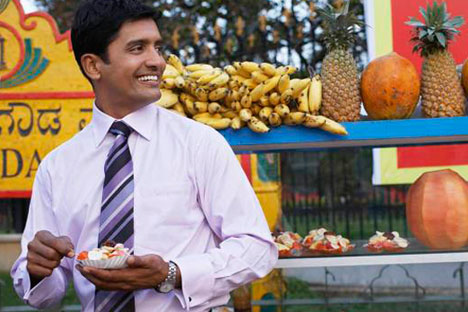 Some new varieties of fruits and vegetables, fish, seafood, packed food from India can be introduced In Russia and in case it suits the consumers’ taste it can become a generally imported item. Source: Photoshot / Vostock Photo

Food industry experts see certain opportunities for Indian companies in Russia, however, as the time factor is crucial, Indian exporters should take a more proactive approach in reaching out to new Russian partners.

The opportunity to increase bilateral trade between India and Russia as the result of the latter’s ban on food imports from U.S., Canada, Europe and Australia, have been making headlines over the last few weeks.

Russia’s Association of retailers (AKORT) estimates that the share of import in food commodities sold by retailers varies from 25 to 35 percent. That includes imports from both countries on whom the Russian Government imposed the ban (US, Canada, UN, Australia and Norway) and those that were not affected.

According to AKORT, Russia’s retailers will be able to replace the suppliers of most of imported products in all the categories affected by the ban. Considering that regulations require all importers to Russia be certified by Rosselkhoznadzor (Federal Service for Veterinary and Phytosanitary Surveillance), the re-orientation on new partners may take more time, some industry players admit.

“As far as I know our members are very keen on diversifying supplies of dairy products and components. There are some Latin American, Indian and Chinese factories-exporters in this segment that were not still approved by Russian government bodies, it’s very important to get a relevant approval for those foreign factories in order to substitute the imported volumes ,” Dmitry Leonov, Vice-chairman, Rusprodsoyuz (Russian Food Manufactures and Suppliers association) says.

Sergey Yushin, the Chairman of National meat association, says that at the moment none of the Indian companies are certified to supply beef to Russia. “Although India has become one of the largest exporters of buff meat in the world, the strict sanitary and phytosanitary requirements of customs union for exporters are not allowing such shipments from India,” Yushin says.

He emphasizes that Russian consumers are not willing to buy buff as they prefer traditional beef, even if it is more expensive. “Buff meat can partly be used in meat processing, but it is not yet clear how the end consumer will react. Thus, the prospects of Indian meat exports to Russia are not yet clear,” Yushin says.

Yushin notes that the ban on meat imports affected small volumes of exports of beef. “More than 90 percent of beef is being imported from countries that were not banned by Russia,” Yushin says adding that there is no question of deficit of beef and chicken in Russia as result of an import ban, however, the imports of pork were affected significantly as Canada was the major supplier of pork.

Moscow-based analytical company VVS believes that there is more potential for products that are already being exported from India to Russia. “It is, first of all, potatoes, onions, preserved vegetables, nuts, fruits, fish and some other items,” says a VVS analyst. “Considering that in last one and a half years, there have been no imports of meat and dairy products, it’s quite difficult to analyze the real potential for importing these items.”

On the contrary, Dmitry Leonov from Rusprodsoyuz believes that it is a right time and a good opportunity for new types of products that may have never been represented in Russia before to enter the market as some exotic commodities will be out of supply because of the sanctions.

“Some new varieties of fruits and vegetables, fish, seafood, packed food can be introduced and in case it suits the consumers’ taste it can become a generally imported item,” he says. “From this point of view India can offer many new commodities that may appeal to Russian consumers and get a share in the market. Well it is always a matter of taste. It’s really a good time to replace some products.”

Indian exporters have to deal with sanitary norm compliance as well as in competition from those countries that had been already trading with Russia successfully (for example, Brazil and Argentina).

Dmitry Leonov from Rusprodsoyuz told RIR that in order to help Russian companies import from India, the association is drafting a letter to agricultural ministry and Rosselkhoznadzor  requesting to open up those factories that were not satisfying Russia’s requirements, but made adequate efforts to comply with Russian standards.

“We will request to reconsider the ban and conduct additional inspections. It will allow our members to have more partners in India,” Leonov added. “Some of the members had even provided us with the list of such factories and we will solicit their opening as soon as possible so that Russian companies get some alternative offers from India.”

Rusprodsoyuz has recently signed an agreement with China Trade Chamber, with the help from Economy Ministry of Russia and Leonov believes that a similar deal can be reached with Indian industrial bodies.

“We could work with India following the same pattern as with China. We met, discussed the market rules, regulation, we exchanged customs codes for about 50 commodities, then we informed all our members about the commodities available, we are helping them with certification procedures too,” Leonov says.

Increasing visibility is a must

Experts interviewed for this article see exhibitions and trade shows as good option for Indian companies trying to find partners in Russia, although contacting Russian importers or their association directly is always a faster way. “Communication is no more a problem as most of our members have good command in English nowadays,” Leonov adds.

The Federation of Indian Export Organisation (FIEO) is organizing Made in India Show in Moscow on September 24-26, inviting nearly 130 companies from India. “The fair will highlight not only traditionally exported items but new products and companies whom we urged to participate once the sanctions from Russia against Western countries were announced,” FIEO president M. Rafeeque Ahmed told RIR.

According to the exhibition website, about 27 companies from India have registered as exhibitors. Most of them are rice, tea and spices exporters. The India Trade Promotion Organisation (ITPO) and Agricultural and Processed Food Products Export Development Authority (APEDA) is also participating.