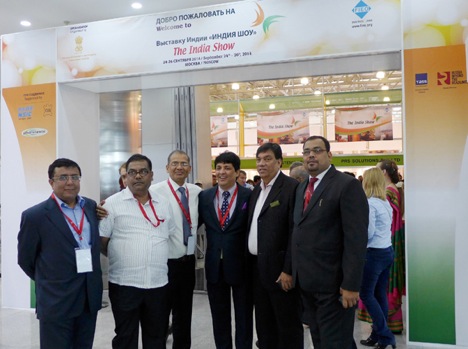 The India Show was inaugurated in Moscow on Wednesday. Source: Crocus Expo

India’s Commerce Secretary tells a news agency that huge opportunities exist for the country’s businesses in Russia, Belarus and Kazakhstan.

India is likely to soon to set up a joint study group to explore a possibility of negotiating a comprehensive free trade agreement (CEPA) with the Eurasian Union, India’s Commerce Secretary Rajeev Kher told PTI. The Eurasian Union, comprising of Russia, Belarus and Kazakhstan, will come into effect on January 1, 2015.

“We are at an advance stage to institutionalise a joint study group” for a CEPA with the union, Kher told the news agency after inaugurating the India Show in Moscow.  He added that huge business opportunities existed in this region for Indian companies.

“We have critically evaluated our engagement with our trading partners and we have recognised that huge potential exists in regions including Latin America, Africa and CIS,” Kher was quoted by PTI as saying. “This region has been relatively left unattended by a large number of sectors.”

Federation of Indian Export Organisations (FIEO) President Rafeeq Ahmed told the news agency that bilateral trade between Russia and India in 2013 stood at $9.8 billion. In 2012, it was around $12 billion. The countries have set a $20 billion target.

At the 14th annual Russian-Indian summit held in Moscow in October 2013, it was decided to set up a Russian-Indian working group that examined the possibility of an agreement on economic cooperation between India and the union.

Russia has been eager to speed up negotiations on a CEPA with India, while Kazakhstan, wary of competition from India has expressed apprehensions. Russian analysts have argued that strong competition from India can only be expected in the textile and mining industries, pharmaceuticals and information technology. Any CEPA will involve hard negotiations when it comes to quotas on goods and services.  While negotiating such agreements with other countries and groupings, India has made it clear that any agreement on free movement of goods will be tied to a similar free movement of services.

The India Show will be held in Moscow till Friday, September 26. More than a 100 exporters from diverse sectors are displaying their products at the trade exhibition. The Russia & India Report is a media partner of the show, being held at the Crocus Expo exhibition centre.