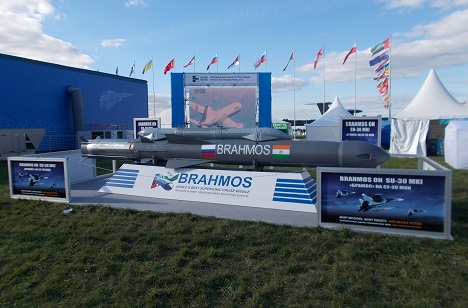 Despite its high promise, India and Russia have to navigate through various complexities in making the BrahMos missile a profitable business.

With the visit of Vietnamese Prime Minister to India in the last week of October, the issue of BrahMos missile export has surfaced again. Built under joint cooperation of India and Russia, the supersonic cruise missile has become quite popular in third countries. Due its cost effectiveness and deterrence capacity, the missile has been much sought after by countries as far as Latin America and as close as South East Asia.

Last month the head of BrahMos Corporation, Sudhir Mishra, stated that “If any country approaches us we will look into it on a case by case basis. BrahMos Aerospace has the production capacity, game plan and skilled labour to supply. I would like to state that we are ready and waiting.” Mishra also indicated that there is already a list of friendly countries to which the missile can be exported and stated that “It (the export) can happen anytime soon as the new government has made its intent to export weapons clear.” But he made it clear that it is up to the governments of India (along with Russia) to decide when to market the missile in third countries. India’s eagerness to export homemade items has been more pronounced after the new government came to power in Delhi in May. Prime Minister, Narendra Modi has given the call to Indian entrepreneurs ‘make in India’ and also pitched for export of defence items to friendly countries.

The BrahMos missile is one of the testimonies of burgeoning partnership between India and Russia. Started in 2004, BrahMos (combination of Brahmaputra and Moskva) is one the unique cases of joint defence design and production between the two countries. Hence, the decision to export the missile has to be by the leaderships of both the countries. A report suggests that till the last year Russia was hesitant to export the missile to third countries, but currently Russia has expressed interest in its export. Countries like Vietnam, Indonesia, South Africa, Egypt, Oman, and Brunei, Venezuela have expressed interested in the missile. Three submarine manufacturers – Amur of Russia, Howaldtswerke-Deutsche Werft (HDW) of Germany and Navantia of Spain –  have contacted the BrahMos Corporation for installing BrahMos on the new Project- 75I submarines should they bag the contract. Similarly, Malaysia had expressed interest to install BrahMos on Su-30MKM fighters that it received from Russia in 2009. In a sense, BrahMos has become star defense equipment among many developing countries to protect their maritime border or to project their maritime power in an insecure region.

Vietnam has since long expressed keen interest in the missile. Vietnamese Prime Minister during the recent visit pitched for the export of the missile to his country.  Reportedly while the UPA government was hesitant to export the missile to Vietnam, the new government is positively inclined to export it to the South East Asian country. Prime Minister Modi during his meeting with his Vietnamese counterpart, Nguyen Tan Dung, emphasized that “Our defence cooperation with Vietnam is among our most important ones. India remains committed to the modernization of Vietnam's defence and security forces.” There are plans of an Indian launch of Vietnamese satellites and Indian investment in oil fields in dispute South China Sea waters. There are also talks about India building a nuclear power plant in Vietnam.

Despite the flurry of demands and expression of intents, the missile has not actually been delivered to any third country. In the case of Vietnam, China has expressed its reservations against India’s policies to supply weapons. In the South China Sea, China and Vietnam are locked in a conflict over the maritime boundaries. India and China have boundary differences too.

Russia, which enjoys good relationship with India and China, may not be interested in offsetting the prevalent balance of relations by exporting the missile to the countries not friendly to China. In that case, Russia will have a difficult role to craft equilibrium in its relations with India and China, while simultaneously facilitating the export of the missile that can be economically profitable to it and India. Russia has good economic relations with China, and this year both the countries signed a deal worth $200 billion, dubbed ‘deal of the century’. China (and also India) has supported Russia’s position on the Ukrainian conflict. Hence, Russia which has no dispute with China may not be interested in hurting its ally’s interests in the South China Sea. At the same time, it may not be interested to forego the profit from selling the defence items including the BrahMos missile. Russia is a major defence equipments suppliers and it has interested customers in South East Asia. It has already supplied a Kilo-class submarine to Vietnam and Sukhoi fighters to Malaysia.

India, Russia and China, however, have larger common interests. They have used common platforms like RIC, BRICS and G20 to promote those interests. Selling the BrahMos missile, particularly to the countries with which China has geostrategic differences will, hence, be a complicated affair.

India is not a member of Missile Technology Control Regime (MTCR), the voluntary group that prevents the proliferation of missile and unmanned aerial vehicle technology. This is another obstacle particularly on part of India in exporting the missile to Vietnam or any other country. A line of suggestion is India can finalize the details of export agreements with friendly countries while simultaneously formalizing membership of MTCR. Despite its high promise, India and Russia have to navigate through various complexities in making the BrahMos missile a profitable business.