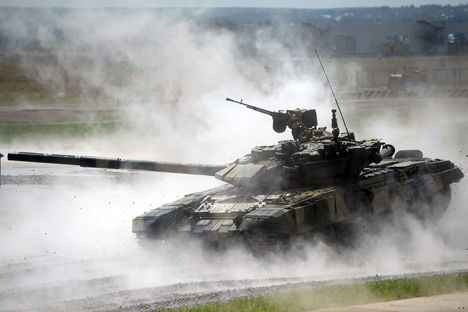 Frustrated with Europe's decision to impose sanctions on Moscow, the Russian government no longer views military and technology cooperation with European countries as particularly appealing. The Russian defence sector is now trying to resolve its problems independently, but implementing the necessary changes will take time.

The decision to purchase Mistral helicopter carriers from France was "a mistake of the previous leadership of the Defence Ministry,” Russian Deputy Prime Minister Dmitry Rogozin, who oversees the country's defence industry, said on Dec. 4, after Paris apparently bowed to Western pressure and canceled the delivery of two Mistral warships to Moscow.

The failure of France to honor a deal that had been finalized long ago was merely the most high-profile set back among a number of blows dealt to the Russian defence industry since the summer, as sanctions and growing tensions between the West and Russia over Moscow’s alleged role in the conflict in eastern Ukraine.

In late July, when the EU had just introduced its embargo on the import and export of weapons and dual-purpose goods and technologies to Russia, RIR looked at all the industries and projects that could be affected by that move.

With the end of the year approaching, now seems to be a good time to assess the outcome of these: What are the costs of the sanctions to the Russian defence industry, and what compromises is Russia likely to have to make in the long run?

In September, the Russian Defence Ministry said that "it was not worried by the sanctions," adding however that the sanctions might affect third-party countries that purchase Russian military hardware and equipment manufactured with the use of foreign components.

At the same time, President Putin said that "the industry should be ready to manufacture critically important equipment, components and materials and have the relevant industrial capacities, technology, designs and technical basis.”

According to the Russian stare arms exporter, Rosoboronexport, Russia's purchases of weapons from the West accounted for no more than 1 percent and their cancelation will in no way affect Russia's defence capability.

Sanctions, just like any law, cannot apply retrospectively. Yet this is exactly what happened with the Mistral deal. Should we expect similar actions in relation to contracts with third-party countries? So far there have been no reports of problems in that area.

If problems do arise, they may affect the contract for the supply of French Thales Catherine-FC and Sagem Matiz thermal imagers, which are used to make targeting equipment for Russian armored vehicles. Under already-signed contracts, Thales is expected to supply 331 Catherine-FC imagers to Russia, 130 of which are intended for Russian vehicles and 201 of which are to be installed on hardware to be supplied to foreign customers.

These cameras are mainly installed on the export version of the Russian T-90S tank, which is sold to Algeria and India. Will this contract be fulfilled and what will happen next? The same applies to electronic equipment for the export versions of the Su-30MK and MiG-29K aircraft.

Russia completely relies on imports when it comes to gas turbine units for its frigates, corvettes and other warships. It is now establishing the production of its own gas turbine units at the Saturn research and production association, and of gears at the Zvezda plant.

Problems may arise with electronic equipment, as Russia is only just starting to revive the relevant production inside the country. However, there may also be a replacement of suppliers, all the more so since Western partners have never provided Russia with military- and space-class electronics anyway. Possible difficulties with third-party countries may be resolved through European companies cooperating with those countries directly to supply the missing components to Russian-made hardware.

Deputy Industry and Trade Minister Sergei Tsyb has listed Russian sectors that offer the most potential in terms of import substitution: In the machine tool industry, imports reach 90 percent; in heavy machine engineering, from 60 to 80 percent; in the electronics industry, from 80 to 90 percent.

By the estimation of the Russian Industry and Trade Ministry, if the import substitution policy is successfully implemented, Russia's reliance on Western suppliers for the most "critical" industries can be expected to decline from 70–90 to 50–60 percent by 2020. Complete import substitution is impossible, so in addition to setting up equivalent domestic production, Russia will have to look for new suppliers.

Why Russian arms sales are on high octane

Military cooperation with the West was on the wane even before the conflict in Ukraine began. From 2012 onward, the Russian Defence Ministry did not sign any new large contracts for European military products.

Furthermore, in August 2013, a regulation was passed banning the use of foreign machine tools if their Russian equivalents were available; the aim of this move was to revive the destroyed Soviet machine tool industry and to raise the share of Russian-made equipment to one third of the industry's requirement. Efforts were made to gradually end the practice of repairing Russian ships at foreign shipyards.

The import substitution program submitted by the Russian Industry and Trade Ministry on July 25, 2014 envisages the use of domestic equivalents to first replace Ukrainian goods and then goods from countries that imposed sanctions against Russia. It is also proposed to expand cooperation with the other Customs Union countries: Belarus and Kazakhstan.

In addition, Russia could further expand its cooperation with China. Beijing could become a key supplier of electronic components to Russia, says Vladimir Shvarev, deputy head of the Global Arms Trade Analysis Center, adding that relevant talks are already under way.

According to Russian Industry and Trade Minister Denis Manturov, the import substitution program will allow Russian manufacturers to create over 30 billion rubles' ($600 million) worth of additional production annually, starting from 2015.