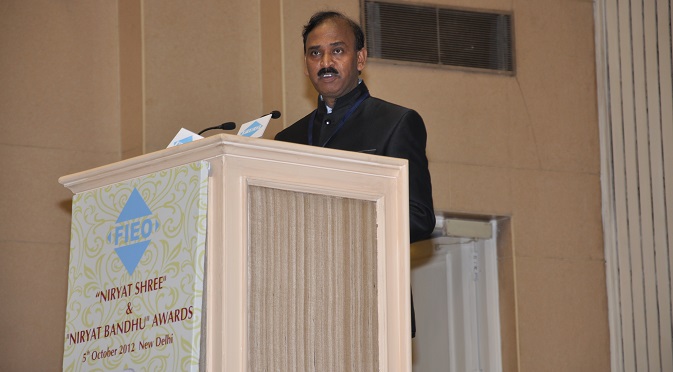 Ajay Sahai, Director General and CEO of the Federation of Indian Export Organizations (FIEO) talks to RIR about the possibility of trade with Russia in rupees and steps to increase trade volume between two countries.

You have suggested earlier to start trading with Russia in rupees. Tellmore about this idea.

Most of India's export to Russia is happening in dollar but we have certain component which takes place in rouble. The sharp volatility in rouble which has been witnessed in last month has impacted any export to Russia, particularly in rouble, but in dollar also. Ultimately the importer in Russia will have to pay a large amount of rouble to get that much of dollar. It also may affect either any export to Russia and in many of the communities where import was happening because the Russian domestic producer may not be competitive. They have assumed competency because of the increase in the import, landed import price because of the depreciation of rouble.

Looking to all these possibilities and looking into the fact that India has an adverse trade balance with Russia, our present export to Russia is around $2.2 billion and import is close to $4 billion. What we are suggesting that if Russia agrees to convert this payment of close to $4 billion into Indian rupees, we can keep that amount in India and when an exporter makes an export to Russia, he can always invoice in Indian rupee and he gets that much rupee from this account. So the advantage is that Indian exporter is insulated against the currency risk. They invoice let us say Rs 10, they get Rs 10. We convert that Rs 10 into dollar for adjustment purposes and at the end of financial year if there is any surplus lying into that account, that can be reworked into dollar and remitted to Russia. That is the idea which we are floating.

Have you already approached the government with this?

Hopefully by next week or so.

How much time it can take to make this idea a reality?

It will not be big issue for India. The call has to be taken by Russia because at the moment, Russia is getting at least this $4 billion in hard currency. Tomorrow if they keep this amount, they are deprived of that much of dollar. So a call of course a proposal may be mooted by India but final call may have to be taken by Russia. So that is something which has to be discussed and deliberated with Russian counterparts.

So how much time India needs?

I do not feel that we will take much time into it because we have similar mechanism in place of course for different reason with Iran. So this mechanism is time-tested so far India is concerned.

Do you suggest to copy this mechanism with Iran in trade with Russia?

With Russia circumstances are different. Iran has no choice. Russia still have a choice to get the payment in dollar. So the two situations are little different.

So could you tell the exact time you need?

I personally feel that if they have to take a call, they will take a call within a month's time.

Which exporters want to trade in rupee? Any concrete areas?

All of them, because Russia is short of dollar. The oil prices have crashed and 40% of Russian export has been oil only. So if oil prices crash by around 100%, you can very well see the position of Russia. Secondly, Russia is now having a contracting economy. So there is a lot of pressure and we feel that Russia may find it difficult to manage that much of dollar. They have a healthy reserve of $400 billion but unless they know that the crisis or the problem will continue up to this period, they would not like to use that resources to stabilise the currency. So that is their problem. So from that perspective, I personally feel that they should be able to take a call.

India is a reliable and time-tested partner - Vladimir Putin

You also said around three months back, that after the sanctions you had been preparing the list of 20 items to export to Russia? Is there any progress on that?

Secondly, we are looking into opportunity in machinery, boilers and nuclear reactors also, not big reactors but parts of that for supply to Russia for which major demand exists.

Thirdly, we are looking at the possibility of increasing our apparel export to Russia. Number of exporters participated in India Show which we organised in September in Moscow and they have received good response.

There is a lot of demand for many of the agriculture commodities also, particularly for spices.

You mentioned Indian export to Russia at around $2.2 billion. Are there any factors for the dramatic increase of this in future?

That is true because the advantage of sanction is that it has opened a window of opportunity particularly in the sectors where you were not getting any market access in Russia. Agriculture is pointed to that. There are number of other products also which were hitherto being supplied and auto component will be one of them because most of the auto components were earlier being supplied by European Union to Russia.

How much can the export increase?

There are number of factors will determine but if the sanctions continue on Russia and we are able to work out a rupee payment mechanism, which Russia agrees, in next three years' time, we can take this 2.2 billion to 4 billion.

Can you suggest some more potential articles of Indian export to Russia?

Do you see any possibility to start business with Crimea which as was mentioned earlier, is open for Indian companies?

When Crimea is becoming part of Russia, we have no problem but it is for the individual exporter investor to look at the potential of that particular region to venture into that. So they may be little cautious but a beginning will be made by leading Indian consultants who can provide the project consultancy in the region because they are the best source of information which can guide Indian companies to look at the trade and investment opportunity. So I see the trend starting with services followed by goods and the investment policy of flowing into the region.

Shall the rupee-rouble exchange rate be connected to each other directly like in Soviet times or through the dollar?

No, right now, the system which works is that rupee is, let us say I have to remit to Russia, my rupee is first converted into dollar and dollar is converted into rouble. The only problem in such a mechanism is that there are double exchange rate which the exporter or importer has to pay first for conversion from rupee to dollar and then from dollar to rouble.

Looking into volatility of rouble at the moment, I do not foresee any linkage between rupee and rouble because so much fluctuations happening that may not happen at the moment but if rouble is stabilised, definitely I am sure the central bank may take a call. In fact, earlier also two years back, there was a proposal to start trading in local currency. That proposal was there but I am not sure in the given circumstances and at the moment, there can be any initiative in that regard.