Want to succeed in doing business in Russia? Don’t back Russians into a corner 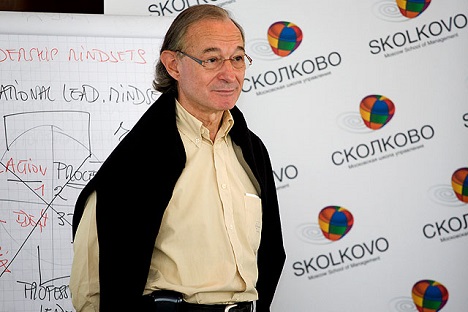 Pierre Casse, professor of leadership at the Moscow School of Management Skolkovo, spoke with RIR about why was it a mistake to leave Putin sitting alone at the G20 summit in Brisbane and reveals the key word to success in Russian business.

How would you explain the communication deadlock between the West and Russia, not only in politics, but also in business?

When I try to explain to my colleagues in other countries why Russia is reacting in its way in Ukraine, for example, they just don't believe this “why.” I'm trying to explain that if you push Russian people into a corner, they will get together and fight back, even if they don't like what is going on, even if the big boss is not liked by everybody, everyone will back up the leader.

PHOTO OF THE DAY: Dmitry Medvedev at the Skolkovo School of Management

What should you do to get Russians to work with you?

Let me tell you what you don't do. What you don't do is what they did over there at the G20 meeting in Australia, which was to let Mr. Putin sit alone at the table. And it was on the TV networks all around the world. It's stupid, because then Putin decided to leave and all Russians everywhere – in Russia and around Russia – said “those people outside, look at the way they are treating us. Not just Putin, but us.” I was interviewed by a TV network a couple of months ago. They asked me about Putin. I said, he is doing the right thing, but in a wrong way.

Russia is like France. Russians are unmanageable. That is why there was a close historical connection between the two, I guess. They need someone in a crisis situation, just like now, to take care and give directions. You need somebody to open the system slowly and carefully, that you create the middle class... It takes time.

Is the vertical distribution of political power in Russia reflected in business?

It's required right now. But what I say to my students here in Skolkovo, it's the way now, but you should start preparing for the next step. And the next step is not top-down leadership in the public and private sector, but more delegated management. And you don't have a choice. These young people –you will empower them or they will leave.

Russia has all the potential. I started to teach here at Skolkovo 10 years ago. And to be very blunt, I would say the following: most of the participants at the seminars were CEOs with their bodyguards in the corner with machine guns. And at the end of my first seminar they would come to me and say: “I like what you do. Can you come to my company to do the same thing?” This was 10 years ago. Ten years ago people wanted to be rich by stealing. Today Russian people want to be rich by working. That’s a big difference in just 10 years.

How do Russians differ from others in doing business?

My experience shows that Russians are very people oriented and very emotional. If at a seminar here in Skolkovo you don't manage in the first 30 minutes to establish a good emotional connection with the audience, you will send them out for a break and you won’t see them come back.

And they love to play with ideas, like the French.

If you go to Russia to do business or to teach, business here is basically around people and the keyword is trust. You need to establish a trustworthy relation first and then this trust will lead to: “you talk, I talk, we talk, we brainstorm and we feel good about each other.” And when you have that, then you have the foundation. Now you can move to “what we can do together” and “how we are going to do it together.”