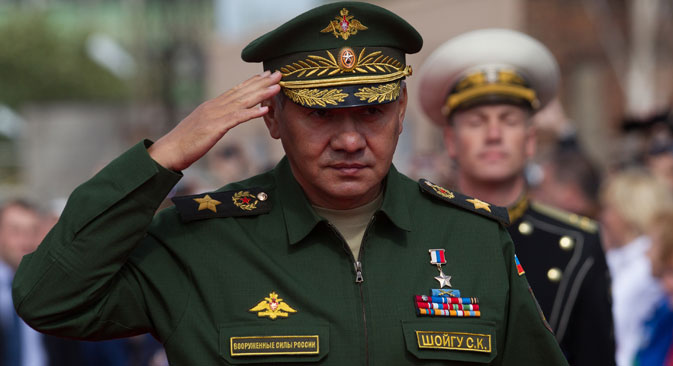 Russian-Indian relations for many decades have had a strategic partnership nature, being based on a solid foundation of mutual trust, mutual understanding, and closeness between the two nations, Sergey Shoigu stated.

Russia and India are ready to increase their cooperation on fighting terrorism, Defense Minister Sergey Shoigu announced on Wednesday during talks with his Indian counterpart Manohar Parrikar.

“Our countries strongly condemn all acts of terror and oppose the policy of double standards in the fight against this evil,” he underlined.

The Head of the Russian Defence Ministry praised the current state of military-technical cooperation between the two countries, noting that Russia and India have reached a level of tight industrial cooperation.

“In the long term – there will be the creation of a multipurpose transport aircraft, a fifth generation fighter, and a number of projects in the naval field,” said Mr. Shoigu.

According to him, Russian-Indian relations for many decades have had a strategic partnership nature, being based on a solid foundation of mutual trust, mutual understanding, and closeness between the two nations.

“This was yet again confirmed by the results achieved in the December visit to India by Russian President Vladimir Putin and his talks with Indian Prime Minister Mr. Narendra Modi,” said Mr. Shoigu.

He recalled that during the summit, the two leaders adopted a plan to strengthen Russian-Indian cooperation over the next decade, which, in particular, provides for broad military and military-technical cooperation.

“The agreements that were reached at the highest level, open up additional opportunities for cooperation between the defense ministries of Russia and India,” underlined Mr. Shoigu.

He expressed hope that the policy of strengthening multilateral relations between government agencies of Russia and India will remain unchanged. “We are ready to intensify our cooperation,” assured the Russian Defencdefe Minister.