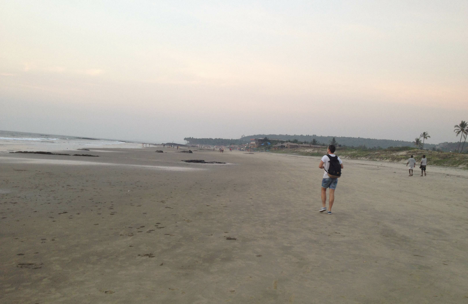 Before crisis thousands of Russians came to Goa to avoid severe Russian winter, or to settle here for a long time. Source: Alexandra Guzeva

RIR reporter spent her holiday in Goa late December and was surprised to see very few of her compatriots in this picturesque sun-kissed resort that had become a second home for many Russians.

Just before the New Year, Russian airlines announced a 12% price hike for all flights. Besides, the hasty devaluation of ruble against the dollar was clearly showing that it was time to start saving, and that in 2015 many won't be able to afford to travel abroad.

I decided to grab the chance to enjoy warm Indian sun, which I might not have been able to see for a long time. Together with some friends, we bought the cheapest tickets to Goa and headed towards Shiva.

Russia's looming economic crisis manifested itself as soon as we got on the charter flight Moscow-Dabolim: the plane was half-empty, so that the passengers could sit wherever they liked and occupy three seats at once when taking a nap.

Our hotel in Calangute was just 20-minute walk away from the beach. It caught my eye immediately that there were very few Russians in the hotel. Usually Russian travel agencies send tourists to hotels that have been their partners for years, so such hotels are normally packed with Russians. Take, for instance, Turkey, Crete, or Thailand, where one feels as though one has never left Russia. While in our hotel there were mostly Indians, who were staring at our pale faces.

On Calangute public beach, we turned out to be the only Russians. Only locals were enjoying their weekend, taking a swim in the Arabian Sea in big groups. During weekdays, the beach was mostly empty.

We packed up the most essential belongings, and headed to the north of Goa to discover the serenity, the Indian way. Renting a new bungalow on the beach every day, we travelled to all the beaches in the north of the state.

But as much as we were seeking harmony and tranquility, we were not ready to see the deserted beaches that awaited us.

As we were rambling along the beach, enjoying the tide and the sundown, sometimes we happened to meet just 3-4 other persons, sauntering like us in the opposite direction.

I felt like crying at times on discovering  that we were virtually the only customers at the beach cafe in Mandrem! Just a couple of Britons stopped for a beer and left. And that was it ...

The place's owner, chef and waiter were sitting in the shade and looking at us sadly, ready to satisfy any whim.

Why so few people?, we asked the owner.

There's crisis in Russia and all Goa is empty this year, he replied matter-of-factly.

Indian girls, who sell bracelets, scarves or paint mehndi on the beach, were sadly ready to sell their wares at any price. Having toured around Vagator twice, we discovered the donut seller sold only two donuts. And it was two of us!

Luckily, we found a  place to sleep easily - almost any beach cafe had a few huts available. Many owners were ready to offer them at throwaway prices, and one could luxuriate in accommodation with a variety of extra services from renting a motorbike to things less legal.

Taxi drivers were as much sad and often agreed to take us nearly for free. Last year Goa was full, and now the contrast was shocking. We know there's crisis in Russia, and not much money, so nobody is coming, and we have no work because of this, one of them said.

Once, we made it late returning from an unknown beach and while making our way to the main road we met a Russian guy on a motorbike, who has been living for long in Goa. He offered us a ride to the nearest taxi stand. This is my way of cleaning my karma - doing good deeds for people. I don't spare anything, and eventually all the good comes back to me in full, he told us philosophically. He added that local Indians do not like settled foreigners, preferring the newly arrived tourists.

According to him, before thousands and thousands of Russians came to Goa to avoid severe Russian winter, or to settle here for a long time. The income from leasing flats in Moscow and freelancing was enough to live comfortably in this Indian paradise. But as the crisis hit, it all unravelled like a house of cards: Now with the fall in the rouble, the rent from the same one-room flat in Moscow works out to Rs 20,000 instead of Rs 40,000. Meanwhile, the vague prospects and lingering uncertainty drive Russians to stay put at home and store up all that hard-earned money.