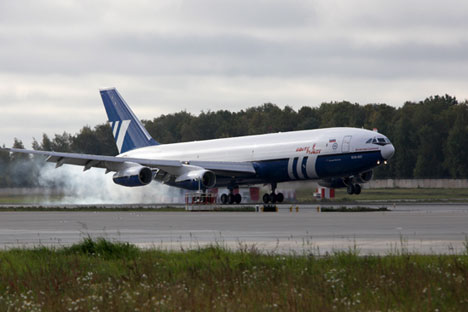 The Russian Defence Ministry has ordered the construction of tanker aircraft IL-96-400TZ. The upgraded version of cargo aircraft IL-96, which was used for presidential visits abroad, would be able to refuel strategic aircraft in the air at ranges of up to 3, 500 km.

Russia has developed a new version of tanker aircraft, which is capable of transporting more than 65 tonnes of fuel for 13,000 km. Its core tasks will include refueling the interceptors and long-distance strategic bombers, including those carrying nuclear weapons. The order from the Ministry of Defence to the United Aircraft Corporation came in 2014. The first two aircraft should be delivered in early 2015. The new tanker aircraft will be able to carry twice as much fuel, and for 2,000 km further than their predecessors IL-76.

Aircraft for missile-carriers and President

The tanker aircraft is another attempt to save the Soviet-designed cargo plane IL-96 since the promotion of its upgraded versions for commercial flights has failed. The plane became a casualty of the collapse of the USSR. In the 1990s, the aircraft construction in Russia was not financed, and in the 2000s the Soviet model could not compete with the Boeing and Airbus which had two economical engines, against the four-engined IL-96. Russian airlines did not purchase the domestic model. The support came from the government of Russia that began purchasing the aircraft for the president of the Russian Federation, who must fly on a Russian-made aircraft for safety reasons, as well as for the officials. In 2013, the Russian Ministry of Defence joined the government in making orders.

In early 2014 the Department of Presidential Affairs announced an order for other two IL-96-300 from Voronezh Aircraft Plant. The aircraft are expected to be delivered to the customer before the end of 2015. However, the Ministry of Industry and Trade closed the mass production of IL-96-300 in 2009, as it found the project unpromising due of the aircraft's high production costs and high fuel consumption despite the assessment of the pilots that the aircraft was safe and secure.

Even in the difficult 1990s the works on heavy IL never came to a full stop. In addition to the modernisation of IL-96, the study of IL-106 project was under way, military expert Oleg Zheltonozhko told RIR. According to the expert, the development of civil and military variations of IL was going at an extremely sluggish pace due to the stake placed on Ukrainian Antonov, which was being used for Russian air assault troops and the transportation of armoured vehicles. However, in the summer of 2013, in the openly published results of defence tenders the observers came across the data on government contracts on the development of technical project of heavy long-range military transport aircraft (BTA) and the layout of the cockpit, which would have been concluded between the JSC IL and Russia’s Ministry of Defence, based on the results of a closed competition, said Zheltonozhko.

In October 2014, attempts were made to revive the commercial version of IL-96. Voronezh Aircraft Company completed the conversion of cargo aircraft IL-96-400T into passenger version, dubbed IL-96-400VPU. The delivery of the aircraft to the customer, one of the Russian government bodies, was scheduled for the end of December last year. The cost of the basic model is estimated at 2 billion rubles.

In 2009 Ilyushin Finance Co supplied the air company Polet with three cargo aircrafts IL-96-400T, which were successfully used to haul various commercial goods for nearly five years. In May 2013 the need for extra large-scale traffic on such expensive domestic aircraft declined. Polet suspended the operation of all three aircraft and returned them to the manufacturer. Most likely, these were the planes that were upgraded to become air tankers. However, according to the company, the construction of new aircraft will continue, largely due to government contracts. The plans provide for the construction and delivery of 14 IL-96-family aircrafts before 2024.