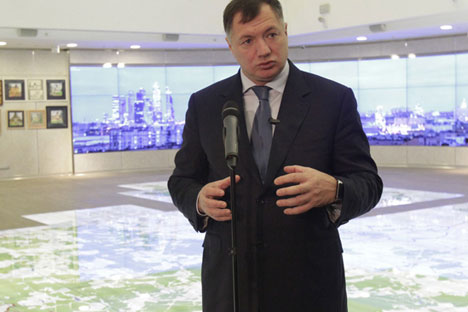 Marat Khusnullin: "We have reviewed the programs for the city's development and the basic scenario for Moscow's development is based on inflation of 10 percent a year". Source: Moskva agency

The ruble’s loss of 50 percent against the dollar and euro since November 2014 has obligated the Moscow government to review a number of its development plans in 2015. Moscow Deputy Mayor Marat Khusnullin sat down with RIR to talk about the Russian capital’s strategies for dealing with an increase in costs and the departure of foreign investors.

How has Standard & Poor's downgrading of Russia's investment rating and the exit of foreign investors affected the city's development?

The rating downgrade has not had a direct effect on the general volume of investment in Moscow. But in [the rest of] Russia, however, there will be a certain effect. Nine million square meters of real estate were built in Moscow in 2014 and permission was given to build another 40 million. A hundred kilometers of roads were also constructed.

However, it’s possible that in the near future these indicators will decline. We do not expect a crash in 2015, but it’s likely that the volume of real estate constructed may be reduced to 8 million square meters. Many things depend on bank financing: If credit to buy real estate is available, then people will continue taking out loans.

Does the Moscow mayor's office have any plans, due to the fall of the ruble, to make cuts in the budget? And what effect does the devaluation of the national currency have on Moscow's preparation for the World Cup in 2018?

Cuts will depend on the future inflation level. If inflation reaches 10 percent, the distribution of resources will obviously be different than if inflation goes up to 15 percent.

We have reviewed the programs for the city's development and the basic scenario for Moscow's development is based on inflation of 10 percent a year. With this in mind we have decided not to embark on certain building projects, and inflation has meant we have had to speed up [the construction of] some infrastructure projects.

For example, the reconstruction of the Luzhniki soccer stadium, which is supposed to host the opening ceremony of the 2018 World Cup, was to be finished by 2017, but we have decided to finish it in 2016. If inflation is 15 percent, then for us an extra year of work will cost almost one billion rubles ($14 million). Due to inflation, we have also decided to reduce the timescale for the construction of the metro: If someone wishes to realize a three-year project in two years, we will happily find additional financing.

In terms of figures, how has the devaluation of the ruble increased the cost of Moscow's largest projects, including those that will be used for the 2018 World Cup?

By the time of the World Cup one of the 10 biggest soccer stadiums in the world, Moscow's Luzhniki, will have been fully reconstructed. We already see today that the cost of the project has increased by 5-10 percent. However, this is not the final indicator.

The project includes the active use of imported material, for example, polycarbonate covers, while on the roof there will be a media screen that will broadcast the ceremony.

Due to the large quantity of imported material we depend greatly on the ruble exchange rate, and it is still difficult to make an accurate forecast of the project's price increase. I can say that we are changing certain suppliers.

Traditionally, we've had European suppliers, but now we are looking for others to replace them, including Russian ones. And in areas where it's not possible, we turn to our Asian partners. For example, the Spanish suppliers who helped us construct the metro no longer fit into the budget because of the current euro-ruble exchange rate.

Has Moscow been able to build close relations with Chinese suppliers, including those for the construction of the metro?

The metro is Moscow's principal means of transportation. In other metropolises such as Tokyo and Beijing, the situation is the same. Every month a Chinese delegation comes to Moscow and a Russian delegation departs for China. The Moscow metro has one particularity: the arrival frequency of one train per minute. No one in the world can beat this frequency. Only now Chinese companies are starting to have their trains arrive at similar intervals, which is why they are interested in the Moscow experience. In turn, China is the fastest in the world concerning the construction of new stations.