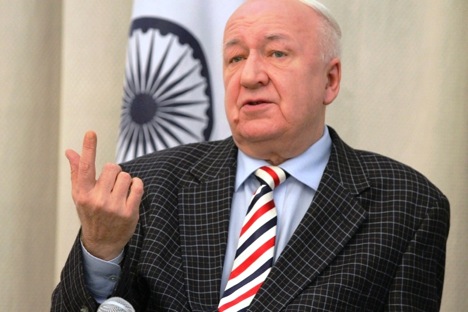 The India-Russia friendship is unparalleled in scope and is grounded in a history of trust and close interaction, says Russia’s Ambassador to India Alexander Kadakin. In this interview with RIA Novosti, the Russian envoy speaks about a host of issues, including the upcoming BRICS summit in Russia, the excitement among Russian investors about the Make in India programme, and the unique nature of India-Russia cooperation, which makes the US a distant competitor.

In July, the sixth BRICS summit will be held in Ufa. Which issues will figure prominently on the agenda?

The BRICS meeting in Russia will be largely devoted to enhance our practical cooperation and to further strengthening this current BRICS format, taking into account its potential establishment as one of the strategic elements in global politics. Consultation continues on issues surrounding the establishment of a virtual secretariat of the “Five”, a BRICS parliamentary forum, and the internationalisation of cooperation in the sphere of culture.

In early February a meeting was held in Beijing between the foreign ministers of the RIC countries. What is your assessment of the results of the RIC meeting?

The final communiqué adopted a fixed commitment to strengthening the coordination of efforts across virtually the entire spectrum of international cooperation. I would like to emphasise our agreement to support the adoption of a UN General Assembly resolution on non-interference in the internal affairs of sovereign states. The ministers also opposed the practice of forced regime change and illegal sanctions.

Russia and China came out in support of India’s candidature to be a permanent member of the UN Security Council and a full member of the Shanghai Cooperation Organisation and the APEC.

How did the launch of the Make in India programme interest Russian investors?

It creates new opportunities for closer cooperation between Russian and Indian companies. Today, we are talking about putting forward such projects as the creation of a medium multi-functional transport airplane, a fifth generation fighter, component parts for the MC-21, and organising the manufacturing of the Ka-226.

In the near future, many other projects will appear along these lines showing the increasing cooperation of Russia’s regions with Indian states.

During his visit to India, Barack Obama criticised Russia. What was he expecting, knowing that he was speaking to a country with friendly relations with Russia?

The US does not like the fact that India has its own independent and measured position on the Ukrainian affair and will not follow in the wake of brazen American expansionism.

The Indian Foreign Ministry’s response to the attacks was simple and clear: the Russian-Indian strategic partnership was and remains steadfast. No one can drive a wedge in the friendship between Russia and India.

What are your views on the competition between the Russia and the US for India in the peaceful development of atomic energy?

Today, Russia is India’s only foreign partner that is actually carrying out joint projects in the sphere of atomic energy.

The KNPP reactors that are under construction are considered to be the safest and most reliable in the world. The cost of electricity generated is already within the acceptable consumer market level for Indians at about Rs 3.5 per kilowatt/hour.

Do you think the US can challenge Russia in the military technology market in India?

The Americans are still a long way off from Russian-Indian cooperation. This area of interaction remains the centre of our strategic partnership with India. Here, we are talking about complicated joint projects. This includes the best supersonic missile in the world, the BrahMos, which has already been accepted into service and is simultaneously being adapted for use in all services. This is both an FGFA, and MTA.

The long-term programme for military-technical cooperation for 2011-2020, along with more than 20 intergovernmental agreements, is the "operational stronghold" for cooperation in this area. The portfolio of contracts is worth more than US$ 35 billion. Eighty percent of the Indian navy is equipped with our equipment, and 70% of the Indian Air Force. No other country in the world is so closely linked.

The interview is abridged. Read the full version in Russian, published by RIA Novosti.