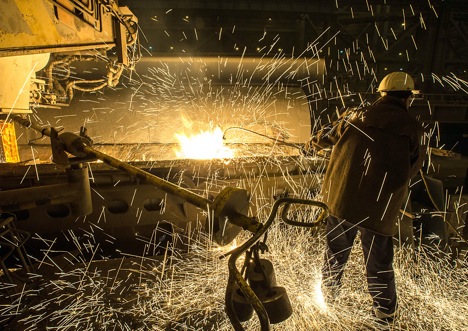 India may turn from a net exporter, to a net importer of steel, and the weakening of the Russian currency will only accentuate this trend. Source: Sergei Savostyanov / TASS

The sharp fall in the value of ruble has made Russian steel cheaper, and has forced Indian steel makers to lower their prices.

The fears of Indian steelmakers have been confirmed – the significant devaluation of the Russian ruble has led to Russian steel becoming much cheaper. Indian consumers now find it more profitable to purchase Russian goods.

The largest steel producers in India are planning to lower steel prices to the lowest level in the last 12 months. Prices for hot-rolled steel in Mumbai have fallen by 10 percent since the middle of last year.

According to the Ministry of Economics of India, “the prices of some grades of imported rolled metal products have reached absurd levels, forcing Indian manufacturers to lower their prices. This raises concerns that our exports will decline, while imports will flood our market.”

Russian steelmakers can now sell steel at 25% less than in July 2014, due to the weakening of the ruble. According to experts, Russian companies now have the ability to offer discounts, for example, on hot-rolled products, which Indian companies are now selling at $550-600 per tonne.

In addition to cheap Russian steel, the situation is aggravated by increased deliveries from South Korea, which has a surplus of steel and is now looking for new markets. Another important trend is the  increasing imports from China, where the cost of rolled metal products fell by 22 per cent.

Indian steelmakers claim that prices will keep falling for the next few quarters, unless the Indian government does something to counter the influx of cheap imports. They are asking the government to restrain imports by higher customs duties on foreign steel, and ensure a balanced steady flow of imported steel into the country. This last can be achieved by a refusal by the Bureau of Indian Standards to issue quality certificates, which are required for imported goods.

“We ask the government to turn its attention to the quality standards of foreign manufacturers, and we expect to see changes in customs policies and tariff barriers, in order to block the path to cheap steel,” said the head of JSW Steel, one of the largest steel companies in India.

India’s positions in the global steel market has come under attack. Experts believe that traditional foreign consumers of Indian steel, primarily in the Middle East, may now start buying the Russian steel, especially since the sanctions imposed against Russia have considerably weakened the demand for Russian goods in the West. The increasingly active Chinese steelmakers, in the Middle East market, are only exacerbating this situation.

According to a senior economist at the research department of Ministry of Steel, A.S. Firoz, sometimes this year, India may turn from a net exporter, to a net importer of steel, and the weakening of the Russian currency will only accentuate this trend.

Materials from Metaltorg.ru and Kommersant were used in the article.