Over $1 billion stolen from banks by hackers 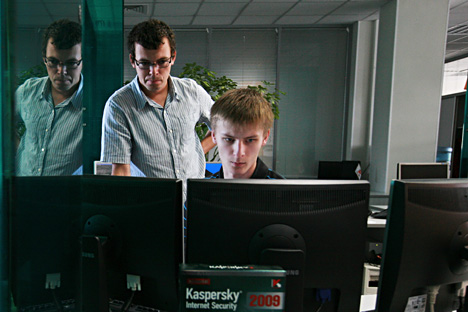 An analysis conducted by Kaspersky Lab concluded that the countries worst affected by the attacks were Russia, the U.S., Germany and China. Source: Valery Sharifulin / TASS

A group of hackers has stolen around $1 billion from bank accounts, Kaspersky Lab, an internet security company, has revealed in a report. The situation is unique in that the perpetrators were stealing money directly from banks rather than their clients.

An international gang of hackers called Carbanak has stolen at least $300 million from clients’ bank accounts in various countries, Kaspersky Lab said in a report on Feb. 16, 2015. The total amount of stolen funds may be considerably higher and could exceed a billion dollars.

According to the report, the scam has affected over 100 financial institutions in 30 countries, including Russia, Japan, Switzerland, the U.S. and the Netherlands. No specific banks have been named and an investigation is in progress.

Banks have always been an attractive target for cybercriminals. However, according to Kaspersky Lab experts, previously cyber-attacks were almost always directed against bank clients, whereas this attack targeted banks directly.

“This crime marks a new phase in cybercrime,” Sergei Lozhkin, an antivirus expert with Kaspersky Lab, told RIR. The name Carbanak first came up in late 2013, he recalled. A Ukrainian bank had asked Kaspersky Lab for assistance in a criminal investigation. “Somebody was mysteriously stealing money from the bank’s cash machines. Back then we thought the incident was a routine hacker attack,” Lozhkin said.

However, several months later a Russian bank approached Kaspersky Lab with a similar problem. One of its systems was issuing warnings about data being sent from a domain controller to China.

“We promptly detected malware in the system, wrote a batch script to remove the malware from the affected computers and rolled it out to all of the bank’s computers,” Lozhkin told RIR. “It goes without saying that we preserved samples of the malware. That was how we first got to know Carbanak.”

According to the company’s experts, bank robberies carried out by Carbanak were different from anything they had seen before. The cyber gang used methods that allowed it to operate irrespective of the software used by a bank, even if that software was completely unique. The hackers did not even have to break into bank servers. They simply infiltrated the corporate network and tried to mask their fraudulent actions as legitimate ones.

Traces of contamination at PR agencies

The criminals spread the Carnabak malware to the computers of bank employees that process daily transfer data and manage accounts. In many cases, the hackers sent infected emails purporting to be from the targeted individuals’ colleagues. This gave the hackers access to the banks’ internal networks. They could trace all the actions of bank staff, down to specific keyboard strokes, and then remotely send cash withdrawal requests to bank machines and transfer money to counterfeit bank accounts.

“The scam primarily targeted institutions in the financial sector,” Lozhkin said. “At the same time, we detected traces of the virus at cash terminals and in PR agencies.”

An analysis conducted by Kaspersky Lab concluded that the countries worst affected by the attacks were Russia, the U.S., Germany and China.

The company’s experts cannot disclose details about Carbanak until the investigation is over. All that is known about it is that it is an international gang made up of citizens of Russia, Ukraine, several European countries and China. “We also know that in order to get the money from bank accounts or ATMs, the criminals employed the services of so-called drops or money mules,” Lozhkin added.