A taste of Siberian Health for Indian consumers 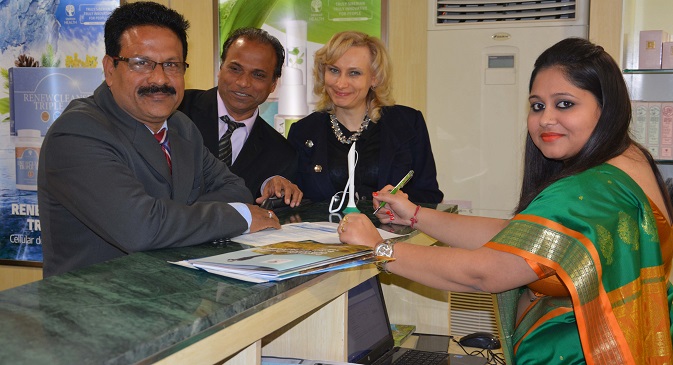 The Russian company is planning to open offices in Mumbai and Bangalore and some other cities within next six month through franchising model. Source: Alexandra Katz

By opening its office in Lajpat Nagar, the bustling market of the South Delhi, Siberian Health International, a Russian from Novosibirk, Siberia, has challenged the common perception of India as the largest exporter of healthcare and cosmetic products to Russia. India is a huge market for selling personal care products too, the company believes, especially when the product has some unique features.  In case of Siberian Health, it is the herbs and minerals collected from Baikal Lake and Altai region of Russia known for their unique ecosystem.

Siberian Health Corporation was established in 1996 by two young entrepreneurs, Evgenij Volikov and Tatiana Gorohovskaya. By 2001, the company had its own Research and Innovation Center located in Akademgorodok, Novosibirsk. The center conducts medical and biological research for developing new recipes for the company’s health products based on science. Since 2004, the company started its international expansion in CIS countries, Europe and US. Within a decade, Siberian Health launched business in more than 20 countries, with India being the 25th one.

“We opened our office in Delhi on February, 1. It was a so-called technical launch, although the sales operations have already started. For the next three months, we will be looking at the response. And by the end of April we are planning to have an official opening supported by advertising campaign and other activities,” Aislu Babakanova, the Head of Start-Up Department, Siberian Health International, told RIR in a telephone interview.

According to her, Siberian Health International Private Limited was registered in India about a year ago, but it took quite long time to register the brand and all the products, as India is not an easy country in terms of bureaucratic procedures.

“India is interesting from many points of view.  There is a large Indian diaspora in Russia as well as in US, and there were many people who were interested in our products, some of them were even sending our products to India,” says Babakanova. “People started asking where to buy our products in India, so we decided why not to enter India. We conducted market researches and understood that we can be competitive, even though India is the global pharmaceutical giant. Moreover, we not only offer products for health and beauty care, but also a business”.

Siberian Health is a direct sales company,which means the products are sold face-to-face, directly by independent salesperson to the consumer. It is also known as multilevel marketing where actual sale sales happens at the end of a chain of distribution and all members of the chain receive compensation in some way or the other.

The company started appointing sales representatives (called “partners” in the company terminology) in India and has several partners from Russia who arrived to India to develop sales here. Nikolay Kislov, one of such partners, believes that Siberian Health products will have a unique niche in Indian personal care market, as they are completely organic. “This is eco-cosmetics, we do not use parabens, sulphates, artificial colours, petrochemical cleansers and so on, and we don’t test products on animals”.

Babakanova adds that Siberian Health is focusing on eco approach and is engaged in charity work in the environmental field. “We protect Lake Baikal, forest reserves. In India after six months or so we are planning to start doing the same, probably, sponsoring some environmental projects, parks, lakes, rivers. It is a part of our strategy in all countries”.

India Direct Selling Association(IDSA), which has about 20 members, including international giant like Oriflame, Amway, Herbalife and others, estimates the direct selling industry to touch over US$ 1.74 billion by 2014-15, up by almost 70% from 2011-12.

Rajat Wahi, partner and Head of Consumer markets, KPMG India, says while the global direct selling industry estimated to be US $ 167 billion in 2012-2013, in India it was only US$ 1.15 billion. The industry has been the fastest growing non-store retail format, recording a double-digit growth of more than 20-22 per cent over the past five years, and has a huge potential for further growth.

The IDSA’s 2014 survey claims the industry may reach US$ 5.46 billion by 2019-20 while KPMG experts believe that the industry has the potential to reach US$ 10.3 billion by 2025. The Asia-Pacific region forms the largest direct selling market in the world, with a share of 44 per cent followed by North America, Central and South America (20 per cent share each) and Europe (15 per cent), according to KPMG. However, direct sales in India still form only around 0.4 per cent of the total retail sales, which is far lower than in other Asian countries and comparable economies (China or Malaysia, for example).

According to experts, wellness, cosmetics and personal care segments dominate the Indian direct selling market accounting for about 47 per cent share. The industry engages about 5.8 million people, most of whom are women, and this number may grow to 18 million by 2025.

Babakanova says for next year Siberian Health will be testing the market. “India, in terms of size, is like eleven Russias. Considering our sales volumes in Russia, we understand what we can achieve in India. However, we are yet to establish ourselves in the market, we understand that sales volumes won’t happen instantly,” she adds.

Oriflame, Amway, Herbalife and Avon, selling healthcare and beauty care products, will be the main competitors for Siberian Health in terms of business model while scores of local Ayurvedic brands will pose tough competition from the organic features point of view. In terms of pricing, according to Nikolay Kislov, there are product available for different categories of consumers, with the prices varying from 350 INR (US$ 5.6) to 4000 INR (US$ 64).

The Russian company is planning to open offices in Mumbai and Bangalore and some other cities within next six month through franchising model. The company also plans to add two more offices in Delhi.

From wife to boss: The story of Russian women-entrepreneurs in India

At present, among 25 foreign counties where Siberian Health is operating, it’s operating successfully in Belarus, Mongolia, Germany and the Czech Republic for five-seven years. In the United States also, it has been very successful. “Among our new countries it is Vietnam, which started being profitable just 1.5 years after launch. Last year, we have launched in Poland and Spain. In Europe, most of the sales are happening via Internet as it has good penetration there. It is not yet clear how it will be in India,” Babakanova says.

Industry experts point out that direct marketing business is complicated in India, as a number of companies have used the same model to conduct fraudulent activities and the impact these frauds had on the industry poses biggest challenge to its growth. The IDSA has been demanding a separate legislation for direct selling industry in India and its exclusion from Price Chit Fund Money Circulation Act (PCMCS Act) for years.

“PCMCS Act in its present form is unable to distinguish genuine direct selling companies … from pyramid or Ponzi schemes. Like other countries, India needs to amend this act and create a conducive legal environment for the Industry,” said Ajay Singha, executive director of The American Chamber of Commerce in India (AMCHAM India), while commenting on the arrest of Amway India CEO William S. Pinckney by the Andhra Pradesh police at Gurgaon in May 2014.