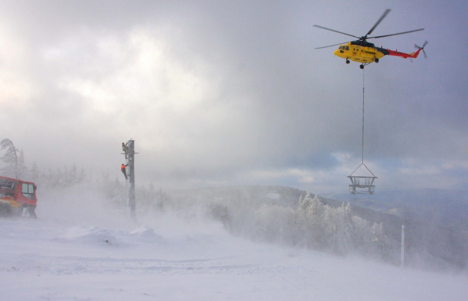 Work has begun on a prototype of the latest military transport helicopter, which could replace Mi-8, and will deliver higher performance and efficiency.

Russian military-industrial complex is already working on a prototype of the latest military transport helicopter, which will be ready in 2-3 years and will replace the Mi-8 in the future, a well-placed source told RIA Novosti.

Mi-35M was selected as the reference model for the creation of the new helicopter that would be slightly larger than the Mi-8, the agency's interlocutor said. According to the source, the new machine will have greater performance characteristics, enhanced efficiency, load capacity and flight range. There is a plan to install domestically made aircraft avionics on the helicopter.

However, the source in the defence industry did not confirm this information, except for saying that as of today, there is no such programme in the product line of Russian helicopters.

Who will replace Mi-8?

To date, there are two promising projects of medium and heavy helicopters in the product line of Russian Helicopters - Mi-17A2 and Mi-38. They could potentially replace the workhorse Mi-8, which in 2015 will celebrate 53 years of its first flight.

Helicopter Mi-171A2 is the most modern addition to the family of the world's best-selling helicopter - the Mi-8/17. Despite the familiar shape, the Mi-171A2, according to its developers, is actually a new machine. Its performance characteristics are superior to the Mi-8. It has a more powerful engine and modern avionics certified by ARMAK. The modern version of this helicopter, the Mi-17A2, will go into mass production in 2015.

In addition to the Mi-17A2, which can be classified as medium-sized helicopter, the Russian Helicopters decided to diversify the line of civil machines and created a heavier and higher load capacity Mi-38, which the company itself considers the leader of the national helicopter industry and the key model for future export promotion.

Besides its capacity to operate at any time of the day in different climatic conditions, this helicopter also fully complies with Russian AP-29 standards, European JAR-29 and American FAR-29. The Mi-38 is one of the most versatile and multifunctional helicopters today - a variety of its modifications have been developed.

Compared to its predecessors - the Mi-8 helicopters - the Mi-38's maximum speed has increased by 50 km/h and the maximum cruising speed - by 45 km/h while the vibration level in the cabin has reduced. The cruising speed of Mi-38 reaches 295 km/h and the flight range 1200 km. Through the use of modern avionics IBKV-38, the helicopter incorporates the principle of glass cockpit - during the flight all the indicators are displayed on the LCD. This allows the crew to quickly analyse the readings and be guided in the flow of received information, to increase the crew's situational awareness, which provides additional flight safety.

Is another replacement necessary?

Given the fact that Mi-38 and Mi171A2 are not produced commercially yet, it would be irrational to create another machine to replace the Mi-8, deputy editor of aviation magazine Vzlet (Take off) Vladimir Shcherbakov said in an interview to RIR. Currently the line lacks only a light helicopter, such as Robinson R44, the expert said.

Mi-8 and its modifications form the basis of the helicopter fleet of Russia (1192 machines), as well as the lion's share of the Russian Helicopters order portfolio (about 60% of the total number of ordered machines). Due to its high flight performance and high reliability, the Mi-8 is operated in 30 countries with various climatic conditions - from the deserts of Afghanistan and Pakistan to the highlands of the Venezuelan llanos.