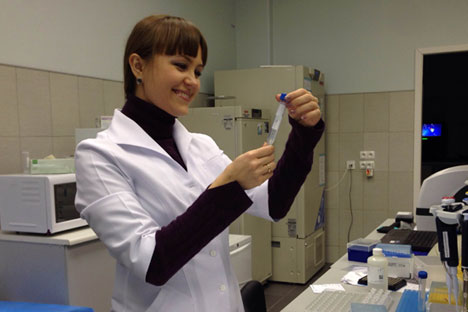 Volunteers from the most common and rare ethnic groups will be recruited to participate in the Russian Genomes project. Source: Press service of St. Petersburg State University

St. Petersburg State University has begun work on a data bank of genetic portraits of the peoples of Russia. It is hoped that this will increase the effectiveness of disease treatments and to better understand Russia’s population. The research results will be open to the public.

Scientists from St. Petersburg State University's Theodosius Dobzhansky Center for Genome BioInformatics are planning to create genetic portraits of the peoples of the Russian Federation. Russia is inhabited by more than 180 different peoples.

Volunteers from the most common and rare ethnic groups will be recruited to participate in the Genome Russia project.

The exact criteria for selection are still in progress, but it is clear that each "portrayed" person will be asked about the origin of their parents and grandparents.

"Our goal is to describe the variations in the human genome in different groups of the Russian population, to determine the characteristics that influence the spread of diseases, as well as to create an information base of medically relevant genomic variants specific to the population," Professor Stephen J. O'Brien, the head of the Center for Genome BioInformatics, told RIR.

O'Brien is the last student of Theodosius Dobzhansky, an American geneticist of Russian origin, who laid the basis for the synthetic theory of evolution and also worked at St. Petersburg (Leningrad) State University in the 1920s.

The foundations for the medicine of the future

According to O'Brien, the knowledge of how the genetic characteristics of peoples exactly influence the predisposition to certain diseases is one of the foundations for future medicine.

It is known, for example, that drugs have different effects on different peoples and there are there are ethnic groups that are more prone to certain diseases.

However, there is no genetic database of Russians, Tatars, Chechens and other inhabitants of Russia, nor is there a description of how the genomes of the Russian population are different from the populations of other regions of Earth.

One of the few known instances known is that Ashkenazi Jews (from the western regions of Russia, Poland and Central Europe) have a greater predisposition to Tay-Sachs disease that affects the central nervous system, than other peoples.

"The population of the Russian Federation is a rich mixture of many different geographic and ethnic groups including ethnic Russians, Tatars, Komi, Chechens and many others,” O'Brien said. “Consequently, we plan to include all ethnic groups, whose representatives are willing, to take part in the project.”

To pick candidates for the selection, the researchers consult ethnographers and doctors. At least half of the selection should consist of the trio of a "mother, father, child," to trace the nature of the transfer of genetic traits.

Genomic research can also help to trace the paths of migration and settlement of people on the territory of Russia. Similar projects have been carried out previously in other European countries, China, Japan and the U.S.

Additionally, there are already examples of the use of personalized medicinal approaches that can be applied in the context of future results of the Genome Russia project as well.

For instance, a medication called Vemurafenib for the treatment of metastatic melanoma is only effective for individuals with mutations of the BRAF gene. The frequency of this mutation among the peoples of Russia has yet to be established.

According to O'Brien, a medication called BiDil was approved by the U.S. Food and Drug Administration (FDA) specifically for the treatment of African Americans with congestive heart failure.