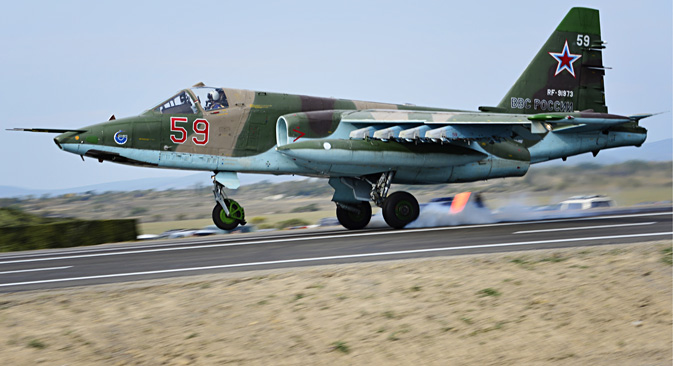 Forty years ago, an attack aircraft Su-25 (GrachRook) took off from an airfield in Moscow suburb Kubinka for its maiden flight. Time has not dimmed its lustre. This aircraft remains a fearsome fighting machine, and can be called the future of Russian attack aviation.

The 17-tonne machine, equipped with two jet engines, can reach the speed of 975 km/h at sea level, operating in a combat radius of 300 km. Ten hardpoints allow Su-25 to use the entire range of shock and defensive weapons. However, the trump card of Grach is its unique vitality on account of efficient armour use and filling of holes with polyurethane foam.

Relatively low cost, coupled with low maintenance needs, have enabled the creation of about 1,300 of Su-25, that are in service in different parts of the world. This attack aircraft was used in recent conflicts: to force Georgia into peace, as well as in the combat zones of Ukraine and Iraq. Moreover, according to the Iraqi Ministry of Defence, only timely supply of 15 Su-25 could change the course of events in the confrontation with terrorist groups of the Islamic state.

On the other hand, when the Russian Air Force was using Su-25 in South Ossetia to prevent the march of the Georgian army equipped with Soviet air defence systems, transferred to Georgia by Ukraine, it lost three attack aircraft, according to official figures. The Chief Designer of Sukhoi, Vladimir Babak, said that after the missile attack on air defence systems during the combat mission three Su-25SM returned to the airport base and will be repaired. In the ongoing conflict between Kiev and the unrecognised republics of New Russia, whose armed forces are equipped with various air defence systems, mainly MANPADS of twentieth century production, about 11 Su-25 were reported to be destroyed and 12 disabled.

This data clearly shows that the aircraft is out of date and needs to be upgraded for the use of modern high-precision weapon systems. At the same time, it can be used effectively against the terrorist groups that don't possess air defence systems.

Russia's upgrading of Su-25 to SM3 version can extend the aircraft’s operative life for at least another ten years. This modified version features advanced avionics, including the use of the GLONASS system (GPS), increasing the capabilities of autonomous flight without the use of terrestrial services in any weather conditions. The first Su-25SM3 started arriving to the troops, to the base of Southern Military District, in February 2013. The modernisation of Su-25 will continue, as this attack aircraft's total combat load is unmatched in the world, Air Force Commander Victor Bondarev said in his interview to RIA news agency. In other words, this dedicated attack aircraft will continue to be in demand by the Russian armed forces in the future.

According to the source from the Air Forces Central Command, in addition to Su-25 modification described above, in 2014 the troops received a specialized version of the attack aircraft, optimised for destroying and breaking down the air defence systems.

Thus, for now the decommissioning of Su-25 is postponed. Having undergone certain upgrades to better fit the modern conditions of warfare, the machine remains competitive not only in the domestic, but also in the foreign weapons market.