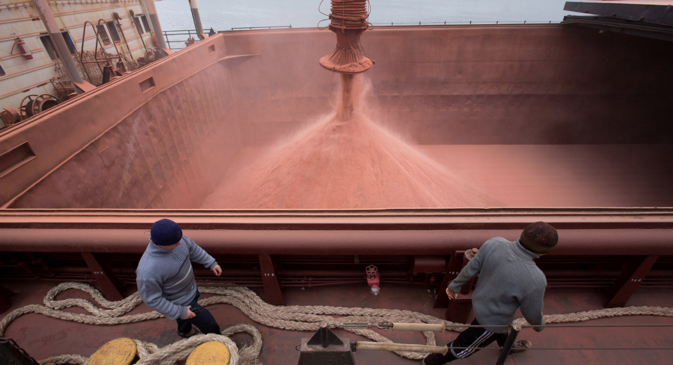 Uralkali announced that the contract with India, for the first time in seven years, might be signed before the one with China. Source: Getty Images / Fotobank

Uralkali, the Russian potash giant, has presented a strategy for reviving the fortunes of the company. Uralkali is planning to sign a new contract with India, and may do so before it sings a new deal with China, its top client.

The world’s largest potash producer, Uralkali, has presented an update to its development strategy until 2020. This revision was necessitated by the accident at its mine in Solikamsk, which occurred in November last year.

The new strategy roadmap, presented early March, calls for a sharp increase in capital expenditures and the construction of a new mine at the place of the one now flooded.

The timetable has been revised: by 2017, the project involving the expansion of capacity at the Solikamsk-3 mine will be completed. To ensure safe operations of the remaining reserves in the Solikamsk-2 field, the company will be building two new shafts by 2020.

The greatest expenditures over the next six years have been planned for 2017-2018.

In addition, the company had earlier announced that in 2021, it would launch mining operations at the Polovodovsky Deposit, which will add another 2.8 million tonnes to its capacity, increasing it to 17.2 million tonnes. However, this project has not been finalised yet, and it is not included in the new strategy.

For now, the company’s financial condition leaves no room for pessimism.

Meanwhile, in 2014, the company reported a net loss under IFRS of $631 million, against a profit of $666 million a year earlier. The change in this indicator is the result of foreign exchange losses and a decrease in the fair value of derivative financial instruments by $2.014 billion. The revenues, however, increased by 7% to $3.56 billion.

The new changes being made by the company are designed to help it keep its existing share of the world market. According to the company, the global potash demand in 2014 reached 62 million tonnes. In 2015, this demand is projected to be 58-59 million tons. The largest market, historically, for Uralkali is China. In 2014, this country accounted for 19% of the company’s total sales. The other major sales were in Latin America – 18%; South-East Asia – 15%; Europe – 12%; India – 12%; and the United States – 6%. The company sold 16% of its production in Russia last year.

The world of potash fertilizers is eagerly waiting for the signing of a new contract between Uralkali and buyers from China, the world’s largest consumer of potash (14-14.5 million tons in 2014). The price that China eventually pays, acts as a benchmark for other market participants, including India (4.3 million tonnes), for which the price is usually set a bit higher than for China.

However, in February, Uralkali announced that the contract with India, for the first time in seven years, might be signed before the one with China, because the latter has large reserves.

The company said it plans to sign a new contract with India in late March-early April. As for   China, there is no certainty yet. Oleg Petrov, Sales and Marketing Director, did not rule out the possibility that no new contract would be signed with China. He, however, added that the company, as before, expects to charge 10% more for its products, in comparison to last year’s prices ($305 per ton). Notwithstanding these developments, Uralkali still expects to see a decline in its sales in the two largest Asian countries in 2015. However, the manufacturer does not expect things to change with Brazil (9.1 million tonnes), other Latin American countries and the United States.