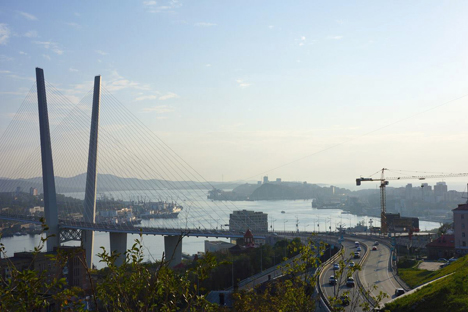 The view of the port zone and the bridge over the Golden Horn bay in Vladivostok. Source: Yulia Shandurenko

Russian President Vladimir Putin has announced that the city of Vladivostok and surrounding districts are to be given the status of a free port in order to foster economic growth and investment. The port will be established for 70 years and will include a port and airport zone, an industrial zone, a scientific zone and a tourist-recreational zone.

Russian President Vladimir Putin has proposed boosting the economy of the Primorsky Territory in the country’s Far East by giving the Pacific city of Vladivostok and the surrounding region the status of a free port.

Putin made the announcement during his address to the Federal Council on Dec. 4, 2014. The bill is currently being developed and the first details of the project have now emerged.

Kommersant reports that the Ministry for Development of the Russian Far East proposes to give the status of a free port to seven districts and municipal areas of the Primorsky Territory.

Not only ports can qualify as residents of the zone, but also airports and companies operating in the tourist industry.

Participants of the free port will obtain a simplified fiscal regime, a free customs area and territory for the development of their business. However, the benefits will not affect those who are already working in the Vladivostok Special Economic Zone.

According to the bill, the free port will include, besides Vladivostok, practically the whole Primorsky Territory – the Artyomovsky municipal area, the Nadezhdinsky, Shkotovsky, Partizansky and Khasansky districts, as well as the Pogranichny area on the border with China. They all can count on government support.

The free port is being created for a period of 70 years and will include four territories: the port and airport zone, an industrial zone, a scientific-promotional zone and a tourist-recreational zone.

Companies wishing to receive the status of resident must present a long list of documents and receive approval from the agency that regulates activities in the port territories. Residents must not participate in regional investment projects and must not have branches or representation offices outside the free port.

If a resident of the free port does not carry out their responsibilities in the course of two-three years, they lose their status. An observation committee with the participation of Presidential Plenipotentiary Envoy to the Far Eastern Federal District Yury Trutnev will be entrusted with monitoring the procedure.

The main privileges for residents will be the possibility of obtaining state land, fiscal benefits on property and on land tax, and the free customs zone. Direct state aid can be obtained for the construction of infrastructure (subsidies or contribution to the authorized capital), but the principal source of financing must be personal resources and the territory's budget.

The Ministry for Development of the Russian Far East explained to Kommersant that the project is now being discussed with the other ministries and will be presented to the government by April 30.

This article is abridged from the original, which first appeared in Russian in Kommersant