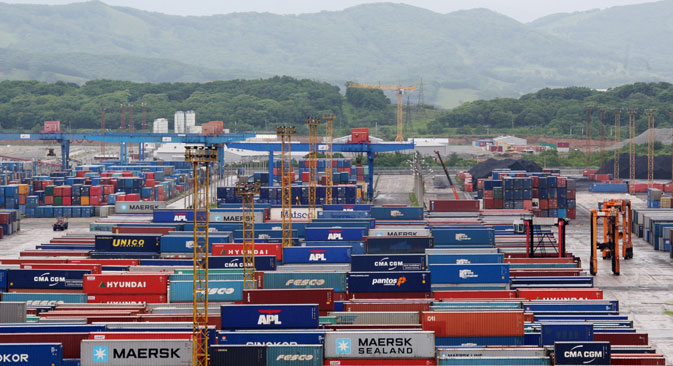 With the Russian economy experiencing recession and ruble plunging 50 percent against the dollar within a few months, Indian companies working in Russia are facing difficulties. However, this moment of crisis is a perfect time to figure out “who are your best friends”, Indian industrialists and exporters believe.

Since the Russian economy plunged into stagnation at the end of 2014 as a result of various factors, including Western sanctions and the plummeting oil prices, many foreign investors and traders suffered losses. Some of them had to wind up their activities in the Russian market;the more intrepid and enterprising lot, however, continued developing business despite challenges.

Earlier this year, a UN report on Global Investment trends dated January, 29 estimated that FDI flows to the Russian Federation had fallen by 70% to around US$19 billion. The reasons, according to the UNCTAD, are both the country's negative growth prospects and the exceptional level reached in 2013 when Russia had suddenly jumped to the third position in  the list of top 20 countries in terms of FDI inflows. The reason for this was a mammoth US$ 55 billion Rosneft−BP deal that pushed the FDI in Russia up by 83% to US$94 billion in 2013, making it the world's third largest recipient of FDI for the first time ever. A year later, Russia has disappeared from the UNCTAD FDI inflows ranking.

At the same time, many analysts point out that the devaluation of ruble makes investments in Russia cheaper. The Russian Direct Investment Fund (RDIF) spokesperson told RIR that the current economic downturn and attractive company valuations given current asset prices and exchange rates create a unique investment opportunity for the companies with long-term views on Russia. “During two years after the economic crisis of 1998 and 2008, the Russian stock market in dollar terms grew 7 times and 5 times respectively,” he noted.

Grigory Birg, an analyst at Investcafe, disagrees: “Russia’s attractiveness for foreign investments has reduced. Along with existing problems of relatively weak level of protection of investors’ rights in Russia and its bureaucracy, other problems such as a sharp decline of economic environment emerged”. Birg points out that one should expect the country’s economy growth to decline significantly and inflation to continue growing in next several years.

With love from India

India, an emerging economy, however, continues to bet on Russia. “The major volume of Indian investments in Russia is in mining sector and manufacturing industry. There are no doubt that negative economic situation will lead to a revision of investment plans. However, I don’t expect mass exit of investors as even with the growth slowdown. The Russian economy remains attractive due to large size of its domestic market, ranked 7th according to Doing Business”, Timur Nigmatullin, financial analyst with Finam Investment Holding, says.

According to him, India contributes not more than 2 per cent of the overall FDI in Russia. As for the India-Russia bilateral trade, analyst says, it is dominated mainly by defence and machinery contracts, which are normally long-term ones.

“I don’t think they will be revised considerably,” Nigmatullin said. “Moreover, I expect ruble to gain about 10-20% in long term perspective as some of the depreciation factors such as panic-buying of foreign currency by people and business to pay for external debts will be leveed”.

However, in the case of non-defence trade where the governments of both countries are less involved or not involved at all, the situation looks different.

Sudhir Pal Sabharwal, vice-president, Pacific Global Exports,  that manufactures and exports lather and cotton garments to Russia, says his company had to adopt some “anti-crisis” measures, including extending the credit period to Russian byers. “We try to make whatever corrections we could so that we are able to sustain our sales. It is like in the marriage, in the time of crisis you have to take care of each other, so that’s the way we are dealing with our byers”.

He believes that the current economic slowdown is a temporary phase. “I think the crisis should not continue for more than a year.  Being in the Russian market for the last 20 years, I have seen the market during the default of 1998, so I kept everything in the back of my mind,” Sabharwal says adding that Russia may soon come out of the recession.

Anish Unnithan, director, Suryamangalam Group that imports compressors, motors, turbines and various other steel and power industry products from Europe, US, Russia and Ukraine to India, says the company bore about Rs 35-45 crore (US$ 5.57 million to US$ 7.16 million) losses since last year. The depreciated ruble in Russia and political and economic turbulence in Ukraine lead to delays in shipments from both countries and up to 300-400 per cent increase in prices.

“Just recently we had a case where for a tool which used to cost us Rs 7 crore, we had to pay Rs 32 crore,” Unnithan says. “In this industry we sign contracts with a delivery period ranging from six month to one year. We signed contracts with certain prices a year back, but now the ruble has crashed and the companies are not able to supply to us at the same price, we are facing a lot of problems because we also had put in security deposits against those orders”.

Since the company supplies machinery and spare parts to various Indian companies, including the state-owned Steel Authority of India Limited (SAIL), the risk of delay in supplies and fluctuating prices forced the company to find alternatives to Russian machinery.

“In few upcoming projects where we had planned to put Russian technology, we have shifted to German technology,” Unnithan admits. “With European and American suppliers there is always assurance. That is why people prefer American technology although it is expensive, but they know they will get it. At the same time many manufactures in India depend and have always depended on the Russian machinery and spare parts”.

Abhilash Pillai, director of Regency Group that operates several Indian, Japanese and Italian restaurants in Moscow and deals in healthcare and garments business, says the restaurant business is the one that got affected the most because of its total dependence on imported ingredients.  Pillai expects Regency Group’s turnover in Russia to decrease from estimated pre-crisis US$100 million since the group had to “take a halt” on import-export business.

“In our leather business we have already signed the contracts for 8 years. The prices are fixed and we cannot change them. We can increase not more than 3-4 per cent, according to the contract. So now, we probably will have to stop the export as we are losing lots of money,” Pillai told RIR. “Not only me, whoever is dealing with exports to Russia, they all are suffering a lot.”

Although Indian businesspersons interviewed by RIR agree that Russia with its weak ruble becomes very attractive for foreign investors since the investment became cheaper, as for the export industry it is probably not the right time for new comers. “There won’t be any comfort level with Russian byers and partners. Indian companies will not be able to extend credits to them, and they need it now,” Sudhir Pal Sabharwal says. “Probably newcomers need to wait for another one-two year to enter the market.”