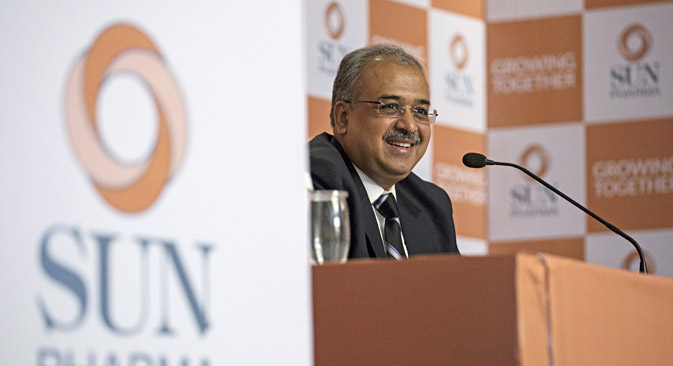 Dilip Shanghvi, Managing Director of Sun Pharma, told the media that the merger with Ranbaxy gives Sun the ability to invest in Research & Development. Source: Reuters

The closure of a $4-billion merger between Sun Pharmaceutical Industries and Ranbaxy Laboratories was announced on Wednesday in Mumbai. Sun Pharma had announced it was buying Ranbaxy for $3.2 billion in stock in addition to assuming $800 million of its debt in April 2014. Termed one of the largest M&A deals in the industry in the recent past, the merger has fortified Sun Pharma's position as the world's fifth largest specialty - generic pharmaceutical firm and the top ranking Indian pharmaceutical company, giving it a significant lead in the market share, the company said.

“The combined entity will capitalize on the expanded global footprint and enhance our dominance as a world leader in the specialty generics landscape,” chairman of Sun Pharma Israel Makov said. He pointed out that the deal would enhance the company’s leadership in existing markets and allow it to increase its presence in new markets.

Dilip Shanghvi, Managing Director of Sun Pharma, told the media that the merger with Ranbaxy gives Sun the ability to invest in Research & Development. The company is planning to increase R&D investments from the existing US$ 250 million to US$ 300 million this year.

“What I am looking forward to is the situation where we continue investing up to 6-7% of our turnover in research, which would allow us to invest close to $500 million in research,” Shanghvi said.

The combined entity looks at reaching $250 million synergies within a three year time frame. The turnover of the combined companies is expected at US$ 4.5 billion. With a combined team of more than 3000 employees and a set of more than 45 manufacturing facilities, Sun Pharma will now be selling its products in more than 150 countries, including Russia and the CIS where its presence was earlier not very significant.

“In Russia, South Africa, Romania and other markets we are not a big players, while Ranbaxy has bigger business there. By combining our portfolios with Ranbaxy, we will be able to grow faster in those markets,” Shanghvi said, adding that almost 40 per cent of the business of the combined entity comes from India and emerging markets, which are among the fastest growing markets.

Shanghvi's son Aalok will have a significant role in strengthening the company’s positions in the emerging markets.

“He has so many challenges, like devaluation of the currency in Russia, Ukraine, South Africa, he has a very interesting job ahead,” the Sun Pharma MD said.

According to him, Sun Pharma business in Russia was estimated at around US$ 20 million, while Ranbaxy’s business was worth more than US$100 million.

“The idea would be to invest in developing new brands in the OTC (over the counter) segment in Russia, as well as accelerating in filing a complex generic portfolio in this market so that we can work towards becoming a more meaningful player in the  market,” Shanghvi noted. “We will also evaluate whether we can produce in Russia locally. The decision may be taken within next 3-4 months.”

Incidentally, as a result of this merger, Shanghvi has overtaken Mukesh Ambani, Head of Reliance Industries, as India’s richest man this year, according to Forbes magazine.

Earlier, Denis Manturov, Russia’s Minister of Industry and Trade who recently visited New Delhi, announced that Ranbaxy was planning to establish a production facility in Russia within the next few years.

Ranbaxy has more than 20 years of experience in the Russian market. It has been operating in Russia since 1993 and emerged as one of the largest players in the generic drug segment, promoting its products across anti-infective, cold, pain management, cardiovascular, diabetology and other segments in 56 regions of Russia. The company was exploring opportunities to manufacture locally since 2006, when it explored the prospect of acquiring Russia’s large generic manufacturer Akrikhin. Since the deal did not work out, Ranbaxy turned to manufacturing some of its products through signing contracts with local companies.

Analytical company DSM Group estimates that the Russian pharmaceutical market grew by 13.3 per cent at the end of the fourth quarter of 2014, compared to the same period in the previous year. Throughout 2014, the market showed 9.3 per cent growth (in ruble value), although in volume it declined by 3.6 per cent.

The commercial OTC segment and the government segment (the reimbursement DLO programme) in terms of volume declined by 4.5 percent and 7.6 percent respectively.

According to a Deloitte 2015 report, although last year saw a slowdown in the Russian market’s growth rate, it is developing quite dynamically when compared to other European countries. While the unstable political situation may put long-term growth forecasts into question, Deloitte notes that the Russian market still provides significant opportunities for drug makers.