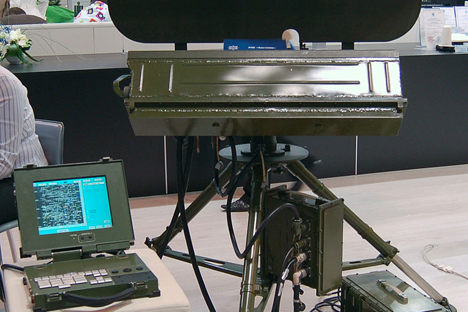 The Russian army’s Southern Command received a new radar for reconnaissance and fire power control – “Aistenok” (“Baby Stork”). It is efficient for use in local conflicts, allowing greater mobility during operations. This system is designed for “company-battalion” type units and is capable of detecting shots and devices both on the ground and in the air. The key objective of the 1L 271 radar is to optimise effective functioning for artillery units by detecting coordinates of enemy artillery and adjusting appropriate gun fire.

The radar system was developed by JSC Concern “Almaz-Antey”. The system weighs 135 kg and is modular. This enables reconnaissance units to relocate “Aistenok” by car and even manually, with 3-4 people. The radar can be assembled and prepared for work in 5 minutes. The structure consists of a tripod with radar support and a rotating unit, a transceiver with an antenna, an electric plant with the power supply unit, a primary information processing unit, a remote control and a radio station, all interconnected by cables. Information about its functioning is displayed on a color display of the control panel in a ‘laptop’ format. Data on detected targets is transferred via the installed radio station, which operates in the range of centimeters. Despite the absence of its own pivot mechanism, the antenna provides sector observation at 60 degrees azimuth beam width.

“It's not a very powerful, but an exceptionally mobile system that is difficult to detect,” retired Colonel Mikhail Tymoshenko, a military analyst, told RIR. “The system detects the enemy's calculation by computing the shots and the shell trajectory. The targets can be detected at a range from 200 m to 20 km.”

“Aistenok” is capable of performing three categories of tasks by complexity and type of detection. At very short distances it can track mortar rounds from 81 to 120 mm during flight. Additionally, the system calculates the mortar flight parameters and determines its launching or landing point. Calculating the launching point allows accurate retaliatory strikes against enemy mortar, calculating and adjusting the landing point.

When working with mortars the maximum detection range is reduced to 5 km. At such distances the radar is able to pinpoint upward or downward areas of mortar flight and to calculate coordinates of the mortar. The minimum distance at which the 1L271 system can detect enemy mortar is 750 m. The system fixes targets with an accuracy up to a few dozen meters. The extent of possible error depends on the type of target. Even with a survey error of 3-5 meters, the radar is able to calculate the location of the enemy mortar up to 30 meters. It is effective to control the firing of artillery from 122 to 152 mm caliber. The radar pinpoints explosions of projectiles and calculates their location at a distance of 10 km, accordingly adjusting the fire.

The radar's third function is to detect the heavy armor ground moving targets, such as tanks. The data about the location of enemy equipment at a distance of 20 km can be transferred to the artillery to make the strike.

The Russian armed forces have more powerful reconnaissance radar systems in service, but it is “Aistenok” that is most mobile and significantly increases the firepower of artillery.

Systems like “Aistenok” would thus be very popular with volunteers who are fighting in Donbass. Amidst controversy over whether to send weapons to Ukraine or not, supply of the new radar to the Russian army should help reduce “accidents.”