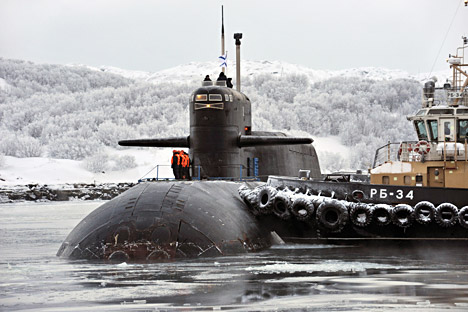 Russia can now afford to have at least two ballistic missile submarines out at sea at all times — one each for the North Fleet and the Pacific Fleet. Source: PhotoXPress

Deployment of Russian ballistic and multipurpose nuclear submarines on operational duty in the Pacific Ocean has increased almost 50% over last year, according to Russian Navy Commander-in-Chief Viktor Chirkov, indicating a much higher state of alert as compared with the same period last year.

“The operational deployment of ballistic missiles and multipurpose nuclear submarines in the Pacific Ocean is maintained at a level that guarantees our nation's safety. Moreover, between January 2014 and March 2015, deployment of submarines for operational duty has increased by almost 50% compared to 2013,” Chirkov said.

“The level of deployment may be even higher on some submarine projects, because there have been more military exercises in 2014 and early 2015,” Captain 1st Rank Mikhail Nenashev, Chairman of the All-Russia Fleet Support Movement, told Vzglyad newspaper.

“The Commander-in-Chief means business. Our probable enemies are monitoring these things. If the Commander-in-Chief had told a lie, it would not take long for Ms. (Jen) Psaki (spokesperson for the White House) to proclaim that 'The Russian military command is trying to mislead us. They don't have that many vessels, and they can't do anything.' Or perhaps she would keep quiet, but trust me when I say that they are monitoring this very closely,” Captain 1st Rank Igor Kurdin, Chairman of the Submarine Sailors' Club told Vzglyad.

Ballistic missile submarines play a vital role in military defence. Unlike missile silos or bomber aircraft, they are practically invincible — as long as they remain on combat alert duty. The nation's military security therefore directly depends on whether these vessels are on operational duty.

The strategic forces of the Pacific Fleet consist of two 955 Borey class submarines and three submarines of the 667BDR Kalmar (“Squid”) class that are nearing the end of their life cycle (one of them is undergoing repairs). This means that four submarines are battle-worthy.

11 ballistic missile submarines are now ready for combat duty in the Russian Navy.

There are also certain standards according to which a submarine may remain at sea for a strictly limited period of time.

According to Kurdin, there were periods when not a single submarine was at sea, and only a handful of them were on combat alert duty near piers at their home bases.

“They were ready to strike — we can fire missiles even when docked, but there was a time when there was simply nothing to go to sea with due to low operational availability of vessels, weapons, or crews,” Kurdin said.

Nenashev believes that even when times were hardest in the 1990s, at least one ballistic submarine was on combat duty at sea.

According to Nenashev, Russia can now afford to have at least two ballistic missile submarines out at sea at all times — one each for the North Fleet and the Pacific Fleet. During the period of an active threat, three submarines from each one of these fleets can be deployed at sea, for long periods of time.

“While the Navy had been previously constrained by financial and economic difficulties, now nuclear submarines go to sea to actually keep the nation safe. It is now safe to say that they will remain as sea for as long as required for our defence and safety,” Nenashev said.

The article is abridged. First published in Russian in Vzglyad.