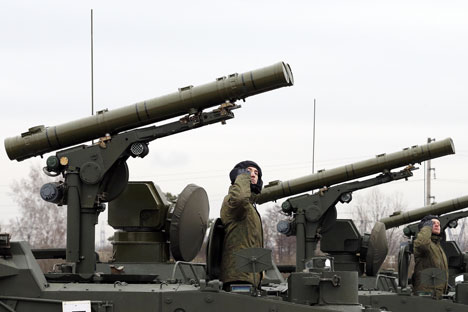 "Chrysanthemum," or 9K123 / 9M123? RIR often writes about Russian military equipment and these articles contain various names that consist of letters and numbers that say nothing to most readers. The editors have decided to rectify the situation and unveil what is behind these strange symbols.

Traditionally, in Russia, airplanes are named after their creators, or heads of the design bureau where they were developed. The number allotted is the number of its development. Usually, odd numbers are given to fighter aircraft, attack planes and interceptors, although there are some exceptions to this rule; the bomber TU-95, for example, or transport aircraft AN-125.

Taking Su-27 as an example, the “Su” is the abbreviated name of the design bureau that developed the plane, “Sukhoi”, and 27 is the number of development.

Often the numbers are followed by letters. First, take the letter “S”, which indicates that the aircraft is a part of a series. Then, as development and further work on the model continues, it receives the letter “M”, which means “modernized”.

This letter can be followed by the serial number of the modernization process; for example, the Su-27SM3. Occasionally, the letter “K”, which stands for “commercial,” is added, meaning that it is exported.

The letters “UB” mean “combat training” (uchebno-boevoy) and “P” means that the aircraft is an interceptor version (perehvatchik).

Whenever an aircraft; a bomber or fighter; with fundamentally new combat capabilities is created, the digital signage also changes. Hence, the bomber designed on the base of Su-27 was named Su-34 and the 4th generation aircraft, being a vastly upgraded and modernized version of Su-27, was assigned the name Su-35.

Armour: it's about the time

Regardless of the design bureau and the plant where the machine was designed and produced, there is a universal symbol “T,” which means “tank”. Then comes the year when the machine was ready to be handed over to the troops. The T-72 tank entered service in 1973, the T-64 and T-62 in the early 1960s. Before entering military service, the armoured vehicles are called “objects”, with an added factory index. So the latest Russian tank “Armata” still carries the name “object 148.” However, after being assigned to the armed forces, it will be officially named “T-14,” since the first ready-made prototype was demonstrated to the army in 2014.

The letters that follow the numbers are assigned in a similar way to the aircraft. However, due to the large number of upgraded versions developed,  the letters ‘A’ or ‘B’ are added with the letter “M.” In case of a globally upgraded version, the letter ‘Y’ is added with the ‘M’. In addition, for armour, the “K” stands for a command tank, and “C” is for export. An interesting detail worth noting is that the best selling tank in the world between 2001 and 2010, the T-90, entered into service under the new index arbitrarily, on a whim of the then leadership. Essentially the T-90 is a modernized version of the T-72 and was supposed to be deployed by the army under the name T-72BU.

А bouquet for the enemy

With missile armaments and defence, the situation becomes more complicated. Armaments work within the system, and the name of a specific machine is often represented by a specialized index, which is difficult to find in accessible publications.

In addition to alpha-numerical designations of weapons, the names are sometimes given on the basis of other traditions: for example, what the weapon can be associated with; for example, MANPADS are called “Needle” (Igla) or “Arrow” (Strela).

In certain cases the developers come up with a series of synonymous names. This is how, in addition to letters and numbers, a series of ACS were named after flowers; “Peony”, “Hyacinth”, “Tulip” and “Chrysanthemum;” which sound nice and are easy to remember.