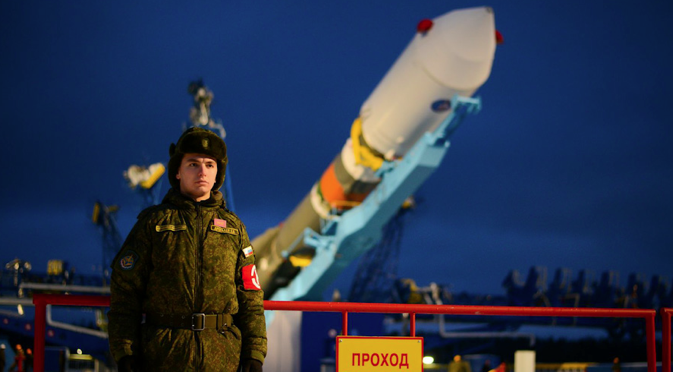 The effort of all mankind is to prevent the transition to full-scale war in outer space. Source: mil.ru

Confrontation between Russia and the United States is gathering momentum and may, literally, soon assume a cosmic scale. This is in reference to technologies that are being developed in the US which, in the near future, may affect the global balance of power and threaten to level the role of Russia's strategic nuclear forces.

Once rockets were invented to travel to space, their creators decided on additional uses for them, including for delivery of the most powerful existing weapons: nuclear ones.

The Outer Space Treaty of 1967 banned the placement of nuclear weapons in outer space. However, this condition did not apply to conventional weapons. So, if you can not “bombard” the enemy with nuclear missiles from space, you can still intercept those missiles. This loophole was also dealt with in negotiations that culminated in the signing of the 1972 Treaty on the Limitation of Missile Defence.

In 2001, the United States withdrew from the ABM Treaty. The US has now positioned marine and land-based Aegis systems capable of shooting down missiles with a range of up to 5,500 km in locations across the world. Additionally, there are silo-based interceptors GBI, the creation of a whole system of radars (including the floating SBX) and the placement of the latest complexes THAAD in South Korea to cover the “dark” areas for the US missile defence system over Siberia and the Russian Far East, where the initial and the most vulnerable flight zone of the Russian ICBMs is out of visibility range of American radar.

On April 12, 2015, the Russian EKO troops spotted a group of electronic reconnaissance satellites on the orbit.

“This satellite constellation is being developed to carry out communications surveillance of the facilities based inside Russian Federation territory,” said Oleg Maidanovich, commander of the Aerospace Defence Forces' Space Command Troops.

The Ministry of Defence has not indicated the state affiliation of the satellites, but analysts point to the ownership of the spy satellites as the United States.

“Obviously, we are talking about the United States, which possess electronic reconnaissance satellites, in particular the series ‘Ferret-D’, working in the upper range of the radio spectrum, where the means of guidance, detection and missile defence operate,”- Igor Korotchenko, chief editor of ‘National Defense’ magazine, told TASS.

Russia's abilities to respond to existing threats at this time are limited, not only from geopolitical, but also from the financial point of view. In the current situation, any response can only be asymmetric.

Given these circumstances, the Russian focus has been on the development of new ICBMs, the creation of universal air defence systems;PRO C-400 and C-500; and the modernization of the Moscow missile defence.

Tests are in progress for a new missile for the S-400 system, which has a range up to 400 km. This indicator applies to aerodynamic targets, such as aircraft. The exact distance and height at which missiles can be brought down (defeat range) is not specified, but it is reported to be capable of destroying missiles in the near space.

At the same time, work is underway on a system of air defence for new generation C-500 and the new system of the Moscow ABM A-235, which will work in tandem. The operation is scheduled to start in 2017. In the meanwhile, the Russian defence industry is going to raise the production of missiles for air defence and missile defence threefold, as compared with 2014.

In Russia, work is underway to ensure constant target intelligence. According to Anatoly Savin, the scientific director of JSC Almaz-Antey, an “original system of space intelligence” has been created which allows for detection and tracking the movement of US carrier-based compounds, as well as strategic NATO submarines, in the oceans.

“We began to keep virtually all of the world's oceans under constant surveillance,” he added.

Additionally, in the near future, expansion of the network of autonomous radar (RLS) in the Arctic region has been planned.

The effort of all mankind is to prevent the transition to full-scale war in outer space. Today, the US is not willing to negotiate. This explains the failure of the country to support the draft of a comprehensive treaty to prevent the deployment of weapons in the outer space, which Russia and China have been preparing since 2007.

In this situation, the United States will require a great deal of convincing that the agreement meets their interests. And that would only be possible with the building up of the very asymmetric measures that are underway in Russia and China.

To this end, China has already bought the Russian S-400 system.