Novatek to sell stake in LNG project in Russia 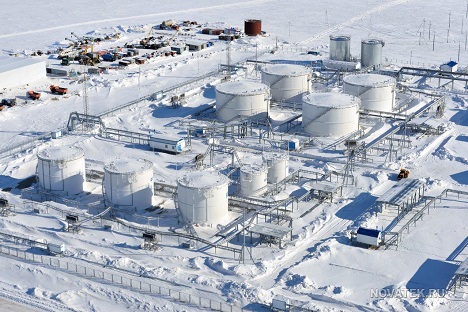 The total amount of investments required to complete the Yamal LNG has been set at $27 billion. Source: Novatek

The Novatek Company has decided to sell a 9% stake in the most promising liquefied natural gas project – the Yamal LNG. According to analysts, possible buyers are the French Total, and Chinese CNPC, and possibly other companies from Japan, India and South Korea.

Russia’s largest privately owned gas producer, the Novatek Company, expects to sell 9% in the most promising project for liquefied natural gas – the Yamal LNG. According to Leonid Michelson, head and co-owner of Novatek, the company is in talks with potential investors, but “to announce who the potential customers are, without their consent, would not be proper”. The company plans to complete negotiations by mid-2015, according to the Russian business newspaper Kommersant.

Currently, shareholders of the Yamal LNG project, in addition to the Novatek Company (60%), are the French Total (20%) and Chinese CNPC (20%). The project calls for the building, by 2017, of an LNG plant with capacity of 16.5 million tons. Given that France’s Total and China’s CNPC paid $425 million and $468 million for their packages, respectively – the 9% stake in the project is likely to fetch between $190 and $210 million.

The total amount of investments required to complete the Yamal LNG has been set at $27 billion, of which $10 billion has already been arranged. In 2015, the investment has to be around $5 billion, and according to analysts, the sale of shares is one way to solve the liquidity problem.

“The sale of this stake could very well mean that the company finds it impossible to attract other sources of funding,” said Ilya Balakirev, analyst at UFS IC. At the beginning of 2014, Leonid Michelson said that negotiations were underway with potential buyers from India, South Korea, Japan, and “countries that already had partners”, like France and China.

In January 2015, the company received 150 billion rubles ($3 billion) from the National Welfare Fund – the Russian repository of oil and gas disbursements, and thus did not need to search for an investor. Now, however, this idea has to be revisited.

According to Kommersant, additional funding for the project was to be provided by French and Chinese banks, but because of the sanctions imposed against Russia, they decided against providing the credit.

“If it were not for the sanctions, there would be no problem with the issue of funding,” said Patrick Puyang, head of Total, at a press conference. According to him, the shareholders are expecting to receive $10-15 billion in loans from Chinese banks, and another $3.3 billion should be invested into the project in 2015 by shareholders.

“This project still looks promising, and we believe that the potential problems of Gazprom in Europe may well enhance its attractiveness,” said Balakirev. According to him, LNG is much more flexible, in terms of delivery, than gas pipelines.

According to Dmitry Baranov, leading expert at Finam Management, the LNG sector in Russia is still in its infancy, so the companies involved in the first such projects will not only grab a large market share, but also make significant profits. The decision to attract investors is quite logical.

“Given the great assortment of applicants, it is hard to predict which company will buy the package. It is also possible that it will be divided into smaller packages, and thus the number of shareholders in the project will increase,” he said.

According to Balakirev, “a large number of Asian investors – from Japan, South Korea, China, and even India – have expressed interest in purchasing this package, since the Southeast Asian countries offer the most promising markets for LNG.”

However, Balakirev noted that owning a minority package would not ensure any special advantages to the buyer, in terms of supply conditions, but does allow access to additional information in the course of the project, management decisions, and so on. Therefore, in theory, CNPC could well buy such a package, to increase its total share, or so could some other investors from South-East Asia, he added.