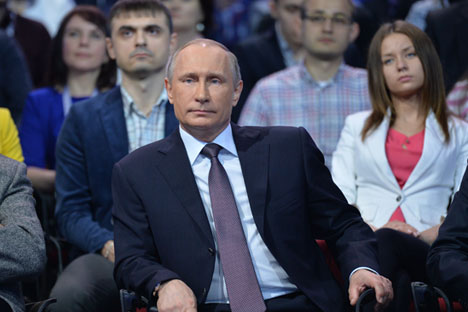 It is already understandable that there was no and there will be no collapse, Putin said at a media forum of the All-Russian Popular Front.

The Russian economy will get adapted to new realities and stability will not be undermined, President Vladimir Putin said on Tuesday.

According to experts, Russian companies have passed the peak of foreign debt payments, Putin said at a media forum of the All-Russian Popular Front.

"This does not mean that now everything will immediately start to improve. Perhaps, we may even experience what occurred late last year and early this year. We’ll feel this during this year and this will still affect some performance indicators," Putin said.

"But in general, it is already understandable that there was no and there will be no collapse," the Russian president said.

It is now obvious for everyone that "the fundamentals of the Russian economy have strengthened" and the stability that has been achieved will not be undermined, he said.

All these factors have been a major achievement of the past few years and the Russian authorities hope both to stabilize the situation and develop further, Putin said.

The Russian president said he wouldn’t call current negative trends in the domestic economy as "a crisis." "There are just certain manifestations and certain complexities," he said.

First of all, the Russian authorities kept raising wages faster than labor productivity increased. "I believed that productivity would grow faster after all but, unfortunately, we have failed to implement this goal. But this must be done," Putin said.

Secondly, the Russian authorities would have had to adjust the exchange rate of the national currency all the same, Putin said.

The Russian monetary authorities scraped the trading band for the ruble since early this year, allowing it to depreciate against major world currencies amid a fall in world oil prices, a large capital outflow, western sanctions and negative trends in the domestic economy.

"But we can’t get away from this [the adjustment of the ruble rate in line with economic trends] because this is a systemic thing and a systemic fault occurred," the president said.

Also, the world price of oil, a major revenue earner for the Russian budget, has fallen from $100 per barrel to $50 per barrel, he said.

As a result, the Russian economy has lost $160 billion out of $500 billion it used to receive before, Putin said.

Meanwhile, Russian companies were required to repay foreign loans worth $130 billion in 2014 and $60 billion this year, Putin said.

Russian companies have already repaid the larger part of their $60 billion foreign liabilities due this year, the president said.

"We have passed the peak of payments," he said.

At the same time, the fall in world oil prices also has its limits, Putin said.

The Russian president also said "there are certain advantages" in the need to adapt to new realities.