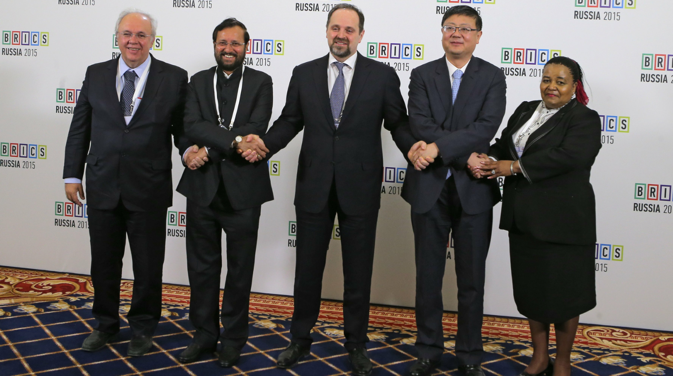 BRICS has emphasized the need for a just and fair global order based on multi-polarity and has sought urgent reform of international financial bodies. But in a first, environment ministers from Brazil, Russia, India, China and South Africa (BRICS) met to discuss the crisis of climate change.

BRICS environment ministers met in Moscow last week to deliberate on climate change. BRICS has emphasized the need for a just and fair global order based on multi-polarity and has sought urgent reform of international financial bodies. But, in a first, environment ministers from Brazil, Russia, India, China and South Africa (BRICS) met to discuss the crisis of climate change.

India’s Environment Minister Prakash Javadekar said the urgency of the situation motivated the group to explore prospects of developing a unified voice on the issue. They discussed the formation of a steering committee to place concerns of developing countries at the UN climate change conference in October 2015 in Paris.

“The success of BRICS Environment Ministers’ meeting lies in its decision to launch cooperation on environmental issues by setting up a steering committee to coordinate efforts and sharing of technologies and best practices,” Javadekar said.

BRICS countries, according to data from 2010, contribute about 40 per cent to global Green House gas emissions. At the present rate of emissions, the earth will become warmer, causing devastation in terms of rising sea levels, floods, famines, submergence of islands and coastal areas and much more.

Developing countries claim the developed countries caused most damage while they were developing and now seek to curb growth of others. They claim it is difficult to abruptly change their growth pattern, which does contribute to climate change, since they depend on non-renewable fossil fuels like coal and oil to power their growth. However, suggestions to curtail their economic growth are not acceptable and efforts are required to balance climate change with development.

Indian Prime Minister Narendra Modi articulated this when he said India (and other developing countries) cannot be forced to follow parameters on climate change set by developed countries. Climate change is a concern, which needs to be tackled in a framework of cooperation, rather than coercion.

The mainstreaming of climate change among BRICS countries will make the case of developing countries stronger at the UN climate change Conference in Paris. They could help develop a framework to fight climate change collectively. The ministers discussed proposals of mutual cooperation to tackle issues of water, air, industrial pollution, waste management and sewerage treatment. In this context, the BRICS Bank, with a $100 billion corpus, could play a constructive role, investing in promotion of green technology, and providing financial aid to help reduce air pollution.

Coordination on climate change appears likely, since four of the five BRICS countries are also members of BASIC (Brazil, South Africa, India and China). At the Copenhagen climate summit in 2009, the BASIC countries argued in unison for a common minimum position. The addition of Russia will add to the BASIC strength and will further strengthen BRICS as a key global player.

Since the NDA government assumed power in New Delhi last year, innovative programmes have been launched to raise awareness about the need to save the environment and reduce pollution. Javadekar outlined the government’s initiatives like ‘Clean India,’ ‘Fresh air, my birth right’, ‘Save Water, Save Energy’, ‘Grow More Plants’ and ‘Urban greens’ to promote community partnership to reduce pollution. Community participation, based on need-based consumption and use of less energy, could help reduce the pace of climate change. These initiatives are drawn from (Mahatma) Gandhian ideals of sustainable and eco-friendly living with minimal pressure on natural resources.

The entry of BRICS into the climate change discourse will enable a fair debate, and a fair deal, on climate change. The meeting of the ministers at Moscow was an important step in this regard.

According to Javadekar, “The first meeting of environment ministers of BRICS countries is a major initiative depicting the seriousness attached to various issues related to environment”. This seriousness of BRICS will not only promote mutual cooperation on climate change, but also influence the dominant discourse on it.