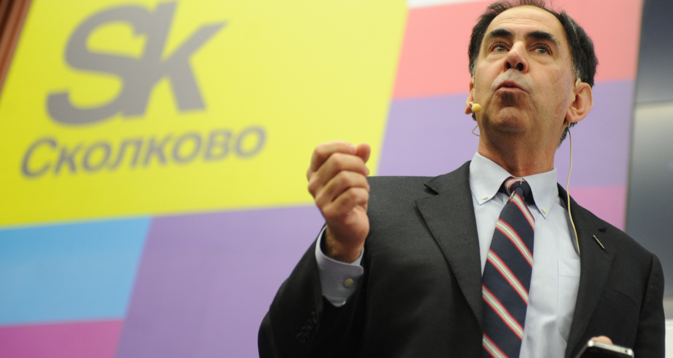 Edward F. Crawley, President, Skolkovo Institute of Science and Technology (Scoltech) speaks in an interview with RIR about the education system in Russia, focus on innovation, and plans for cooperation with Indian universities.

Has your prime target been to establish contacts with IIT-Delhi?

Indian universities likewise are trying to become more international. They have just been given a new initiative to increase their focus on innovation. This is very similar to the desires of Skoltech, which is really an innovation - based university.

What projects will this cooperation consist of?

The easiest way to get universities to start to work together is with student exchanges. Young people all over the world, either from Russia, or from India, want to see and try new things. Many Indians try to come to Moscow. The advantage of Skoltech is that our instruction is in English so they can work quite easily there. The first thing that we will do is student exchanges.

Then, there are faculty exchanges, for professors to get to know each other, identify interests in research topics that are held on both sides. We are going to sponsor a set of informal meetings where Indian professors will come to Moscow or Russian professors come to Delhi to get them to be more in contact with each other.

How many geniuses are you ready to invite from India, per year?

I like to think of all the students at Skoltech as geniuses. Indian students can be very good. In fact, we have one woman from India at Skoltech now studying Space. She is a very bright student.

We expect about 20% of the students at Skoltech to be international. Now of course, they would not all be from India. Maybe 3% or 5% of our students coming from India now would mean maybe as many as 20% or 30% by the end of the decade.

We would like to start by recruiting a small handful of very good Indian students who would be interested in coming to study in Moscow at Skoltech rather than going to Stanford or Imperial College or Cambridge. That will be challenging, but I think we can do it.

Are there were plans to establish some kind of formal association between Russian an Indian universities during the visit of the President of India to Moscow in May?

One of President Pranab Mukherjee`s wishes as part of his visit is to have stronger links between Russian and Indian universities.

Actually, the Tomsk State University is organizing this alliance of Russian and Indian universities to work together and to get to know each other better. They invited some university directors, including myself, to that meeting on May 8th. They will try to build some association.

How do you visualise such an association?

One of the most valuable things this (association) can do is exchange students and move students back and forth. I already mentioned this.

Student exchange has a lot of benefits, not the least of which is that it builds better understanding between countries. You know, I am in Moscow not by accident. I was there for the first time when I was an undergraduate student at Massachusetts Institute of Technology and came to study at Saint Petersburg.

Russian universities have a strong desire to internationalise themselves. The Russian government supports it. Attracting students from India is a strong possibility because they are really very well-educated. There are a lot of them graduating from IITs (Indian Institutes of Technology).

The other natural thing for India and Russia is to work on innovations. There will be research projects in both places. Both the countries are interested in developing more indigenous economic capability. Reasons are different, but outcome is same - to become less reliant on products from the West or manufacturing from China.

If the Indian and Russian university systems were to align themselves around this innovation agenda that it would be very highly supported by the governments.

If you compare Germany, for example, and Russia as prospective destinations for Indian medical students, Moscow is not much cheaper than Berlin. So what is the advantage of the education system in Russia?

You have asked a very complex question. So let me address pieces of it.

Firstly, Russian universities and medical schools in particular really just have to develop the capability to work in English, not by my design but by the way the world has evolved. English has become the standard language of international education and research and many Russian universities have a strong programme in place to do this.

In the first half of the 20th century scholars of science or technology went for best education to Germany. By the end of World War II, there was a new balance and people went to the United States. These things are not permanent. If the Russian universities work hard and have adequate investment over the next 10 or 20 years, their position could become significantly stronger in the world.

Already, more of the best students are being attracted to Russia. Projects like Skoltech are in some senses pilot programmes, demonstrations that this sort of success can be accomplished.

It is not only about the education system. Just compare the promotion of Western universities and Russian ones. We are losing this competition also. Russian universities can significantly improve their international marketing.

Let me outline some specific ways to improve our image.

One is that many of them still publish their scholarly treatises in Russia. When international scholars cite other scholars, they do not cite the Russians.

Secondly, they just do not travel, do not have a good contacts with the international media or networks of scholars, but they would love to have a wider international presence.

I would cite the example of ITMO (Saint Petersburg National Research University of Information Technologies, Mechanics and Optics), which was a medium-size, fairly specialised technical institute not long ago. Now it has conducted a strong branding exercise, increased its international profile and redefined programmes, becoming an internationally known brand.

What is so special about Scoltech, besides the instruction in English?

There are really three distinctive features of Skoltech. English language is just one of them.

Another is that it is a truly international place from the very beginning. It is a global university in Moscow. It is not a coincidence that we are visiting Mumbai, Bangalore and Delhi. It is part of the agenda of Skoltech to create an international network of four other Russian universities, to have them recognised, to have a better international presence within Russia. It is explicitly a part of our agenda to reach out to other universities around the world and, because I am an international scholar scientist, it is relatively easy for me to take on this role.

Skoltech is really not a university. It is different, an innovation institute. It does not have the word university in its name. It is an Institute of science and technology. The main reason to establish Skoltech was not to build the 501st university in Russia, but the first innovation institute where we would bring together science and technology with business and innovation. That is the purpose of Skoltech. That is our design intent.

Which decision are you proud of during your time at Scoltech?

The major decision was to come into Skoltech. First, I had to be convinced that I should go there and then I had to convince my wife.

I went to Moscow, visited Scoltech, and met those heading the Skolkovo project. Then I had to talk to my wife Karen. I took her to dinner and said, "So Karen, what do you think about me going to Skoltech?” She looked at me and said, “You have to take this job.” “You are never happier than when you are starting things. You have a deep commitment to education and you have always loved Russia. What better job could there be in the world for you than starting a new university in Russia.”

The Skolkovo Institute of Science and Technology (Skoltech) is a private graduate research university in Skolkovo, a suburb of Moscow. It was established in 2011 in collaboration with MIT with the aim of “educating global leaders in innovation, advancing scientific knowledge, and fostering new technologies to address critical issues facing Russia and the world”.

The Skolkovo Foundation is a non-profit organization founded in September 2010 by the Russian government to “accelerate Russia’s transformation from a resource-intensive to an innovation-based economy”. To achieve this objective, the Foundation is overseeing the creation of the Skolkovo Innovation Centre, comprising more than 1,000 high-tech startups, a Skolkovo Technopark, the Skolkovo Institute of Technology (Skoltech) and Skolkovo city, located near Moscow.

The cumulative revenue of Skolkovo’s startups through December 2014 reached $1 billion. They brought in more than $220 million in investment, creating 13,500 jobs and filing over 1,300 patent applications along the way. By 2020 over 2 million square meters of residential and office space will be built in Skolkovo with 35,000 people working daily in the Innovation Centre.