Russian software helps global companies to spy on their employees 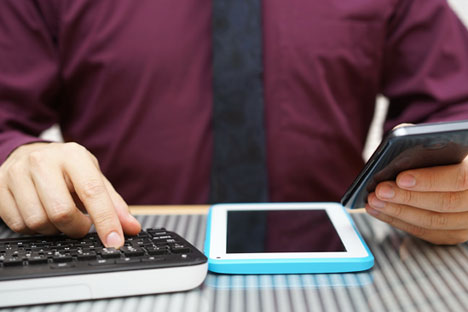 CrocoTime is installed on the client company’s server and comes with so-called “monitoring agents” that access employees’ computers. Source: Shutterstock

Software developer Infomaximum is going global with its employee-monitoring program CrocoTime. Already quite popular in Russia, CrocoTime is designed for big companies and is capable of monitoring up to 10,000 users simultaneously.

With 20,000 employees already under its watchful eye, CrocoTime is quite popular with some of Russia’s biggest companies, including global energy giant Gazprom, leading financer Tinkoff Bank, as well as the local branch of Danish shoe retailer Ecco. But what is so special about the program?

Agents? On my computer?

CrocoTime is installed on the client company’s server and comes with so-called “monitoring agents” that access employees’ computers. The software tracks websites that are visited and programs that are used, and sorts all activity into three categories: productive, unproductive and incidental. It is, of course, up to the client to decide what is good or bad for their employees.

“Incidental activity is something that stands apart,” says Alexander Bochkin, CEO of Infomaximum. “Basically, this is when an employee uses tools that he is not supposed to use, going beyond his direct responsibilities. Such activity shows the company has some management issues. For instance, one of the companies we worked with found out their client relations managers spent about 60 percent of their time working in Microsoft Word, drafting contracts manually. After having detected that the department switched to using document templates.”

CrocoTime also has the ability to track idleness: if someone’s keyboard and mouse do not get used for some time, the software considers the employee as absent. A perpetual license for a “monitoring agent” is currently priced at 2,560 rubles ($47.80) per employee computer. According to Bochkin, due to his software most companies reduce the amount of wasted time from 25-30 percent to 5-7 percent.

Not the only one

CrocoTime is not the only employee monitoring software available on the Russian market. Other products include Distsiplina, OfisMETRIKA, Stakhanovite and YawareOnline – all possessing similar capabilities, including tracking website activity and calculating hours worked. “CrocoTime falls somewhere higher than the middle of the price range and is designed for larger companies,” Bochkin says.

However, developers claim that CrocoTime has several advantages over other companies. Firstly, the program can track the activity of up to 10,000 users simultaneously. Secondly, it generates statistics not only for each employee, but also for each subdivision of the company for a specified period of time, whether it is a week, a month or a year. Lastly, it includes automatic settings for certain departments such as accounting or IT.

We still have tablets

According to Bochkin, Infomaximum seeks to promote Crocotime in Europe, North America and Asia. However, Sergei Akashkin, an investment analyst for Prostor Capital, believes demand for the program both abroad and in Russia will be limited.

“CrocoTime might be of interest for larger enterprises,” Akashkin says. “The need for an employee monitoring solution arises in companies employing more than 50 people. But in smaller companies a good manager can make do without any software.”

Moreover, Akashkin believes that the productivity of employees generally depends on the time of day and this factor can influence the accuracy of the data collected by the software and in turn have an impact on the demand and sales growth. Besides, he adds, employees have recently started to circumvent monitoring attempts by using tablets and smartphones to surf the internet while at work. Most managers understand that and do not see the use in installing monitoring software, instead relying on simple task management programs.