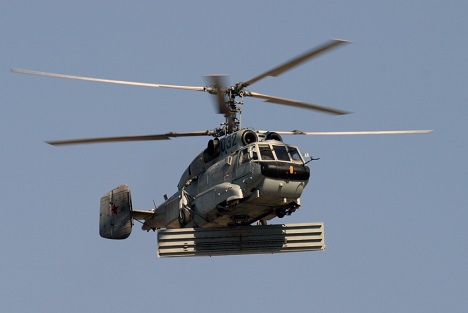 Russian Helicopters Holding Company has delivered the first batch of two refurbished Ka-31 helicopters to India. The Ka-31, an airborne early warning helicopter, is designed for radar surveillance of air and water spaces, the early detection of surface ships and low-flying targets at long distances (cruise missiles, helicopters and aircraft).

The Russian Helicopters Holding Company, part of the Rostec State Corporation, has delivered the first batch of refurbished Ka-31 helicopters to India, manufactured by the Kumertauskoye Aviation Production Enterprise (KumAPP).

In 2004, KumAPP delivered nine Ka-31 helicopters to India. Six of these machines required refurbishing before their first scheduled overhaul, for which they were sent back to Kumertau for capital repairs. The first two of these have now been returned to India for further use. The remaining machines will be sent shortly.

A total of 14 Ka-31 helicopters were manufactured for India. To service these machines, a special base was built in the state of Goa. Every year, experts from KumAPP come to India to service these helicopters.

The Ka-31 is designed for radar surveillance of air and water spaces, the early detection of surface ships and low-flying targets at long distances (cruise missiles, helicopters and airplanes). The special equipment allows the helicopter to identify the detected targets, define the parameters and coordinates of their movement, and transmit this information to ships and command centres of the ground forces.

This airborne early warning (AEW) helicopter has been developed on the base of the ship-based Ka-29 transport and attack helicopter. It can be placed on ships and on coastal airfields. The Ka-31 can also be used as air defence for ground troops.

The Indian military has found the Ka-31 highly useful, for its ability to detect and track a large number of targets. The base of the Ka-31’s onboard avionics system is the powerful radar, which provides an omni-directional view, with a rotating antenna that is extended in flight.

KumAPP OJSC, a subsidiary of Russian Helicopters OJSC, is the largest industrial enterprise in Kumertau, producing high-tech helicopters and special equipment. KumAPP OJSC specializes in the manufacture of coaxial-rotor helicopters. It produces all types of helicopters for the Russian Navy – the Ka-27 and Ka-31 families, the Ka-32A11BC civil multipurpose helicopter and the light Ka-226 and Ka-226T helicopters.

Russian Helicopters OJSC (part of the Rostec State Corporation) is a world leader in the helicopter-manufacturing sector, and the only developer and manufacturer of helicopters in Russia. The holding was established in 2007, with its head office located in Moscow. The holding comprises five helicopter plants, two design bureaus, enterprises for the production and maintenance of components, an aircraft repair plant and a service company that provides after-sales support in Russia and abroad.

Among the company’s clients are the Russian Ministry of Defence, the Russian Interior Ministry, the Russian Emergencies Ministry and other government customers, the airlines Gazprom Air and UTair, as well as major Russian and foreign companies. In 2014, the revenue of Russian Helicopters, using IFRS, grew by 22.8%, and amounted to 169.8 billion rubles. They produced 271 helicopters last year.

The Rostec State Corporation was established in 2007 to promote the development, production, and export of high-tech industrial products for civilian and military use. It includes about 700 organizations, which are currently formed into nine holding companies in the military-industrial sector, and five holdings in civilian sectors. Rostec complexes are located in 60 Russian constituent entities and deliver products to more than 70 countries.