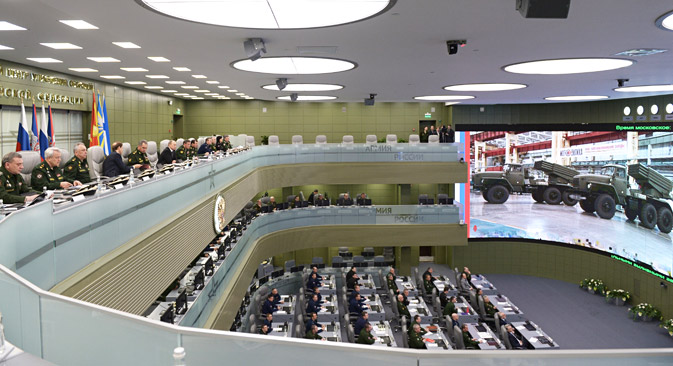 ‘Hybrid’ warfare, a military strategy that combines conventional warfare, irregular warfare including use of weapons of mass destruction, and cyber and information warfare is a leading form of international conflict today. The General Staff of the Russian armed forces accused the United States of conducting such war against Russia. RIR found out the meaning of “hybrid wars” and whether Russia can counter them.

The term “hybrid threat” incorporates a wide range of hostile circumstances and intentions, Alexander Bartosh, director of the Information Centre for International Security at Moscow State Linguistic University, said in an address at a round table (RT) on “Hybrid wars of the XXI century.” The RT was held in the Military University in January 2015 with the participation of representatives of law enforcement agencies and other departments.

Hybrid warfare is a military strategy that combines conventional warfare, irregular warfare and cyber warfare. Hybrid warfare is also used to describe attacks by nuclear, biological and chemical weapons, improvised explosive devices (IEDs) and information warfare. It is being viewed as a complex, potent variation of warfare.

The Russian military has long been worried about the new, amorphous type of threat. The arrival of Sergey Shoigu as the head of the Ministry of Defence has seen this new form of warfare receive serious attention. The ministry is developing a comprehensive programme to counter such threats.

In mid-October 2014, the Ministry began to publicize Shoigu’s views about a possible conflict with NATO and the external threats.

“In today's world, there is not a single seat of tension without the presence of the US military. Additionally, upon completion of the ‘democracy-bringing missions,’ such regions plunge into actual bloody chaos, like Iraq, Libya, Afghanistan, and now Syria, to name a few. Open mentoring of the Task Force representatives of the US Army Central Command is even behind the tragic events in Ukraine,” he opined.

In an attempt to seize the initiative, the United States and NATO rush to accuse Russia of conducting a hybrid war in Ukraine and Crimea.

Alexander Vershbow, deputy head of NATO, while speaking at the Inter-Parliamentary Conference of EU countries for the Common Foreign and Security Policy, said NATO was prepared for “hybrid war” with Russia. According to Vershbow, speaking on March 5, 2015 in Riga, the response of NATO and the EU to such threats should include complementary “hard and soft” instruments of struggle.

A hybrid war could begin with use of an information attack, which can last 5-10 years. At this stage, opposition power is being created in the ‘attacked’ country among the youth with western - oriented values. Then, external pressure is used through economic instruments. The ground is thus prepared for “colour” revolutions and regime change. As a rule, the use of military methods is minimal or carried out in the form of remote attacks without ground forces.

Developing this new strategy of warfare is a new milestone, with the strategy of war developed by politicians and economists instead of the military. The country that uses a hybrid war, carries minimal losses, and eventually ceases to bear the financial costs, shifting them on to the attacked country, while preserving the life of its proper soldiers, thus avoiding social protests, such as during the Vietnam War.

"If we consider three aspects of conducting a hybrid war: economic, informational and military; Russia is ready to face two of them”, retired Colonel Mikhail Timoshenko, an independent military analyst, told RIR.

“It's difficult to suppress us economically because of our vast experience of survival in the Soviet period, when the blockade was many times stronger. Militarily, Russia has also adapted to modern conditions and is capable of dealing with the situation in local areas along the border. The nuclear shield and the modern systems of delivery of warheads remain effective. The weak link in a hybrid war is the information support,” Timoshenko said. “We inherited this baggage from the Soviet Union. Additionally, there is the language barrier. The whole world speaks English, and less and less countries speak Russian. In view of the growth of the role of social networks the West, represented by NATO, has an obvious advantage. But since the information field often depends on the economic one, the security of Russia will depend on the success of our economic development,” Timoshenko said.

One of the key tools to combat hybrid warfare in Russia is the National Defence Management Centre (NDMC), established in 2014. It is a new system to monitor, comprehensively analyse and efficiently respond to all possible threats to national security. In case of a military threat, the country's leadership, including the various branches of the government will be able to coordinate their work with the military and other security services inside the NDMC building. Previously, this kind of coordinated operation was not an option.

The NDMC software allows for simulation of likely scenarios and development of options to resolve any critical situations, and determine whether or not they represent a threat to Russia.