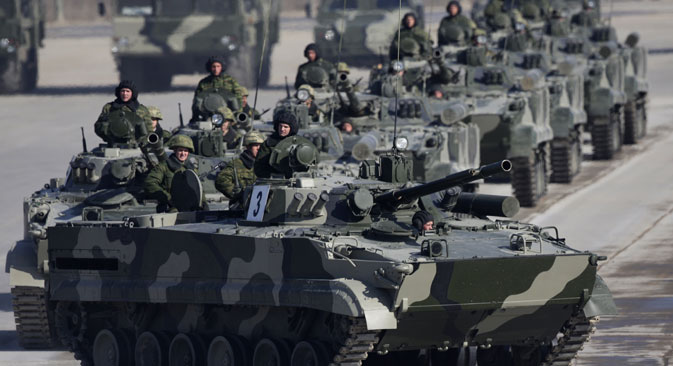 The electric transmission will be tested in the BMP-3 fighting vehicle. Source: Anton Denisov / RIA Novosti

Infantry fighting vehicles with electric transmission will not be easily detected with a thermal imager.

Russia’s Concern Tractor Plants (CTP) will present by the end of the year a prototype of electric transmission for infantry fighting vehicles (IFV) that will make armored vehicles invisible to the enemy’s thermal scopes, the concern’s Vice President and co-owner Albert Bakov told TASS on Wednesday.

He said that the current IFV engines are heating strongly, so the vehicles can easily be detected with a thermal imager. IFV models with electric transmission will be less visible to such systems, he said.

"The fighting vehicles are eventually equipped with systems, which require more power. And if there is a need for a powerful generator, then the sound idea to make electric transmission for the vehicle has emerged," Bakov said.

"We are working on this, and I think we’ll come up with a prototype of such transmission by the year end," Bakov said.

According to him, the electric transmission will be tested in the BMP-3 fighting vehicle. "We have already made an electric-driven combine harvester and, having tested this system on it, we will try to install this engine on the existing BMP-3 hull," he said.

The Concern Tractor Plants Manufacturing Group is Russia’s largest producer of facilities and spare parts for light and heavy engineering and off-road machinery. The holding company’s products are used in key industries within Russia and the Commonwealth of Independent States (CIS), as well as on a worldwide basis.