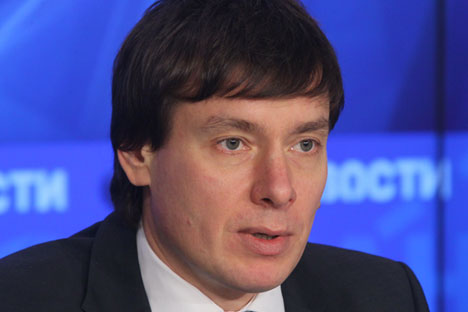 "We hope that sanctions will be lifted [from Iran], than regular trade and regular cooperation will resume," the Eurasian Economic Commission (EEC) trade minister said.

"Iran is our key partner in the Middle East, and the prospects of lifting international sanctions is now more real than ever," Slepnev said. "In this respect, our long-term expectation of development of economic ties with Iran and expectation of its economic growth, is definitely a serious ground for an agreement on free trade between EEC and this country," he added.

"We hope that sanctions will be lifted [from Iran], than regular trade and regular cooperation will resume," the minister stressed. "Of course, we, together with the union [EAEU], want to hold a serious position on Iranian market," Slepnev said, adding that Iranian partners have "similar expectations from cooperation with the Eurasian [Economic] Union as its key priority partner."

"Talking about our joint projects and ideas, including with regional associations, in the context of the initiative [of free trade zone agreement] between Eurasian Union and China, Iran is also considered in this context, and we also need to develop a common vision on this great project," he noted.

"We understand those peculiarities that exist in Iran in trade regulations, and we count on experience and ideas of our Armenian colleagues, [Iran’s] neighbors," Slepnev stressed.

The EEU is an international integration economic union, which was established on January 1, 2015. It comprises Russia, Belarus, Kazakhstan and Armenia. Kyrgyzstan is expected to join the union later this year.