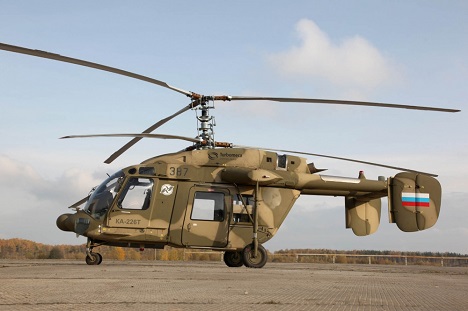 Up to 400 ‘Kamov’ helicopters could soon be manufactured in India through a joint venture company owned by Rosoboronexport, Russian Helicopters, and Hindustan Aeronautics Limited, including some for export to third countries.

The Ka-226T ‘Kamov’ helicopters could soon be manufactured in India through a joint-venture enterprise owned by Rosoboronexport, Russian Helicopters, and Hindustan Aeronautics Limited (HAL), RIR learned from an Indian military source, who wished to remain anonymous.

“We are talking here about the production of at least 400 helicopters over the next 10 years, including some for export to third countries,” he said.

The source declined to specify the cost per manufactured aircraft, saying “this will be determined when the final agreement is reached”.

According to the PTI News Agency, the Indian government’s Defence Acquisition Council (DAC) gave an initial clearance for around 200 helicopters, and state-run HAL is a "front-runner" for partnering with Russia.

"HAL is the front-runner as of now. Talks would be held now to finalize the contract and work out the modalities," the military source said.

The light multipurpose Ka-226T helicopter is equipped with two Arrius 2G1 engines made by the Turbomeca Company. The passenger version of this aircraft can carry up to seven people, while the transport version can carry one ton of cargo inside the fuselage or via an external sling. For transportation of oversized cargo, a high-capacity cargo platform can be installed instead of the regular transport cabin. This aircraft is scheduled to replace the Cheetah and Chetak helicopters currently being used by the Indian Army. Media reports also said the helicopters would be manufactured in India under 100 per cent transfer of technology.

Sources also said that the Indian Navy's plan to procure over 100 Naval Utility Helicopters is on track and is a separate process for which the Request for Proposal is in the last stage of finalization.

India has a fleet of Kamov Ka-28 anti-submarine warfare (ASW) helicopters and Ka-31 radar picket helicopters, but many of the former are in need of an upgrade.

The INS Vikramaditya carries 6 Ka-28s and Ka-31s. When the aircraft carrier was handed over to the Indian Navy in November 2013, Russian Deputy Prime Minister Dmitry Rogozin first suggested that the two countries consider the possibility of setting up a joint venture to assemble Kamov helicopters in India.

“Upon request from the Indian Navy, we are ready to supply jointly with Russian Helicopters the necessary number of seaborne helicopters and offer the latest technology to the Indian side, including the Ka-52K helicopters,” Mikheyev said.