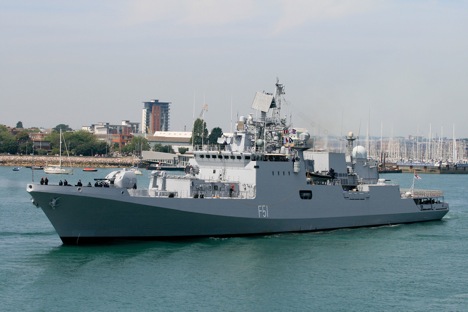 The Indian government has expressed interest in jointly building frigates with Russia, with the proviso that they be built in India. The Indian Prime Minister has laid emphasis on increasingly producing defence equipment in India, under the government’s ‘Make in India’ programme, with joint collaboration.

The Indian government has expressed interest in jointly building frigates with Russia, under Project 11356, in India, Oleg Shumakov, CEO of the Baltic Shipyard ‘Yantar’ said in an interview to RIA Novosti .

Russia has supplied six frigates to India between 2003 and 2013, under Project 11356, all of which were built by the ‘Baltic Plant’ in St. Petersburg and the Kaliningrad factory ‘Yantar’. The first three ships carry the Russian cruise missile system “Club-N” on board, while the other three frigates are armed with cruise missile “Brahmos,” jointly produced by Russia and India.

“Having completed a series of three Indian orders, we were hoping that India would extend their cooperation with us, especially since the Indian Defence Ministry mentioned that their Navy needed another three or four ships of this class. Now they are planning to produce such ships at home, of course, with our participation and under our patronage,” Shumakov said.

Shumakov said the frigates to be built in India would be armed with more sophisticated weapons than the ones carried by the existing ships of the project.

“We tend to think that it will be the ship of the same class, but with somewhat different arms, as the technical capabilities of weapons are constantly evolving, so I think there will be something new to mount on this ship. At the same time, in terms of seaworthiness, the ship will be absolutely the same. We are currently consulting with our Indian counterparts on these issues,” the General Director of ‘Yantar’ said.

Patrol ships under project 11356 are designed for combat operations against surface ships and submarines, for meeting the air attacks, both autonomously and as part of formation. They carry universal missile and artillery weapons and modern radar facilities for anti-submarine and air defence.

Ships of this series have a displacement of about 4 thousand tons, they are 125 meters in length, with speeds of up to 30 knots and can carry a crew of 180 people.