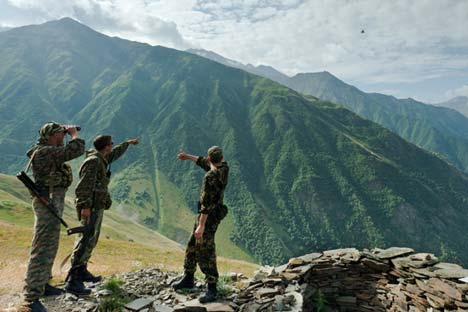 Border troops have remained faithful to their duty, not only in times of peace, but also in the most difficult times. Source: RIA Novosti / Ruslan Vahaev

Border Guards Day is celebrated on May 28 in the Russian Federation. It is a holiday for the men in green caps, who are tasked with guarding over 20,000 kilometres of borders with more than 15 countries. This holiday dates back to 1918; the day the Council of People’s Commissars adopted a decree establishing the Border Guard Service of the RSFSR.

More than 15 countries share a border with Russia, the largest number for any nation in the world. The situation along many of these border areas is not always peaceful, making it important that the border lines, which stretch across land, water and air, to be well guarded by vigilant guards.

Border guards are the first line of defence for the country. More than 11,000 border units, including dozens of crews on boats, ships, helicopters and aircraft work daily to ensure that the borders are protected.

Border troops: from past to present

Border troops have remained faithful to their duty, not only in times of peace, but also in the most difficult times.

According to the Barbarossa Plan, for example, Hitler allocated only 30 minutes to seize the border posts of the USSR. Border outposts held out from between one hour to 30 days, in the case of the garrison of the Brest Fortress.

Along the border with the Republic of Tajikistan, on July 13, 1993, guards of the 12th Border Outpost of Moscow held back an attack by 250 Afghan and Tajik militants, for 11 long hours. Of the 48 guards there, 25 lost their lives, but remained in place and protected their homeland.

The new Russian Border Guard Service is a structural unit of the Federal Security Service, and directly reports to its chief.

Each border region poses its own set of threats to the Russian border services. The north-west of the country, for example, has to deal with smuggling of products, which could jeopardise the country’s economic interests, while the southern areas are face a high level of threats from terrorist groups, drug traffickers and the destruction of biological resources of the Caspian Sea.

The problems on the borders with Central Asian states are almost all of the same character, to which is added illegal migration. The Far Eastern border remains the most problematic, in terms of potential for damage to the country, in ways that impact the country’s economic, biological and raw materials sectors.

Despite a wide variety of technological tools now available to assist border guards to maintain vigil while exercising their professional duties, boundary demarcations like frontier markings, control strips, engineering facilities with barbed wire and canine border-patrol units remain in place. However, as always, the most important role is played by individual guards, who thwart attempts by cunning violators, and not allow them a chance to break through the country’s defences.

Criminals can be very resourceful when it comes to confusing border guards; they walk backwards, carry each other, attach footprints of animals to the soles of their shoes, and even crawl over the ground.

Meanwhile, units of the Russian Border Guard Service also do not stand still. They are constantly equipped with modern, upgraded technology, which can significantly enhance their ability to protect the borders. Automated technical control of the situation on the border can improve vigilance and control especially in areas where human access is complicated by natural factors, for example, in the Caucasus Mountains. The means of communication are also being improved.

Maritime border forces now are also better equipped, with new ships. To protect Russian interests in the Arctic, a first level border-patrol ship; the Polyarnaya Zvyezda (Polar Star); was launched into service a year ago.

Networks of engineering structures are being rebuilt along borders with problem areas, such as the Far East, which have suffered from unprecedented natural disasters in 2013. However, much still remains to be done. Around 60% of the land and sea border sections are equipped with modern technical facilities, and about 85% of the international traffic routes.

Nevertheless, border posts, which were gloomy places with a single booth and barbed wire stretched along the border, have now turned into neat walled-towns which, in case of an emergency, would be able to thwart any onslaught by an aggressor, for a long time.