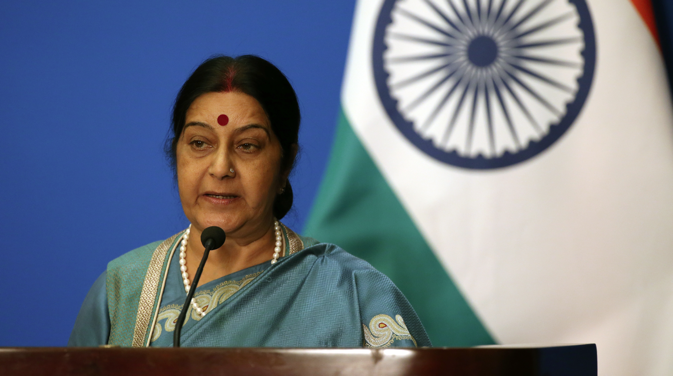 Sushma Swaraj: “Russia and India these ties are based on mutual trust”. Source: EPA

India and Russia were moving away from a mere buyer-seller relationship in the defence hardware segment, and moving increasingly towards co-production of defence hardware, India’s external affairs minister Sushma Swaraj said.

Russia and India are increasingly moving towards joint-production of military equipment, and away from a typical buyer-seller relationship, indicating a significant level of improvement and mutual trust in bilateral relation, Sushma Swaraj, India’s Minister of External Affairs said. She was speaking at a press conference on Sunday highlighting the foreign policy achievements of the Narendra Modi government’s first year in office.

“Our military-technical cooperation with Russia was based on a ‘buyer-seller’ relationship – they sold arms, and we bought them,” she said. “But this (cooperation) has now changed. Russia has decided to produce weapons in India, as well as to jointly manufacture arms with us, transferring the corresponding technologies.”

India has been increasingly seeking co-production of defence equipment and transfer of technology, including sophisticated technologies like building fighter jets, submarines, missiles and tanks, as part of the government’s ‘Make in India’ initiative. The defence sector is a major area in which the government hopes to make a success of manufacturing in the ‘Make in India’ programme.

Talking about bilateral relations in general, Ms. Swaraj said that between “Russia and India these ties are based on mutual trust”. “Russia is our time-tested friend,” Swaraj added.

She was reiterating the view of successive Indian governments towards Russia since the beginning of this century, particularly, when the relationship was upgraded to the status of a strategic partnership (in 2000) and subsequently to a “Special and Privileged Strategic Partnership,” in 2010.

Before and during his recent visit to Moscow, Indian President Pranab Mukherjee also spoke glowingly about Russia being India’s “time-tested friend,” which always firmly stood by India.

In 1998, Russia and India jointly manufactured a supersonic cruise missile, BrahMos, (named after the rivers Brahmaputra and Moskva), which has been inducted into the Indian armed forces.

India and Russia are currently engaged in negotiations to set up a joint-venture for the production of Ka-226T multi-purpose helicopters. Both India and Russia are also planning to subsequently export the co-produced BrahMos and Ka-226T to third countries.

Negotiations are on to explore the possibility of jointly building multi-role fighter jets, (possibly the Su 35 MKI) needed by the Indian Air Force (IAF), in India. India recently bought 36 Rafale fighter aircraft from France, out of an original list of 126.

India’s Defence Minister Manohar Parikkar said last week that the IAF did not need 126 aircraft, and indicated that, after the 36 Rafale aircraft, the IAF’s needs would be met with foreign collaboration, but made in India.

Joint manufacture and co-production of military hardware has been an ongoing feature of bilateral relations, over several decades.

The Modi government has opened up the defence sector to foreign direct investment, with a 49 per cent cap, which allows private and foreign investment into its defence manufacturing sector. It is encouraging large private Indian companies, and some foreign ones, to set up base in this country and manufacture defence equipment jointly.

India has been one of the world’s largest buyers of military hardware over the past decade and would like to begin some “import substitution.” The bulk of India’s military hardware in the past came from the USSR and, when the Soviet Union broke up, the bilateral relationship developed a few wrinkles, with problems particularly relating to defence spares and timely delivery of equipment, cost overruns and so on. However, since the turn of the century, the relationship appears back on track, a senior official said, and “the problems between old friends” has been largely sorted out.

“The level of trust between both countries is very high,” the official said.

Negotiations are now on, an official source told RIR, to jointly manufacture hardware in India and then export the equipment, including the iconic BrahMos missile, to third countries once domestic needs are met. Vietnam is among the countries that have expressed a desire to buy the BrahMos, the source said.