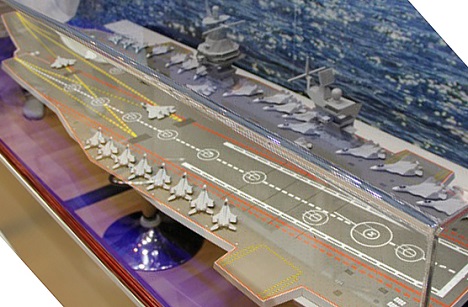 The promising aircraft carrier might cost from $1.8 billion to $5.63 billion at the current ruble/dollar exchange rate.

Russia’s defense and industrial sector is developing a promising aircraft carrier for the Navy worth up to $5.6 billion, which has no analogs in the world, Northern Fleet Commander, Admiral Vladimir Korolyov said on Monday.

The new aircraft carrier will enable the Russian Navy to operate more effectively, the admiral said, referring to the developments by the Krylov Research State Center in St. Petersburg but gave no estimates for the new ship.

The center’s developments are known under the codename Project 23000E Storm.

"Considering that the Northern Fleet forces perform a great variety of missions in the distant Oceanic zone, the presence of an aircraft carrier in the fleet in the future will help address these tasks more effectively," the admiral said.

‘In a perspective, however, we should have a full-fledged aircraft carrier complex in our fleet surpassing world analogs by its characteristics. This is required by new challenges and threats emerging in the world," the admiral said.

"If we speak about what kind of an aircraft carrier the fleet needs, this should be a ship corresponding to the requirements of tomorrow rather than of today," the Northern Fleet commander said.

Its development will take about ten years. However, there are no technical specifications for a ship of this class so far, Vlasov said.

Nevertheless, aircraft carriers have been included in Russia’s shipbuilding program until 2050.

The Nevskoye Design Bureau, which is Russia’s sole aircraft carrier designer, is carrying out preparatory works on this project.