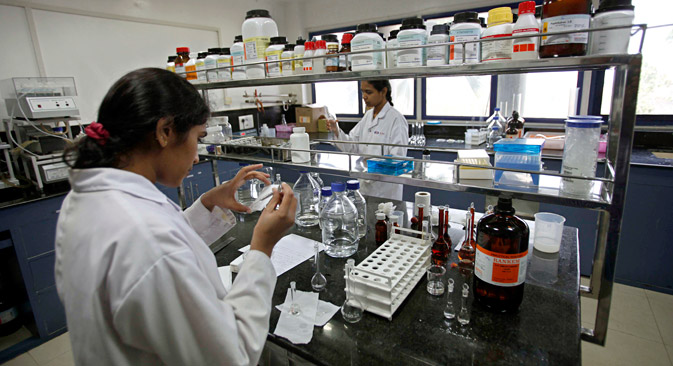 Russia-India pharmaceutical cooperation traditionally receives a lot of attention at the highest levels. However, in crisis conditions, companies have had to develop their own survival strategies in which competitiveness and innovation take first place. Some amendments in Russia will test the Indian pharmaceutical sector.

India accounts for around 2.4% of the global pharmaceutical industry in terms of value and about 10% in real terms. India already exports 20% of the world’s entire generic medicines.

According to McKinsey & Company estimates, the pharmaceutical market in India will grow by 12.1% from 2012 to 2020, to reach $45 billion. PWC estimates that potential growth in the pharmaceutical industry in India by 2020 will reach $74 billion, with an average annual growth of 15-20%. Large-scale government support for export-oriented manufacturers as part of the "Make in India" program is aimed at doubling the manufactured volumes of medicines and compounds in the country by 2020.

The generic medicines sector (medicines that are manufactured to similar patents or using original chemical formulas and released in the market after the patent has expired), where India has traditionally been very strong, is growing particularly quickly.

This sector will reach $26.1 billion as early as 2016, analysts predict, although the generic sector was valued at $11.3 billion just five years ago.

According to data from RNC Pharma, an analytical company, the import volume of medications to Russia in the first quarter of 2015 rose four percent in monetary value.

In contrast, the physical volumes for the previous period significantly dropped by 9%. According to data from FTS, between January and November 2014, import of pharmaceutical products to Russia from abroad reduced by 12.1%.

India provides antibiotics, hepatitis vaccines, medication for intestinal infections and anti mycotics to the Russian market. There are currently more than 800 Indian medications certified in Russia. If in 2010 Russian imports of pharmaceuticals from India comprised more than 30% of the total volume ($553.1 million as of 2010 prices), then in 2014 this volume dropped to 25%.

Analysts note that the share of Indian products in the Russian market traditionally makes up no more than 3%. In the sales structure of Indian products, prescription medications dominate. Indian manufactured branded generics on the pharmaceutical market, according to different sources, make up about 9% of the sector, and non-branded generics make up less than a percent.

The implementation of the Russian development strategy for the pharmaceutical industry Pharma 2020, means the active development of local generic companies which compete in terms of quality and price with the products from Indian companies.

Establishing a unified customs territory within which pharmaceutical products can be handled without paying customs duties, according to Nikolay Bespalov, development director at analytical company RNC Pharma, is one of the reasons for the lack of noticeable growth in the share of Indian companies in the Russian market. The Pharma 2020 strategy will, he said, open opportunities for Indian companies to expand their presence on the market due to product localization.

Indian company reports for the 2015 financial year show a drop in profits in Russian market and CIS countries, connected to fluctuations in the exchange rate. In rubles, companies’ incomes show a positive trend.

According to the last report from Dr.Reddy's pharma at the end of the last financial year, company revenues in Russia dropped 9% in dollars despite a rise of 30% in rubles. Ranbaxy Laboratories, Glenmark Pharmaceuticals and others also saw a drop in sales in the Russian and CIS market.

“Everyone is expecting the ruble to stabilize at some sort of acceptable level. Meanwhile, companies are obliged to sell their products at the same prices, significantly reducing their margins and exchanges being run at a loss, since the government is not looking at altering the prices for contracts, which have previously been signed”, a representative of an Indian pharmaceutical company said, not wanting to be named.

Manish Singhal, head of the Indian Dimaz Group, which also includes a logistics operator, admits that the volume Indian products supplied to Russia has declined by more than 50% since the end of 2014, when the ruble began to weaken against international currencies.

Sushil Kumra, head of the Russian representative office of one of the largest Indian manufacturers, operating in Russia for the past 15 years, Lupin Ltd., said most Indian companies have suffered from the weakening of the ruble against the dollar, as all settlements between Indian producers and Russian partners are now conducted in US dollars.

“Except for a few companies that produce generic drugs, the majority of Indian companies are involved in sales through the pharmaceutical benefits program (PBP) and hospital tenders, supplying medicines found on the list of vital and essential drugs, whose prices are regulated by the state. Until 2010, foreign producers had the right to index their prices, starting in 2010, they lost this privilege. Prices were re-registered in rubles and have not been revised since then,” Kumra complained. “The situation is critical, but those companies that have a long-term development strategy for the Russian market, will be able to cope with it, so as not to lose this market.”

However, Kumra noted that in 2016, in the public procurement sector, they may introduce restrictions on the access of foreign goods in the presence of 2 or more similar products already being produced in Russia, Belarus and Kazakhstan (the so called “three’s a crowd” decision), which will become another challenge for Indian players. Russian analysts agree, noting that over the past year, Russian authorities have implemented many “anti-crisis” solutions in the field of pharmaceutical market regulation, many of which have been radical in nature.

Analysts at RNC Pharma say that among such measures, in addition to the “three’s a crowd” decision, there are the one-time indexing of prices for drugs on the list of vital and essential drugs in the low-middle price segment, the introduction of compulsory licensing for certain drugs, and the conclusion of long-term contracts for the supply of drugs.

Among the many problems in the Russian pharmaceutical market, the main issue for foreign producers is the registration of medicines in Russia. Indian manufacturers preparing to register new drugs in Russia are awaiting amendments to Law No. 61-FZ “On Circulation of Medicines” to enter into force on July 1, 2015. These amendments, among other innovations, will simplify the registration process for certain categories of products.

According to Victoria Andaliba, head of the Global Pharma Company, which deals with registration of drugs, substances, medical devices and medical equipment, an applicant company had to collect a huge set of documents, including clinical trials and quality control results, for registration with the Ministry of Health. The problem with the provision of clinical trials documentation is that such studies are carried out over a period of several years, whereas during the first stage of examination of a preparation, these documents are not required.

New amendments to Law No. 61-FZ will move clinical trials outside the state registration system. This will allow companies to first apply for an approval to carry out clinical studies, to prove the efficacy, safety, and bioequivalence of a drug, and then, when the clinical trials are completed, and relevant data is obtained, they can apply for state registration of the drug. At the same time, the pharmaceutical part of the registration dossier will not become obsolete, as was the case previously.

Also, from July 1, Russia will introduce a procedure for examination of documents to determine whether a preparation can be considered an orphan drug. Unlike conventional medications, orphan drugs are developed to treat rare diseases, from which only a few people suffer, which makes it difficult to conduct clinical trials, and hence to obtain registration in Russia. With the introduction of these amendments from July 1, Russian authorities will begin accepting results of clinical trials conducted in another country.