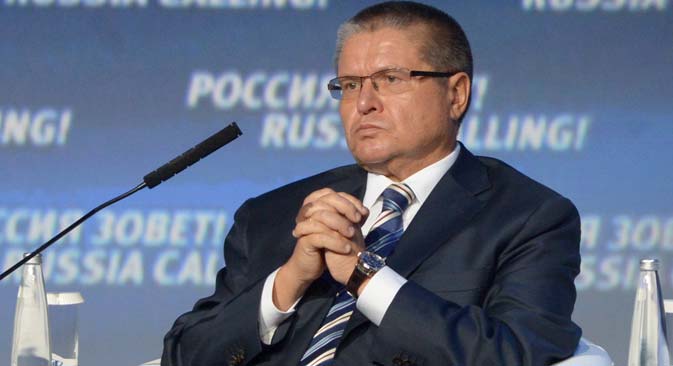 Russian companies have felt echoes of the “Make in India” concept. RIR talked with Alexey Ulyukaev, Russia’s Minister for Economic Development, about this and other developments in Russian-Indian business relations, including an upgrade of the bilateral investment protection agreement.

How successfully has trade developed between Russia and India in 2014 and in the first months of 2015? Has the volume of goods increased? What factors influence bilateral trade?

The trade turnover between our countries over the last few years has been at a level of $10 billion. Last year it was $9.5 billion. Exports from Russia to India were estimated to be $6.3 billion, and imports from India were $3.2 billion. In the first four months of 2015 bilateral trade was $2.5 billion, which is a reduction by 17.1% from the same period last year.

Negative factors influencing Russian-Indian trade are the consequences of the volatile exchange rates for the ruble in relation to the US dollar, irregularity of Russian supplies on the Russian trade line, and also a reduction in demand on the Russian internal market.

However, recent agreements on Russia’s large-scale involvement in developing Indian nuclear energy, cooperation in the oil and gas sector and in the area of jewellery manufacturing, long term contracts for the supply of oil, liquefied gas and fertilizer from Russia may play a positive role in increasing Russian-Indian trade.

Have you noticed a change in the atmosphere in Russian-Indian trade after the West placed its sanctions against Russia? Has it become harder for Russian to negotiate with Indian partners? If so, what is it connected with?

The traditional atmosphere of trust in our relations, including business relations, hasn’t changed. Additionally, our Indian colleagues are hoping to further stimulate cooperation between our countries in the backdrop of the unfolding situation. They are prepared to support Russia as a long term friend and partner.

Indian businessmen actively try to find points in common, industries and trading positions, by which they can provide maximum satisfaction for the demands of our country in trading goods. That said, India has a pragmatic approach to resolving issues on extending cooperation, first and foremost, on a mutually advantageous basis. The sanctions have stimulated Russian-Indian cooperation in terms of supplies of food products, spurring interest primarily in Indian manufacturers of milk, meat, vegetables and fruit, as well as unprocessed food.

At the same time, India also receives its advantages. Thanks to demand in the Russian market, Indian companies are ready to expand the range of products and improve their quality. Indian companies providing technology or advanced equipment (for example in oil and gas) are in demand in the Russian market, because these goods were previously imported, for example, from European countries. They are also ready to start their deliveries to Russia and to discuss the possibility of organizing production in our country.

In what areas do you see potential for expanding trade and cooperation for Russia and India? What steps can be taken by Russia to strengthen this potential?

In separate trading positions, long term contracts have already been signed for rough diamonds, crude oil, LNG. Such long-term agreements would be part of the supply for and thermal coal, fertilizer, machinery and electronic and agricultural products.

In the near future India will remain a promising market for Russian mining equipment. There is demand in this country for long down-hole mechanical treatment facilities, large draglines, shovels, bulldozers, dump trucks and drilling rigs, energy and railway equipment. There is stable demand for Russian steel of special grades for the production of automobiles

Civil aviation is a promising sector in India, with demand for regional and medium haul airplanes and also civil helicopters. There is a possibility for supplying 100 Sukhoi Superjet passenger planes to the Indian market and, in the future, the MC-21, and also civilian modifications of helicopters (Mi-172, Ka-226 etc.).

There is also the possibility of supplying medical products to India for health care facilities, mobile medical units for a rapid assessment of the epidemiological situation and the health status of the population in remote areas.

Stimulating work for the launch of the international North-South transport corridor is also of no little importance, as it will significantly reduce time for transporting goods.

Furthermore, RusNano is considering the establishment of a Russian-Indian joint fund to support joint projects in the field of high technology and technology transfer.

In general since last year the working group for strategic projects has began to choose promising projects for collaboration.

For further growth of bilateral trade, the potential of concluding an agreement on comprehensive economic cooperation between the Eurasian Economic Union and India is being developed, which will be part of a free trade agreement in goods and services.

Is it possible to extend manufacturing cooperation between Russia and India? In what spheres? In whose territory? In what timeframes?

Areas for cooperation can be both Russian and Indian. Everything depends on the products, the geography of consumption and the availability of resources and raw materials. Both countries promote establishing manufacturing in their territories, creating favourable conditions for business; free economic zones, technology parks, industrial zones.

The extension of industrial cooperation between Russia and India is possible in industries such as the production of power equipment, railway equipment, machine tools, aircraft and helicopter, tractor, equipment the metallurgical industry, and the oil, gas and chemical industries.

Can we expect in the coming years, the expansion of localized production of Russian goods in India? Are there any projects or agreements in this area? What, do you believe, restrains Russian investments in India?

In India, there is currently an assembly plant for KAMAZ automobiles. Lighting Technology has opened up in Jigani the production of lighting equipment.

On the industrial site of Reliance Industries in Jamnagar, Sibur is building a plant to produce 100,000 tons of butyl-rubber a year.

In general, India is now actively promoting a policy to localize production of imported goods at home and encourages the business community to follow the concept of "Make in India", by creating favourable conditions for production localization. Echoes of this initiative by the Indian government are felt by Russian companies. Most negotiations on the supply of new industrial products ends with the Indian side proposing to create a joint venture or technology transfer to them.

The Indian government aims to improve the business investment climate in the country within the shortest possible time, as at present, according to the World Bank Doing business report 2015, this country occupies only the 142nd position.

To create favourable conditions for mutual investment, increase safety guarantees and introduce a clear mechanism for dispute resolution, we are modernizing the intergovernmental agreement to encourage and mutual protect investments.

Can we expect a reverse flow? Will Russia change conditions offered to foreign investors from the East, given the current deteriorating relations with the West?

Economic cooperation will remain balanced between Europe and Asia, despite the current political disagreements between Russia and the West. Cooperation with European businesses continues, and investments currently being made by European companies in Russia testify to this fact. In 2015, companies such as ABB, Siemens, and Novartis will increase their production capacities. IKEA has announced new investments worth about 2 billion euros. We continue to work on creating favourable conditions for businesses operating in Russia.

At the same time, we are not talking here about a reverse in economic policy towards the Asian direction. We continue to build pragmatic trade and economic relations with dynamically growing macro-regions of the world.

Last year, Asia accounted for one-half of all global economic growth. According to the experts, Russia’s share in Asian imports does not exceed 2% today, while less than 1% of foreign direct investments from Asia come to Russia.

People in the Asia-Pacific Region know very little about current opportunities for trading with Russia, and about the investment possibilities available in our country. To remedy this situation, we will be carrying out internship exchange programs, holding forums and seminars, and creating new trade missions and business councils.

Investment cooperation with Asian countries, including China, will be carried out on a consistent and pragmatic basis. The emphasis in this case will be on the commercial quality of each project. For example, the 32 Russian-Chinese projects of the Intergovernmental Commission on Investment Cooperation are based on the principle of commercial attractiveness. Each project is examined by investment advisers from the Russian Private Equity Fund and the China Investment Corporation. This is the first experience of using such an approach to projects of the Intergovernmental Commission.

What has been the impact of increased cooperation within the BRICS countries on bilateral trade? Is there a trend towards the replacement of the US dollar and euro by rubles or rupees in bilateral trade? Are similar processes taking place in Russia’s trade relations with other partners in the BRICS?

Experts in the BRICS countries are now working on finalizing an Economic Partnership Strategy, which should be adopted at the Ufa Summit. This is a comprehensive document that will define the main directions and forms of mutual cooperation. Undoubtedly, the implementation of this strategy will have a positive impact on the expansion of not only trade, but also economic and investment cooperation among the BRICS countries. A road map for investment cooperation is also being prepared.

With regard to using rubles and rupees when carrying out mutual settlements under trade contracts, we do not see any serious regulatory restrictions here. In fact, Russian banks are already carrying out such settlements. A pioneer and leader in this sphere was Sberbank of Russia. I am confident that very soon other Russian and Indian banks will also begin carrying out settlements using national currencies.

The BRICS countries have established a joint development bank. In your opinion, what steps should participating countries now take to strengthen the economic power of the BRICS?

The most important steps will be the adoption at the Ufa Summit of the BRICS Economic Partnership Strategy, launching work on the road map for trade and investment cooperation. Work must also be completed on the organizational formation of the New Development Bank, and its portfolio should be filled with priority projects for the development of our countries. Moreover, we will be promoting the initiatives of Russia and partner countries in the economic sphere, such as, for example, cooperation in e-commerce.

This April in Moscow, we held the first meeting of the Expert Dialogue on Electronic Commerce, made recommendations based on the discussions, and are now completing work on an Action Plan in this sphere. Further joint work on the support of small and medium-sized businesses will be discussed at a roundtable that will be held in Moscow this July. Then in November of this year, we will coordinate our actions and exchange experiences on the implementation of national projects involving the creation of single window services for foreign trade operators.